l POSCO signed a 1:1 match-type social fund agreement with coal supplier Xcoal on February 24
l Both companies to plant 11,000 trees in the wildfire damage area of Okgye(Korea) as the initial operation
l The second matching fund for the forest restoration project to be named ‘Emerald’ after its green color
l Matching fund expected to expand to overseas suppliers — spreading Corporate Citizenship

POSCO signed an agreement to form ‘The Second GEM Matching Fund’ at the POSCO Center on the 24th with Byeong-Og Yoo, the Head of POSCO’s Purchasing and Investment Division, Ernie Thrasher, President of Xcoal, and Hyung-Soo Kim, CEO of Tree Planet present.

The GEM Matching Fund, established by POSCO after the declaration of the Corporate Citizens Charter in July last year, is the first global matching fund organized between steel and mining industries. The initial fund named ‘Opal,’ was created last November with Australian coal supplier Yancoal.

* In addition to the dictionary meaning of ‘jewel’, GEM also stands for ‘Go the Extra Mile.’ This symbolizes that POSCO is taking strides for the whole society.

Under the agreement, the two companies plan to each contribute 50,000 USD totaling to 100,000 USD each year in a one-to-one matching grant system. The fund will be used for community support projects of both countries on an alternating basis.

This year is the first year of the second GEM fund. The first project is a forest restoration project where more than 60 employees from both companies are set to visit Okgye, Korea, in April. Okgye suffered from a severe wildfire that devastated thousands of hectares of forests in April last year. The employees, along with residents, will plant 11,000 trees on about 4 hectares of land. Due to this ‘green’ project, the second GEM fund is named ‘Emerald’ — a green jewel.

Byeong-Og Yoo, the Head of POSCO’s Purchasing and Investment Division, said, “We are grateful to Xcoal for joining the GEM Matching Fund. We are also happy to help in restoring the Okgye area with Xcol’s past experience.”

Ernie Thrasher, president of Xcoal said, “We are honored to be able to work together with POSCO, a global corporate citizen, on creating sustainable community values.”

POSCO plans to expand the matching fund program to other overseas raw material suppliers in the future to reinforce sustainable shared growth with stakeholders. 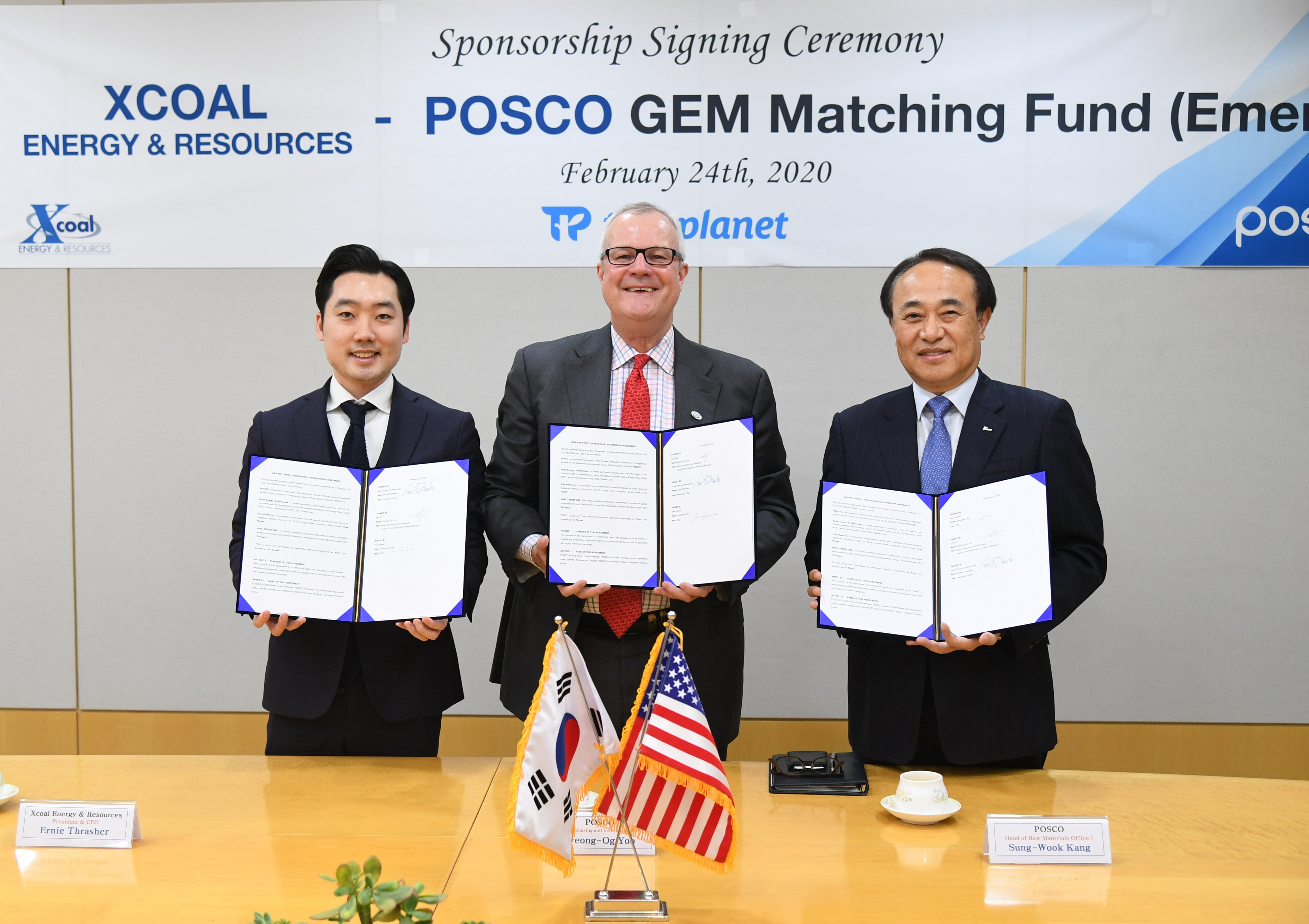 ▲ The GEM Matching Fund Signing Ceremony was held at the POSCO Center on the 24th. (From left, Hyung-Soo Kim, CEO of Triple Planet, Ernie Thrasher, President of Xcoal, and Byeong-Og Yoo, Head of POSCO Purchasing and Investment Division)