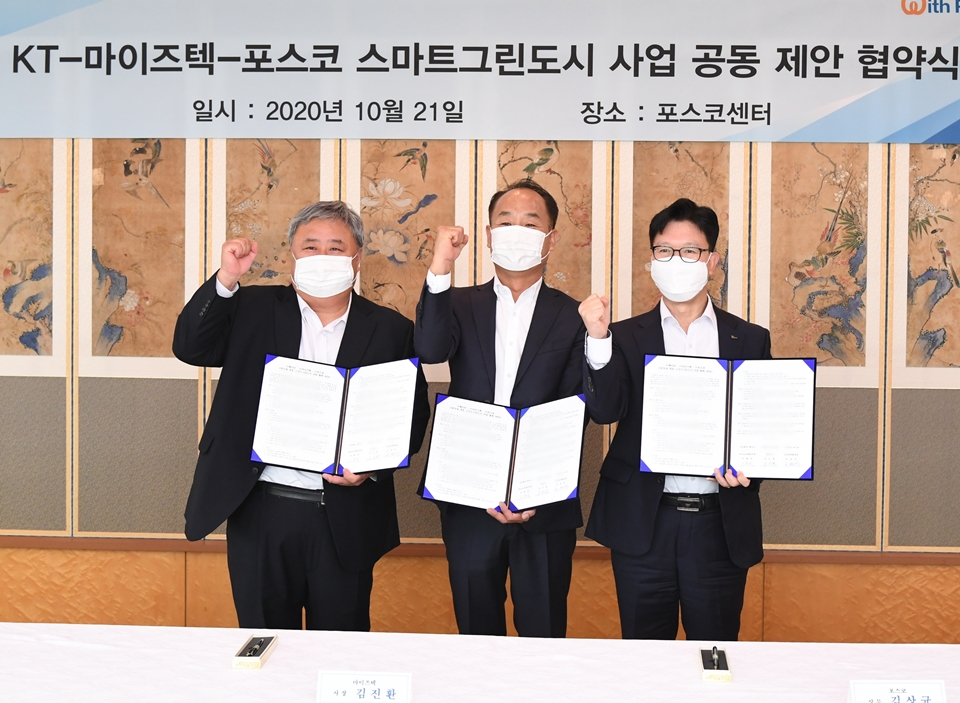 On October 21, POSCO signed a business agreement in building a ‘Smart Green City’ with KT Corp., South Korea’s major telecom company, and MYSTECH Co., Ltd, a manufacturer of eco-friendly street facilities*.
*Street facilities: Various facilities installed on the street, such as streetlights on the ground and underground water supply & drainage.

Under the agreement, the three companies are willing to work together in proposing a ‘Smart Street Facility’ to local governments and forming a task force for joint marketing.

‘Smart Street Facility’ is an eco-friendly facility developed with the combination of POSCO’s steel expertise, KT Corp.’s IoT technology, and MYSTECH Co., Ltd.’s production technique. This facility consists of two features: 1) a water supply block that stores rainwater and releases it at appropriate periods, and 2) a protection guard that prevents the rise of the ground caused by tree roots. The IoT sensor installed on the water supply block monitors the conditions of the tree and soil and calculates in real-time when water is required.

The facility is expected to prevent trees by the street from withering due to high temperatures caused by global warming and also reduce the amount of carbon dioxide in the urban area by lengthening the life cycle of the trees. Also, Smart Street Facility,’ can improve the aesthetics of the urban area by undergrounding relevant facilities.

POSCO plans to collaborate with large companies, SMEs, and venture companies in developing the ‘Smart Street Facility’. For instance, POSCO will provide PosMAC, a high corrosion-resistant steel product for the facility, along with the technology to be applicable. Next, KT Corp. will build an IT infra platform by utilizing IoT sensors, including one to monitor the amount of rainwater and another to detect leakage current. Last, MYSTECH Co., Ltd. will produce and supply the water supply block and the protection guard, which are INNOVILT products, POSCO’s premium brand of construction material.

POSCO’s Sang-Gyun Kim, KT Corp.’s Hyun-Seok Lee, and MYSTECH Co., Ltd.’s Jin-Hwan Kim were present at the signing ceremony. POSCO’s Sang-Gyun Kim said, “This project is meaningful in that large companies, SME, and a venture company will join forces to restore the green ecosystem of the local community and it will promote the eco-friendly image of steel in the construction material market.”

‘Smart Green City’ is a project established by the Korean government as part of the eight Green New Deal initiatives. It aims to realize a sustainable green city amidst the climate and environmental crisis we are facing. The Korean government plans to select 25 smart green cities and invest 290 billion KRW in total for two years from 2021.