On April 27, a groundbreaking ceremony for the extension of construction of oxygen/nitrogen storage tanks was held at Pohang Works … A total of KRW 70 billion was invested by Pohang/Gwangyang Works

Duk-il Yoon, Head of the Corporate Planning & Finance Division said, “We expect to contribute to stabilizing the supply of industrial gas of front industries such as semiconductors and shipbuilding with Korea’s largest oxygen and nitrogen facility base.”

POSCO to strengthen its foundation for entering the industrial gas market by expanding oxygen and nitrogen tanks.

On April 27, POSCO held a groundbreaking ceremony for the extension construction of oxygen/nitrogen storage tanks at the oxygen plant of Pohang Works with Duk-il Yoon, Head of the Corporate Planning & Finance Division, Baik-hee Lee, Head of Pohang Works, and Seok-mo Chung, Head of the Industrial Gases Business Project Team, in attendance.

“We expect to not only improve the stabilization of industrial gas supplies of front industries such as domestic semiconductors and shipbuilding, but also to contribute to revitalizing the local economy with Korea’s largest oxygen and nitrogen facility base that POSCO has,” said Duk-il Yoon, Head of the Corporate Planning & Finance Division.

POSCO has oxygen/nitrogen storage tanks containing 49,000 tons and 26,000 tons in Pohang and Gwangyang Works, respectively, and produces and uses oxygen and nitrogen for the combustion of iron ore and coal and elimination of carbon impurities during the steelmaking process and supplies the remainder to the outside.

Oxygen and nitrogen are essential industrial gases used in various industries such as steel as well as semiconductors, shipbuilding, chemicals, and automobiles, and the size of the domestic distribution market alone reaches about 4.5 million tons a year.  As demand for oxygen and nitrogen gas continues to increase due to the recent boom in Korea’s semiconductor and shipbuilding industries, securing stable supply chains has become important, especially for small and medium-sized companies.

Based on this, POSCO will sell 450,000 tons, which is about 10% of Korea’s annual oxygen/nitrogen distribution market demand, to distributors from 2024, regularizing external supply. The daily supply amount is about 1,200 tons, which is about 60 units of transport vehicles (tank trucks), and this is expected to contribute to stabilizing supply and demand for gas distributors and small and medium-sized consumers as well as revitalizing the local economy.

POSCO is fostering industrial gas as a new growth engine in line with its ESG management through continuous investment. POSCO plans to establish a coexistence model for the Korean industrial gas market by promoting the localization of rare gases such as neon (Ne), zenon (Xe), and krypton (Kr) with small giant companies as well as increasing the supply of oxygen and nitrogen using the facilities it has. 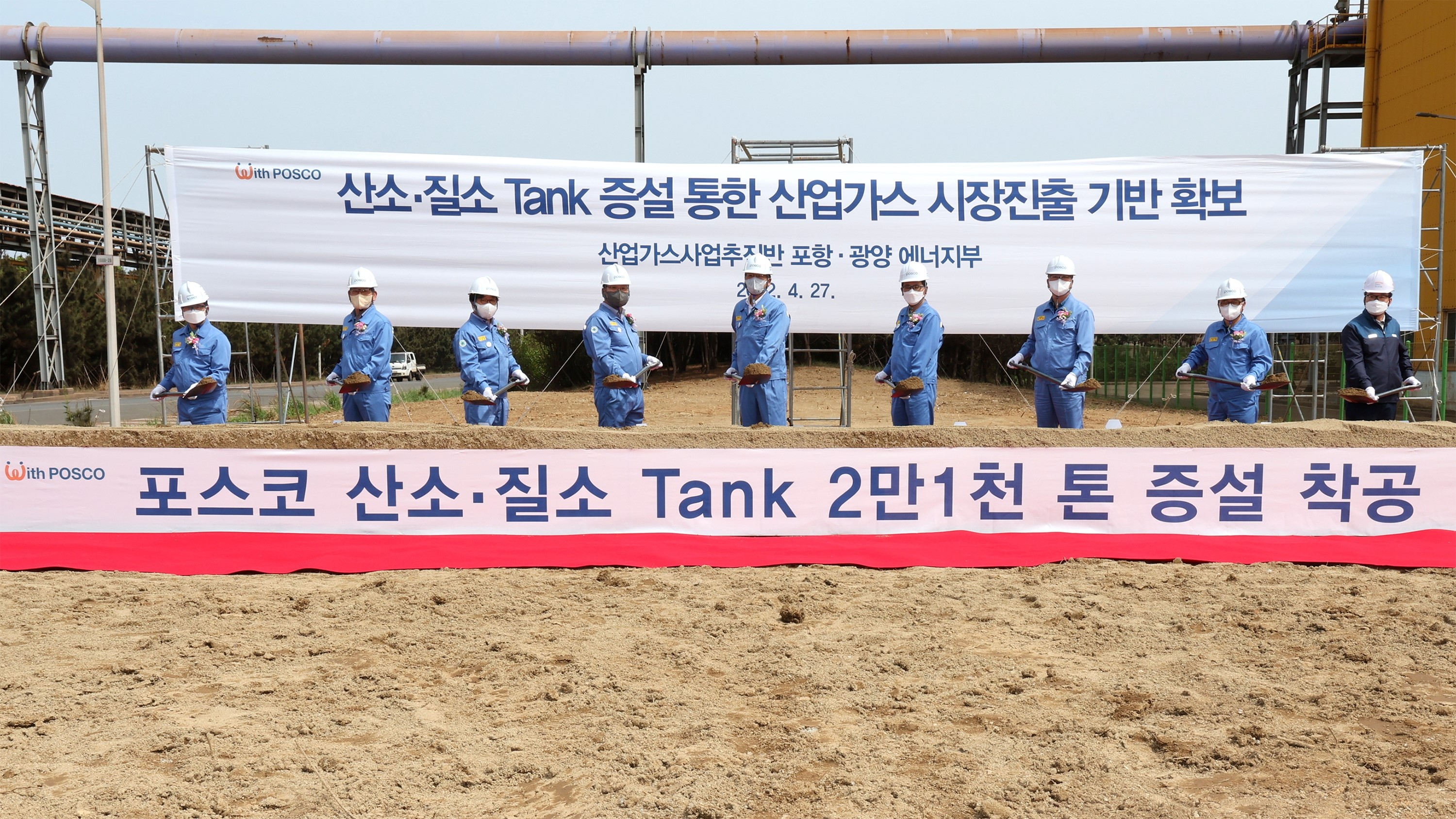 ▲ POSCO held a groundbreaking ceremony for the extension construction of oxygen/nitrogen storage tanks at Pohang Works on April 27.