POSCO spreads Saemaul Movement to deliver growth engines and hope to underdeveloped countries throughout the world.

Actively unfolding global Saemaul Movement, the new village movement, in poor areas of Africa and Asia, POSCO has been carrying out infrastructure construction projects, which are conducive to economic development ,including developing rural villages, improving housing environment and building agricultural training centers, where farming techniques are passed down and agricultural leaders are made, thereby helping them grow and become independent.

As part of this global Saemaul Movement, POSCO has been carrying out the ‘Mongolia Agricultural Leadership Training Program’ in Mongolia in partnership with Global Civic Sharing, an international development NGO.POSCO established a Local Development Training Center in Jargalant Mongolia in 2002, and has been conducting training every year for 120 of the agricultural leader candidates selected throughout Mongolia since 2010. The agricultural leadership training project is to provide skills to Mongolia which will substantially contribute to enhancing incomes for local rural villages. Such skills include the practice of greenhouse agricultural and the building of cattle sheds.

The project is also designed to promote communal spirit for the empowerment of leadership qualities and abilities. So far, POSCO has conducted 14 different agricultural leadership trainings along with5 lots of the leadership camp, and 667 trainees have completed the training course. 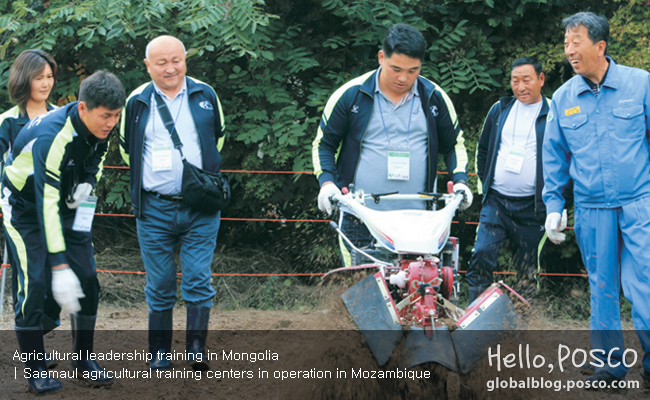 Among them, POSCO selects some 10 outstanding trainees each year and provides them with a study tour to S. Korea which includes a field trip to ‘Eco-Farm’, an eco-friendly agriculture support center operated by POSCO in the city of Pohang. 11 outstanding trainees have been selected this year.

They arrived in S. Korea on September 29, and were given with advanced agricultural techniques of the country. For four days from September 30, the Mongolian trainees received practical training necessary for improving agricultural techniques, including pasturage plants cultivation, potato cultivation, agricultural machinery and eco-friendly material manufacturing, as well as residential leadership training on how to convince residents, local issue solving techniques, economic development strategy, and more.

While paying a visit to the memorial hall in the birthplace of Saemaul Movement, Pohang steel mill and POSCO center, they also had a time to appreciate and experience S. Korea and POSCO, which have accomplished a great deal in developing the economy based on the Saemaul Movement. After visiting Pohang steel mill and the forestation memorial forest in Goryeong-gun on October 4, the trainees will move to Seoul where they have time to explore and experience the culture of S. Korea, before returning to their country on October 6. While spreading the Saemaul development model to African and Asian countries, POSCO has demonstrated a variety of accomplishments.

In Mozambique and Zimbabwe of Africa, POSCO built Saemaul agricultural training centers, teaching specialized knowledge and techniques about agriculture and stockbreeding, while increasing agricultural production and contributing to solve Africa’s famine problem. In Ethiopia, meanwhile, the Saemaul Development Project is under way, with overseas volunteers including the retirees of POSCO along with their family members stepping up their efforts to improve village environments as well as enhance the income of their neighborhoods. When it comes to Asia, POSCO is promoting Dream Village project to develop a village for non-homeowners in Vietnam, and carrying out the global Saemaul Movement in Indonesia, Nepal and Mongolia.