POSCO Shows Compassion to Every Corner of China

There can be a number of ways to make contributions for those in needs. It could be building houses in a remote area of India or supporting multicultural families to settle down in a new environment. One can even establish a children development center to provide education and hopes. In April, POSCO China participated in two major CSR activities; making an ecological park in Beijing and contributing for the Sichuan earthquake victims. Today, I would like to introduce how POSCO China did its best for not only being the leading steel manufacturer in China but also integrating with local communities across the nation to create better quality of lives.

On April 24, I visited Dawangjing Park in Chaoyang district as a member of POSCO China. Around 200 volunteers from POSCO China, POSCO E&C, ICT, POSRI and Daewoo International gathered around to plant 300 trees for enlightening the urban area. POSCO Beijing Office is currently under construction just around the corner of Dawangjjing Park and it is due to be completed by 2014. Near the site, POSCO employees planted platycarya strobilaceas, goldenrains and forsythias for the lungs of Beijing. Every time I participate in POSCO China’s CSR activities, I can feel positive energy surrounding me and this tree-planting event was no different. 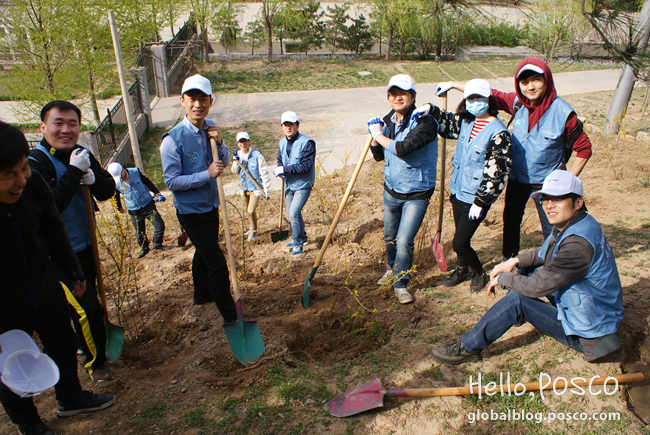 It has been four years since POSCO China first initiated its annual tree-planting activity. With a mandate of voluntarily protecting the environment, about 2,000 seeds were planted for the past four springs by volunteers. From 2011, POSCO China has also been creating ‘POSCO Family Gardens’ in conjunction with Dawangjing Park. Nowadays, you can easily spot the signs around the park telling visitors about POSCO China’s participation in the urban green project. 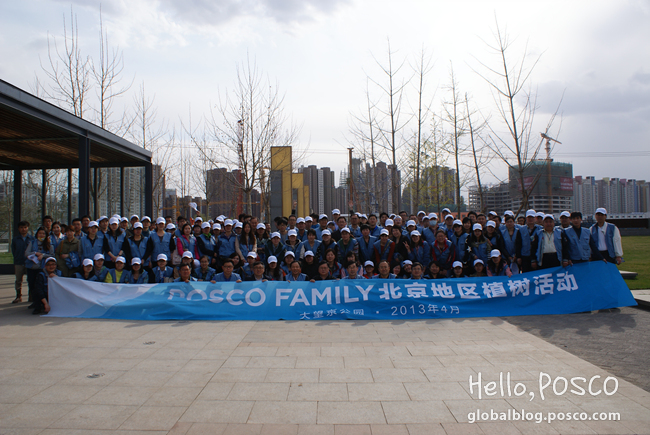 POSCO China Chairman and President Suk-chul Kwon believes the tree-planting activity is a meaningful project from a long-term point of view and asked the employees of POSCO China for their continuous supports of flourishing the city in green. After completing the day’s voluntary event, I realized how important it was for a corporation to oblige social responsibility to live with the local community. It felt like as if we were all members of a real family, a family enjoying the festival for themselves.

Speaking of family, we should share not only the joys but also the pains suffered by other members of society. Over 1,800 kilometers away from the park in Beijing, there was a horrible earthquake which shocked the world earlier in April. The earthquake in Sichuan province killed at least 186 people, injured more than 11,000 and left most of the communities around Ya’an city homeless. It didn’t matter how far the area was or how shattering the damages were. Without any hesitation, POSCO China’s employees raised CNY 3 million (USD 490,000) voluntarily for relief aid and delivered it to China’s Red Cross.

In the meeting with Wang Rupeng, the Secretary-General of China’s Red Cross, the Director of POSCO China Corporate Staff Department, Kam Gyu-sik said “As a Korean company operating in China, it is our natural obligation to jointly take action for the disaster.” “We hope this donation from the employees of POSCO China could be utilized usefully for swift recovery of the damaged district,” he added. Wang expressed his gratitude for the relief aid amid the current urgent situation and assured the help from POSCO China would be used for medical supports and reliving the sufferers in Ya’an. It is not the first time POSCO China provided its kind and generous hands for the victims of natural disasters in China. A total of about CNY 10 million (USD 1.65 million) was donated for Wenchuan earthquake in 2008, Yushu earthquake and Xinan drought in 2010, and the earthquake in Sichuan Province this year. 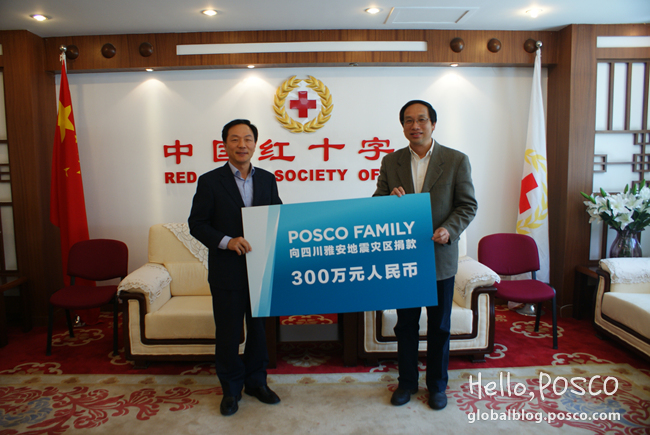 For me, it is hard to keep in touch with the people living in a remote place, especially in China, to offer helps for such disasters. As POSCO China did this time, making a donation was a great opportunity to close the gap between me and those in need of supports.

There are many other CSR activities POSCO China is engaging with for the locals. Although China and Korea have different cultures and languages, it is important to share the same goal as a respected global corporation. Our goal is to breathe, live and integrate with Chinese people as a leading global steel manufacturer. I will continue delivering more heart-warming stories from POSCO China.