POSCO reveals ‘Green Tomorrow: The Man from the Future’ campaign 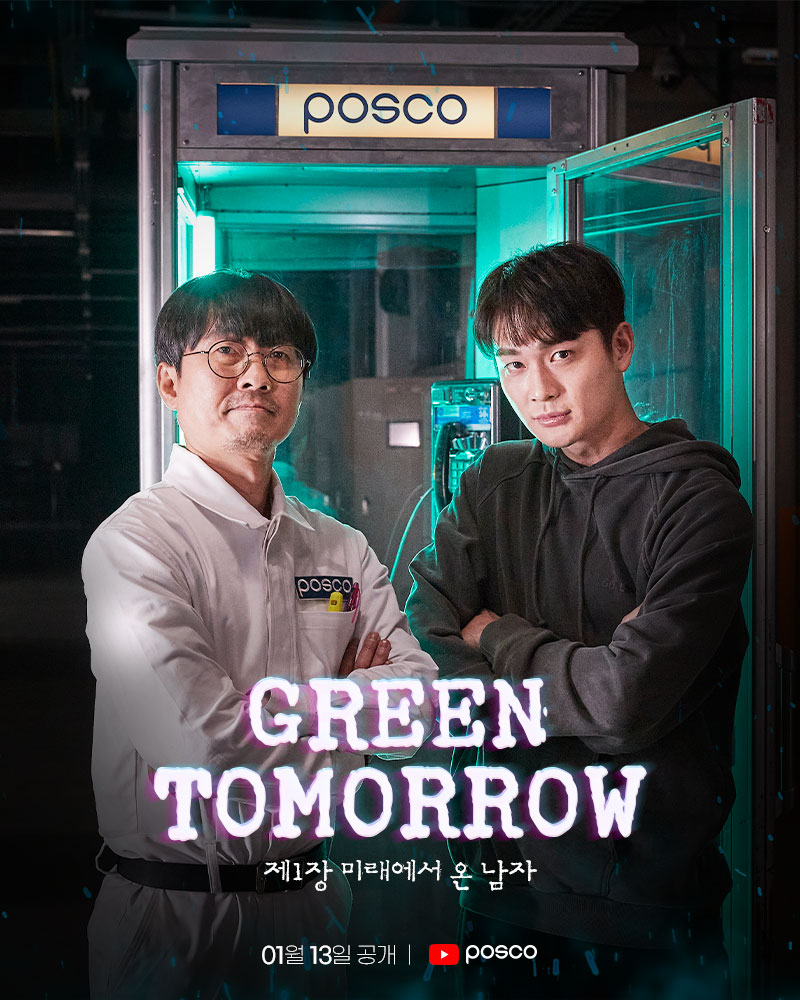 POSCO released “Green Tomorrow: The Man from the Future,” the main episode of a new media green campaign, on YouTube on January 13, following a teaser posted on December 23 last year.

In the teaser video ‘The secret behind Fe2O3+3H2‘, Po Seok-ho escapes from a searchlight and runs away. Who is this mysterious character and what does the world-saving formula mean? Here are some points that you should find interesting and behind-the-scenes stories related to production. Let’s dive into the details.

Po Seok-ho hurriedly runs away to avoid the black priest, also known as carbon villains. While thinking about getting away from this situation, he comes up with the book Environment 1-1 that he found at “Suhwan Bookstore.” (Check out our previous video for details about the book) 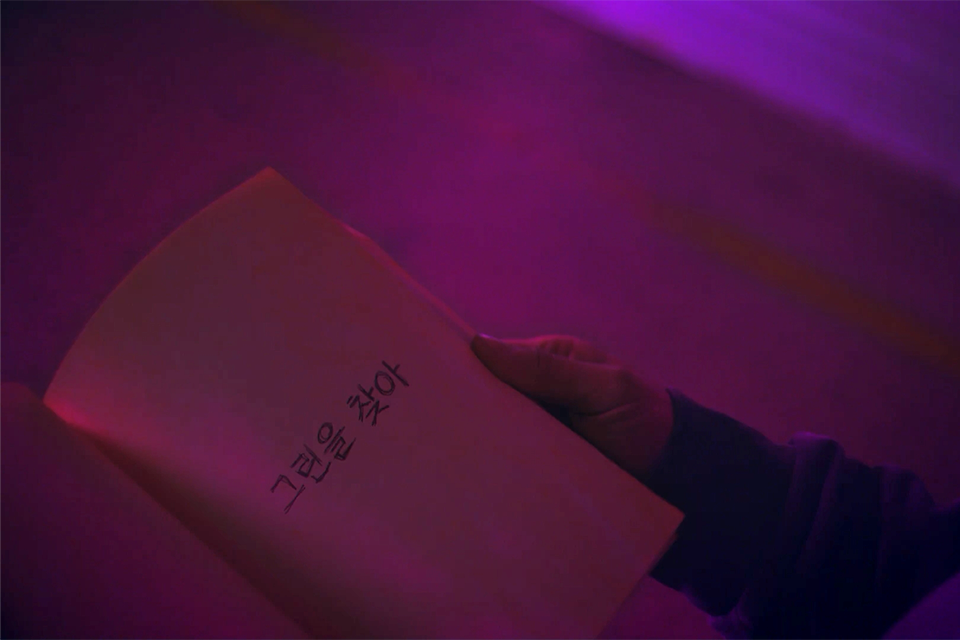 Seok-ho manages to escape from their clutches with the help of the book Environment 1-1. The best moment is perhaps when he and the black priests are engaged in a thrilling chase. The areas around Daerim Arcade and Sewoon Arcade in Eulji-ro, Seoul, often featured in movies, were selected as filming locations. The electronic displays, posters, and signboards on the scene were exquisitely used as clues. Don’t miss out on the fun of finding objects used as guideposts to avoid the chase in the video! 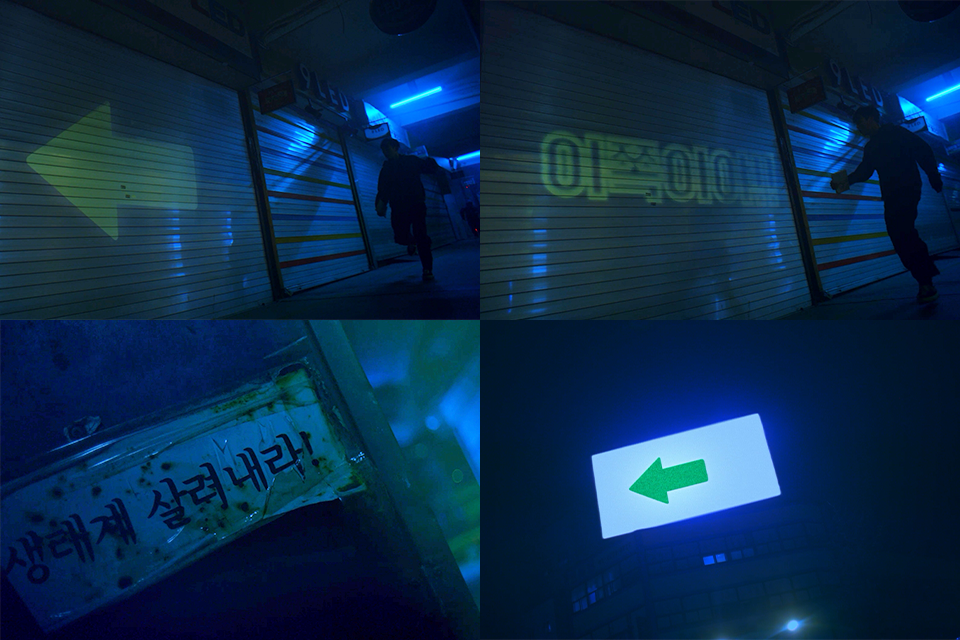 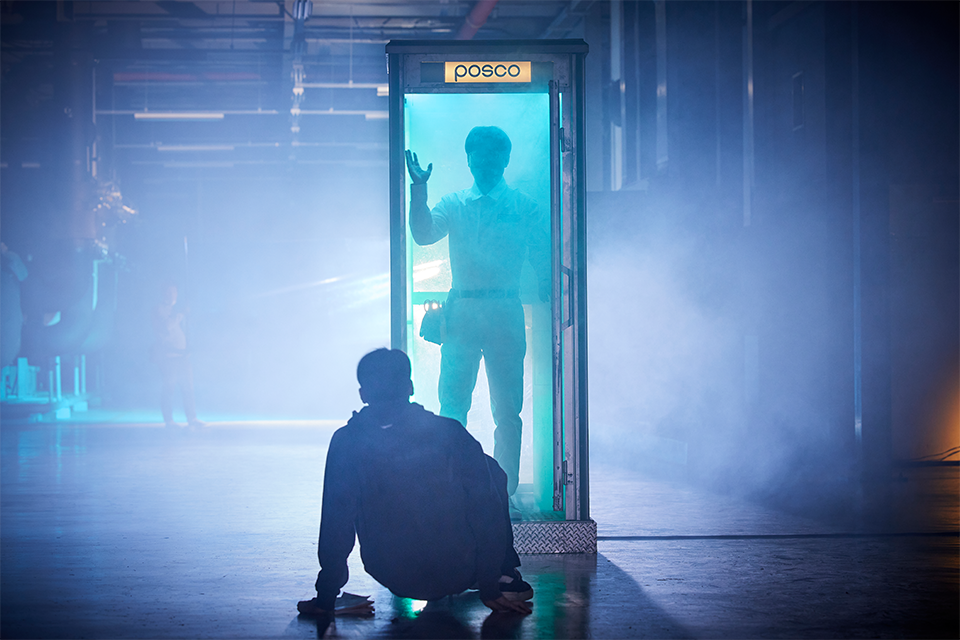 As he approaches the phone booth amid tension, slowly a silhouette becomes clear… and it’s none other than Jang Hang-jun, who reveals himself out of the fog. Jang is a famous film director who features on various entertainment shows with witty words. In this POSCO’s new media campaign, he played the future “Po Seok-ho,” who came from 2050 in a public telephone time machine. Po Seok-ho in 2022 (now, actor Cho Yoon-woo), who led this story from the teaser, hinting at the prologue of “Green Tomorrow,” turned out to be a MacGuffin*.
*A MacGuffin is a dramatic device that appears important in a movie but doesn’t change the story. Irrelevant to the story, the device attracts the audience’s attention and prompts questions and confusion instead of foreshadowing in a play. In other words, a MacGuffin refers to an event, situation, character, or prop that arises the audience’s curiosity, allows them to question, or helps them maintain tense. Directors reveal something, in advance, a MacGuffin, to stimulate the audience’s voluntary reasoning and keep them under suspense all through the show.

Doctor Po Seok-ho from the future starts asking questions such as “What year is it now?”, “Has the formula been found yet?” What has brought him back to the year 2022? Imagine what you would feel if you faced “yourself” from 2050 and check out what happened in the “Po Seok-ho vs. Po Seok-ho” situation in the video. 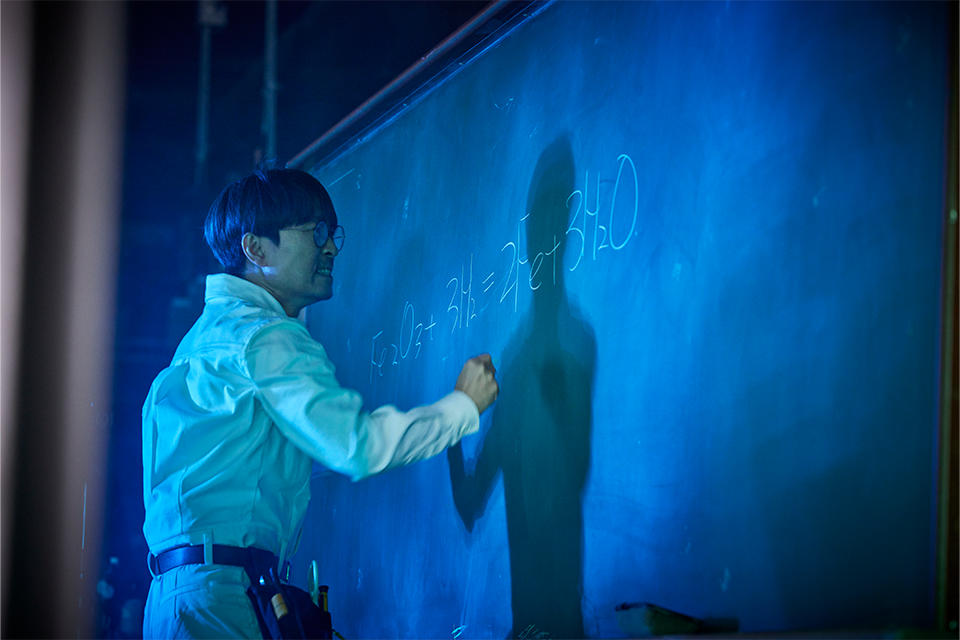 A blackboard suddenly appears, and Dr. Po Seok-ho (from the future) raves about the chemical formula ‘Fe2O3+3H2=2Fe+3H2O’ for POSCO’s Hydrogen Reduction Ironmaking, which will save the world. According to his lecture, it can be defined as follows. 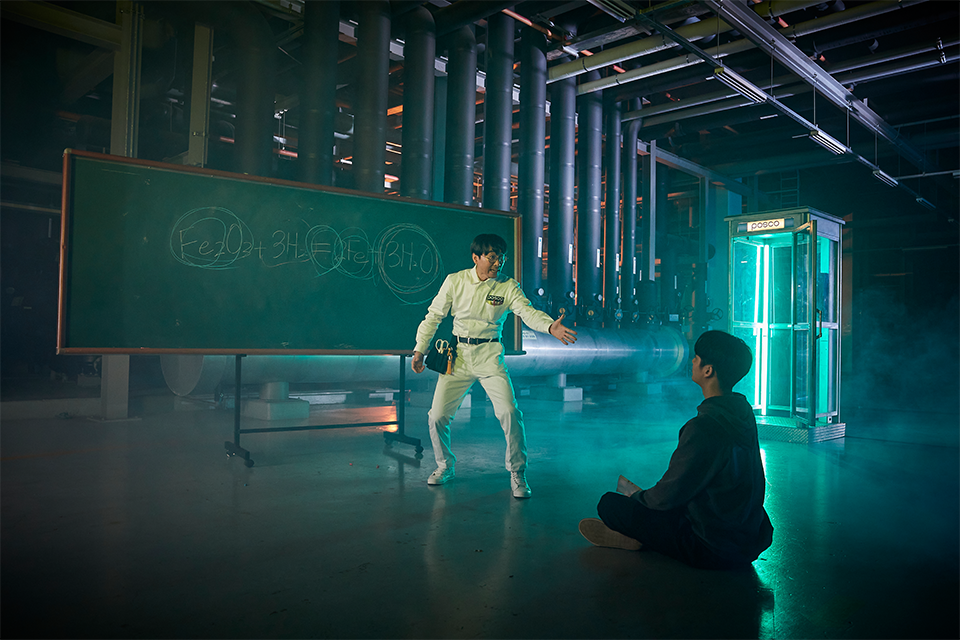 “The formula Fe2O3+3H2=2Fe+3H2O is something like a digestive medicine. In a nutshell, when you have indigestion, a smelly burp or fart comes out. However, if you digest well, this is not the case. Similarly, if we start the Hydrogen Reduction Ironmaking method, we will get only pure iron and water, as iron is processed perfectly.”

“Is there a clean method that does not generate carbon dioxide?”
After such considerations, POSCO finally developed an eco-friendly Hydrogen Reduction Ironmaking method. The idea is to use hydrogen instead of coal as a reducing agent for iron ore. In this method, molten metal can be manufactured, not generating carbon dioxide since the oxygen in iron ore reacts with hydrogen, just leaving the water. In other words, POSCO is developing a green ironmaking method that does not generate carbon dioxide for the future environment on the planet earth.

Dr. Po Seok-ho (from the future) says that Hydrogen Reduction Ironmaking is the first key to saving the world and emphasizes to Po Seok-ho (now) that they should go to Park1538 to prevent carbon from destroying the earth. And then Dr. Po pushes Po Seok-ho (now) into the public telephone booth he took when he came here…

What will be the duo’s fate? Much attention is focused on how the story will unfold in the next episode of “Green Tomorrow.” 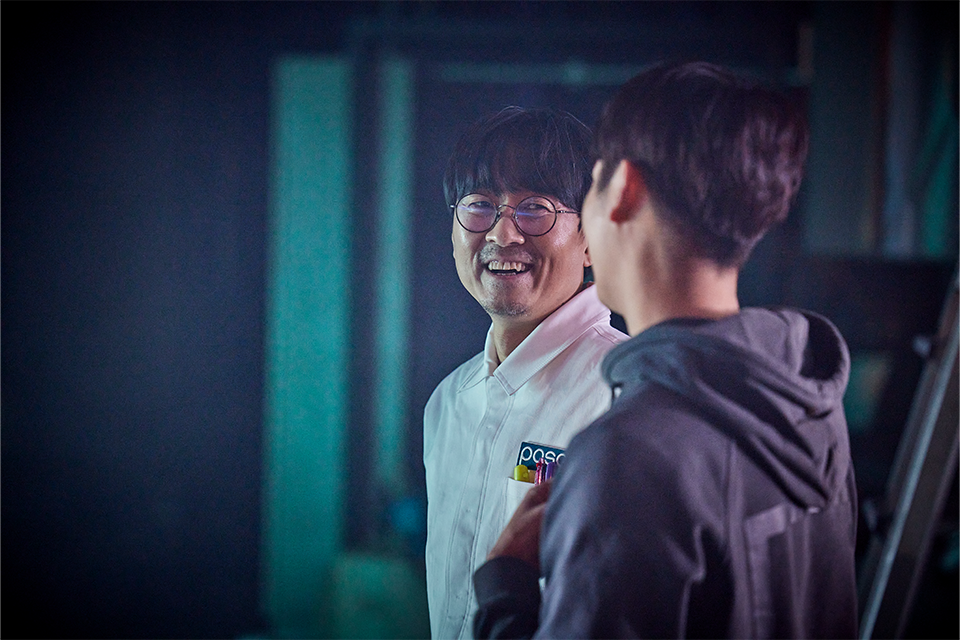 Director Jang Hang-jun’s humorous lines and ad-libs made the staff laugh all the time. He interpreted the role of Po Seok-ho (from the future) with his style beyond the script. Not only that, his witty facial expressions added more fun to the content. Lines such as “Page 25, page 25, page 25,” “Roger that,” “Geez, all this smoke,” and the gesture “Ah, farts, prrt, prrt, prrtt!” are where you can feel his wit. He even quickly memorized the formula for Hydrogen Reduction Ironmaking, which is difficult to learn, proving his charm and intelligence again. 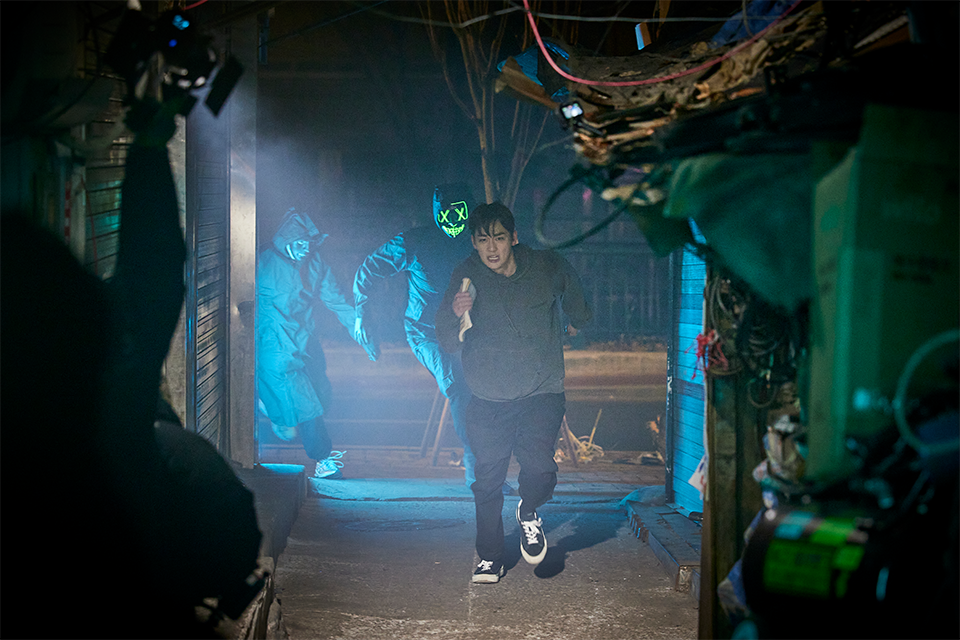 Actor Cho Yoon-woo easily performed the night chase scene with the carbon villains, even though the scene required a lot of physical strength for long hours. His thrilling acting, where he checked the clues that appeared unexpectedly during a suspenseful chase like a tug-of-war, increased tension and immersion in the beginning. After making his debut as an actor in the television series Cool Guys, Hot Ramen, he has shown a wide acting range, such as high school student, secretary, ice hockey player, and Hwarang with a great sensibility. He is also actively engaged in activities that capture the attention of viewers. 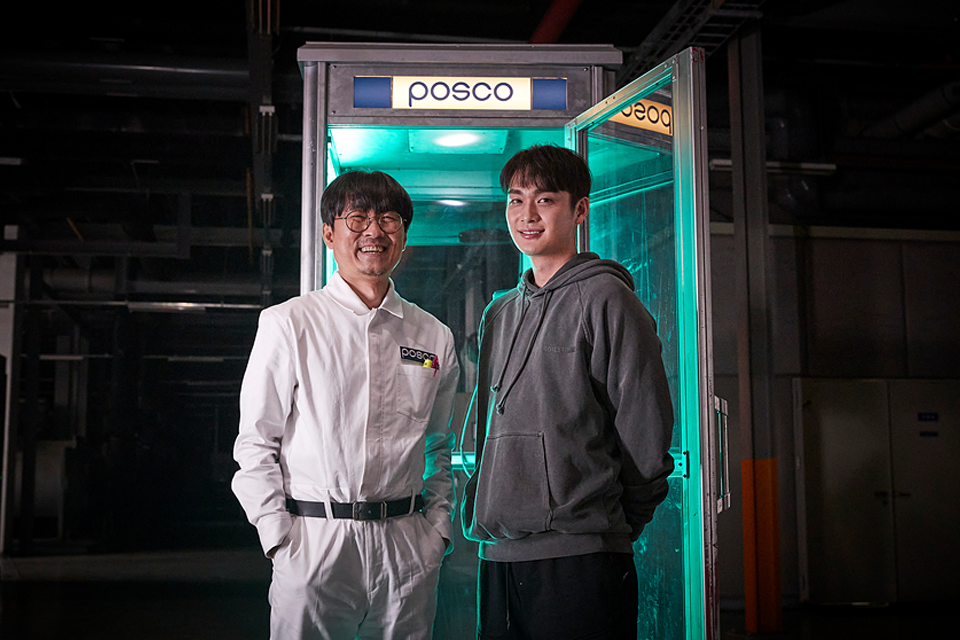 In the last scene of “Green Tomorrow: The Man from the Future,” the two Po Seok-hos get in the public telephone booth and start their journey to Park1538. When recalling the words of Dr. Po Seok-ho, who said that Hydrogen Reduction Ironmaking is the first key to saving the world, we can notice that the journey of the two has just begun. Please check out our upcoming series of “Green Tomorrow” and and find out more about POSCO’s plans to make our world a better place.