l On March 18, POSCO, KIST, and RIST sign an agreement on advancing technology for ammonia hydrogen extraction
l The enhanced technology will enable hydrogen extraction from ammonia without Greenhouse gas emissions and will be supplied for commercial use and for domestic power plants in the future
l On March 8th, Origin Energy, Australia’s largest electricity provider & gas supplier, signs an agreement with POSCO regarding the production of green hydrogen 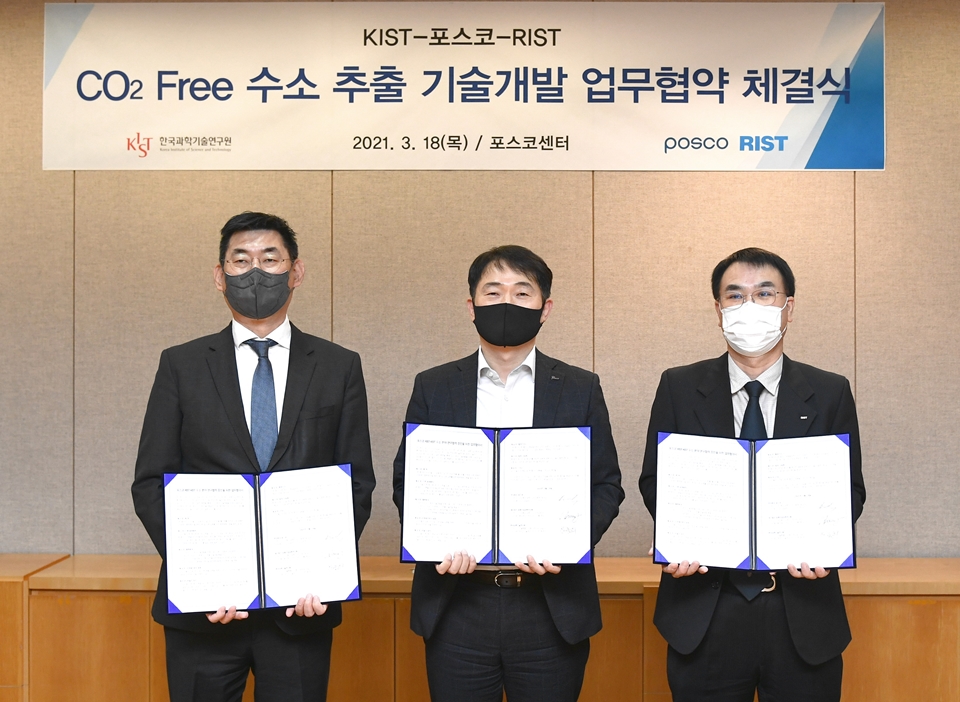 At the event, the Head of POSCO Hydrogen Business Division, Ju-Ik Cho, said, “POSCO will succeed in commercializing technology that enables ammonia extraction from hydrogen, a key technology required for utilizing hydrogen energy, and contribute to advancing the green hydrogen era in Korea.”

Currently, numerous technologies are discussed as methods of transporting hydrogen, including hydrogen liquefaction, ammonia synthesis, and other new technologies. Among them, ammonia synthesis is considered the most efficient one. This is because when hydrogen is synthesized into ammonia, there is no need to set up a new distribution network for transportation, and the loss rate in the shipping process is low. However, while the technology to synthesize hydrogen into ammonia has already been commercialized, the technology to extract hydrogen from ammonia is still in its early stages.

Accordingly, together with KIST and RIST, POSCO plans to improve its competitiveness in the green hydrogen business by promoting technology advancement to extract hydrogen from ammonia in large quantities. With this advancement, the company will supply overseas green hydrogen as raw material and energy source for the domestic industry and power plants in the future.

KIST had successfully devised technology to extract high-purity hydrogen from ammonia last year. Through its cooperation with POSCO, KIST plans to come up with a catalyst that can enable efficient hydrogen extraction from ammonia.

RIST is working on expanding large-capacity ammonia hydrogen extraction to a commercial-grade process.

POSCO and Origin Energy will jointly conduct a study regarding the project feasibility by the end of 2021. If concluded to be competitive, both companies plan to pursue the project on full-scale. The idea is this — hydrogen produced in Australia will be synthesized into ammonia, while POSCO will adopt it to extract and supply hydrogen.

The green hydrogen business model currently implemented by POSCO is to produce hydrogen through water electrolysis made from renewable energy, such as wind power and solar power. The hydrogen is synthesized into ammonia to increase efficiency, then transported and stored. Finally, hydrogen is extracted and used as raw material and energy source for industrial and power plants.

Through the continuous promotion in the hydrogen business, including technical cooperation in extracting ammonia hydrogen and participation in green hydrogen projects, POSCO plans to lay the foundation for a value chain of green hydrogen, consisting of production, transport, storage, and application. Also, POSCO will design products and solutions for hydrogen storage and transportation to pioneer in establishing infrastructure.

Meanwhile, in December 2020, POSCO announced its vision of becoming a green hydrogen company that leads the hydrogen economy with the ultimate target to establish a hydrogen production capacity of 5 million tons and achieve 30 trillion KRW in hydrogen sales by 2050.