POSCO succeeded in mass-producing high-manganese steel for cryogenic use for the first time in the world. Also, POSCO received approval for its cryogenic high manganese steel* as the LNG storage and transportation material after passing the material stability and suitability certification of global energy firm ExxonMobil.

*High manganese steel is a new material developed by POSCO for the first time in the world in 2013. It is an innovative steel material that specializes in various performances such as high strength, wear resistance, cryogenic toughness, and non-magneticity by adding a large amount of manganese (Mn, 10-30%) to iron.

ExxonMobil invested projects require its technology approval for participation. Through this approval, POSCO laid the technological foundation for supplying high manganese steel for cryogenic use.

POSCO and ExxonMobil had a technical qualification ceremony for their cryogenic high manganese steel at the WGC2022 in Daegu on May 25th. Se-don Choo, Head of POSCO Technical Research Laboratories and ExxonMobil Senior Vice President Peter Clarke attended the event.

High manganese steel for cryogenic application is a special steel with excellent impact toughness and strength in extreme environments below -162℃, the temperature for maintaining LNG in a liquid state. High manganese steel is evaluated for its outstanding price competitiveness because its uses globally abundant and inexpensive manganese, whereas other materials had to increase the content of expensive components such as nickel, chromium, and aluminum. High-manganese steel is emerging as a new alternative for domestic and foreign plant companies suffering difficulties securing materials from the increase in raw material prices and continued global supply chain instability.

Head of POSCO Technical Research Laboratories Se-don Choo said, “The two companies led the world’s first mass production of high manganese steel by transparently sharing research results based on mutual trust and strengthening technological cooperation.” “I hope that cryogenic high manganese steel approved this time will lead to the supply for global projects, creating another success story for both companies,” he added.

ExxonMobil Senior Vice President Peter Clarke remarked, “The achievement of this successful collaboration is the outcome of the convergence of ExxonMobil’s expertise and POSCO’s world-class technology.” “We will continue to team up to develop technologies in various industrial applications, including LNG,” he said.

In July 2020, POSCO started the technology certification process to promote the application of its high manganese steel to eco-friendly LNG terminals to be built by ExxonMobil around the world. The companies simplified the process and reduced the period by more than twice by POSCO submitting material test results and samples and ExxonMobil conducting only the essential verifications such as processability and stability evaluation. This was possible with high manganese steel already applied to the Gwangyang LNG storage tank No. 5 and fuel tanks of about 20 LNG-powered ships and crude oil carriers and ExxonMobil’s trust in POSCO’s technology from the past.

The two firms completed the two-year certification process with the delivery of the certificate in the ceremony and decided to continue discussions to apply POSCO’s high manganese steel to ExxonMobil’s overseas LNG projects. Furthermore, they agreed to technological cooperation to lead eco-friendly fields such as hydrogen projects and CCUS, in addition to developing new applications for high manganese steel.

Meanwhile, POSCO won the ‘Deals of Distinction Award’ in the chemical, energy, environment, and materials fields at the annual meeting of the 2017 LES (Licensing Executives Society) by successfully supplying high manganese steel for slurry pipe, developed for the first time in the world in 2013, to ExxonMobil’s curl oil sand project. At the time, POSCO and ExxonMobil conducted joint research on pipe welding, manufacturing, and field testing of slurry pipes* from 2012, the initial stage of development. 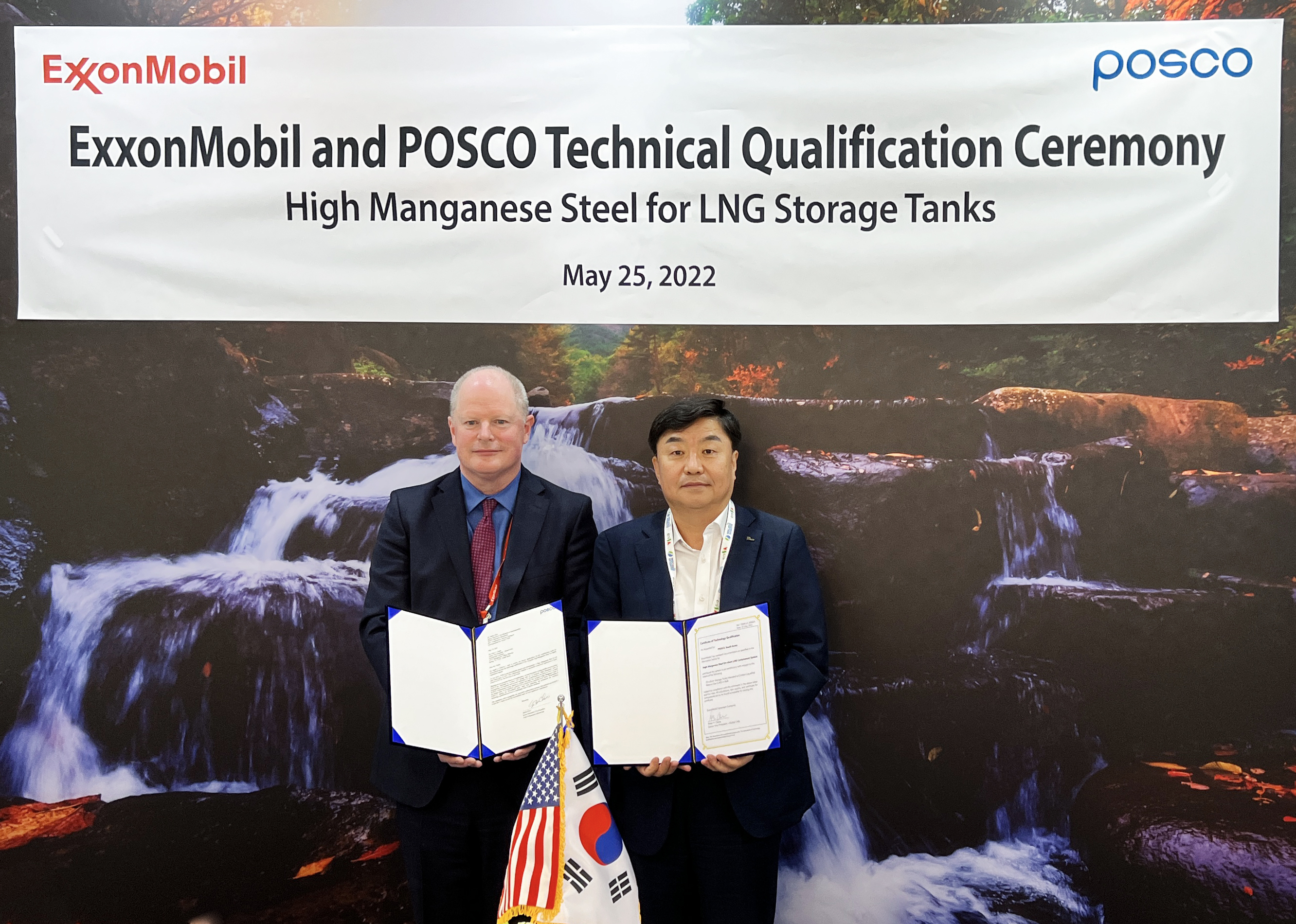