POSCO is to enhance its technical partnership with global company ExxonMobil to expand the use of High manganese steel* which POSCO has succeeded in mass-producing for the first time in the world.
* High manganese steel: An innovative steel material with large amounts of manganese (Mn, 10% to 27%) added to improve performance, such as high strength, low-temperature toughness, wear resistance, and non-magnetic properties.

On October 7 (local time), an agreement ceremony was held between POSCO’s Technical Research Laboratories in Pohang, ExxonMobil’s Research & Engineering (RE) in New Jersey, and Upstream Research Co. (URC) in Texas. The agreement aims to develop High manganese steel and accelerate the application of the material in the market. Due to the aftermath of the COVID-19 pandemic, the event was conducted via online without direct contact.

Duk-Lak Lee, Head of POSCO Technical Research Laboratories, Tristan Aspray, President of ExxonMobil URC, and Vijay Swarup, Vice President of ExxonMobil RE, attended the signing ceremony. They pledged to cooperate in technology development and expand the use of High manganese steel in global LNG projects as well as in the overall energy industry. Since RE is in charge of basic research of materials, and URC focuses on the field application of new materials, the participation of the two is expected to accelerate the commercial development of High manganese steel.

Both companies agreed on applying cryogenic high manganese steel to storage tanks for ExxonMobil’s global LNG projects to be conducted in the future. High manganese steel was approved to be used as materials for onshore LNG storage tanks by the Ministry of Trade, Industry, and Energy (MOTIE) last year. The material was first applied to Tank #5 of Gwangyang LNG Terminal and received verification for its performance and safety.

At the event, ExxonMobil’s Tristan Aspray said, “We look forward to the strategic and long-term technical cooperation of both companies brought together by combining ExxonMobil’s expertise in metal-use technology and POSCO’s world-class steel technology.” Vice President Vijay Swarup also expressed his anticipation saying, “The most challenging task facing society today would be providing stable energy supply while reducing environmental impact. We will be able to find the answer in technological innovation through this cooperation with POSCO.” Duk-Lak Lee, Head of POSCO Technical Research Laboratories, responded by saying, “Both companies will continue to cooperate in developing technologies in eco-friendly areas, such as to reduce carbon dioxide, as well as steel and application technologies.”

POSCO and ExxonMobil had previously co-developed slurry pipes with High manganese steel eight years ago, as a result of technical cooperation for five years from 2012 to 2017. Slurry pipes are used to transport oil sands (sands containing crude oil). At the time, both companies devoted themselves to develop welding technology and pipe manufacturing processes optimized for High manganese steel with joint research starting from the pipe production stage to the field testing stage. As a result of such cooperation, the two companies succeeded in mass-producing the product and, in 2017, won the Annual Deals of Distinction Award for Chemicals, Energy, Environment, and Materials at the annual meeting of the Licensing Executives Society (LES).

The successful results that POSCO and ExxonMobil achieved together served as an opportunity to verify the excellence and potential of high manganese steel and the two companies have continued in their cooperative relationship ever since.

Meanwhile, cryogenic high manganese steel was developed by POSCO for the first time in the world and was listed on the Korean Industrial Standards (KS) in 2014. It also received approval from the American Society for Testing and Materials (ASTM) in 2017 and from the International Organization for Standardization (ISO) in 2018. In 2018, the material was certified to be used in fabricating onshore pressure vessels (KGS AC1111) and LNG storage tanks for ships (IMO Interim Guidelines), and also onshore LNG storage tanks (KGS AC115) in 2019. 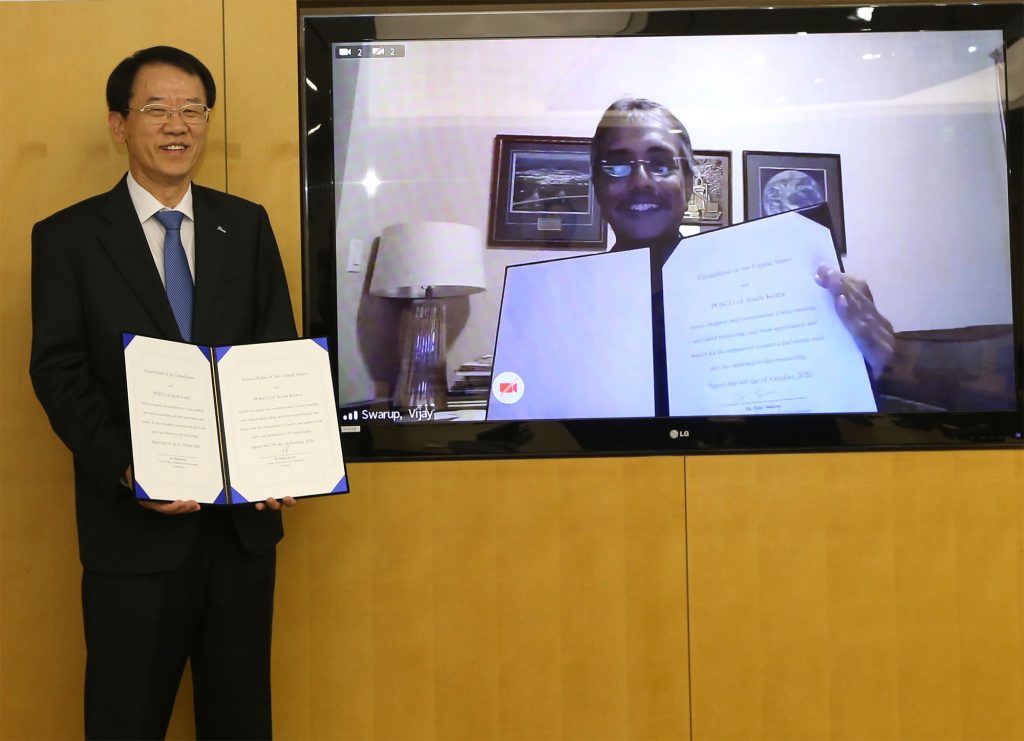