I have been reading fabulous stories shared by POSCO Global Storytellers and I must say, we are very impressed here in POSCO Japan with their great achievements around the world.

Today, as a proud member of POSCO Family and a Global Storyteller, I would like to introduce POSCO Japan’s various activities over the past few months.

In line with the POSCO Volunteer Week in May, POSCO Japan participated in the global campaign to make the world a better place to live together. On May 25th, POSCO Japan’s employees and student volunteers visited Arakawa, a town located on the outskirt of Tokyo, to clean up the riverside. 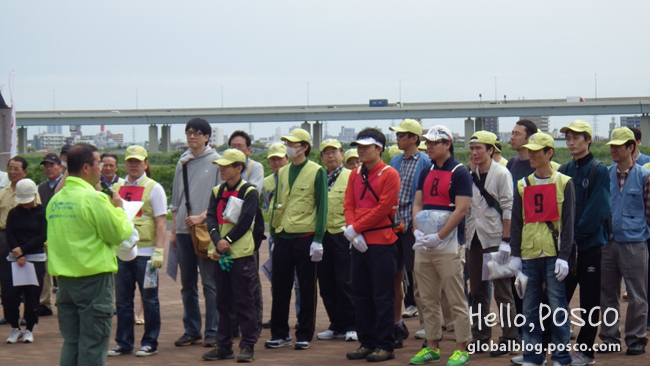 A total of 80 volunteers gathered up from the early Saturday morning. When the roll-call was finished, we were briefed about the safety cautions and how the day’s cleaning session would go ahead, as the site was right next to the river. 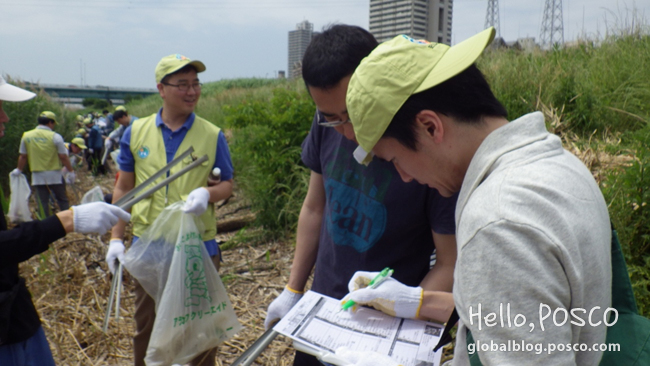 Three bin bags in different colors and a list were given to each of us to find out what kind of trashes were collected from the River Arakawa. This would be useful for us and the local community later on to figure out ways to prevent the riverside from further pollution. 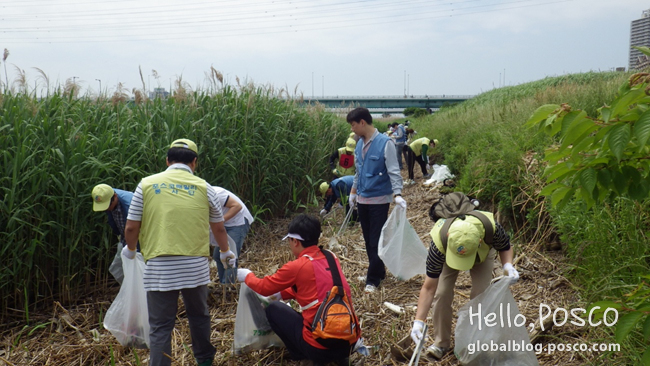 It did not take long before we found all sorts of trashes around the River Arakawa. We splited into groups and each group took charge of different sections to clean up the area more efficiently. It was not an easy task at first, but soon, smiles flowed amid the POSCO volunteers’ faces as we realized what we were doing would beautify the environment. 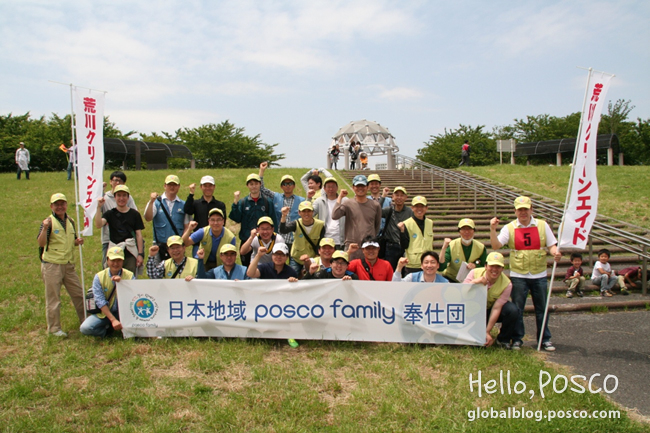 POSCO Japan is also engaging with local community to save the environment. On every Thursday, a number of POSCO Japan employees gathered up to take care of the flowerbeds near the POSCO Japan’s office in Ginza, Tokyo. 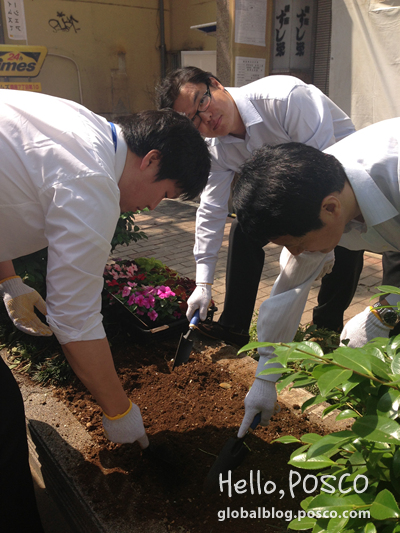 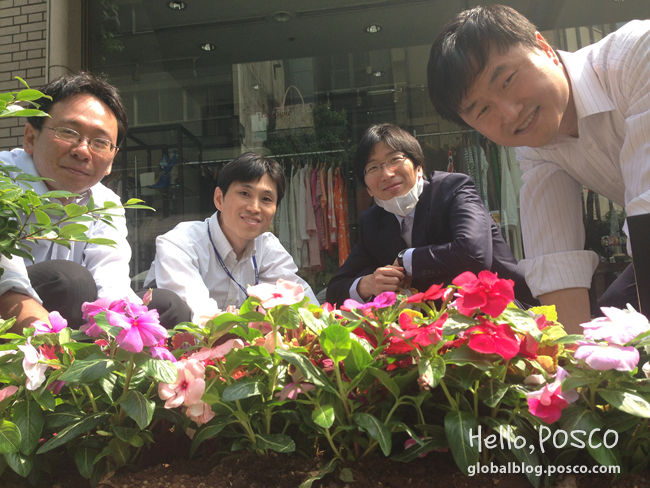 Japanese and Korean Employees Celebrating the Beginning of Hot Summer Together

As the hot summer is starting to set in, POSCO Japan held a small event at our office to celebrate Korea’s ‘Chobok Day’ on July 12th. According to the lunar calendar, Chobok Day indicates the beginning of hot summer and Koreans eat certain cuisine, such as stuffed chicken soup or fresh fruits, which is regarded to be good for health, especially in summer.. We decided to eat the watermelons from Kumamoto area, which is famous for its great taste in Japan. 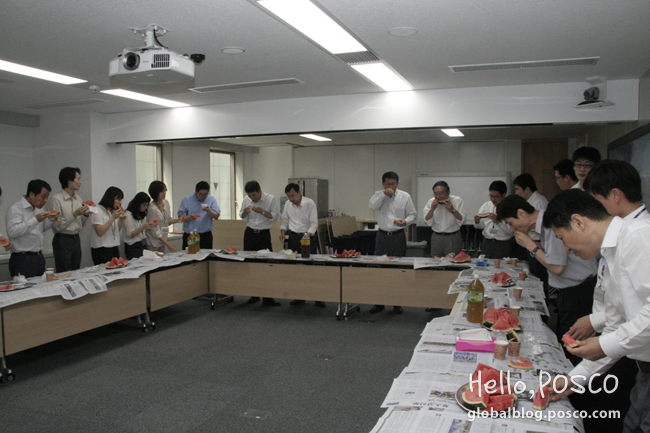 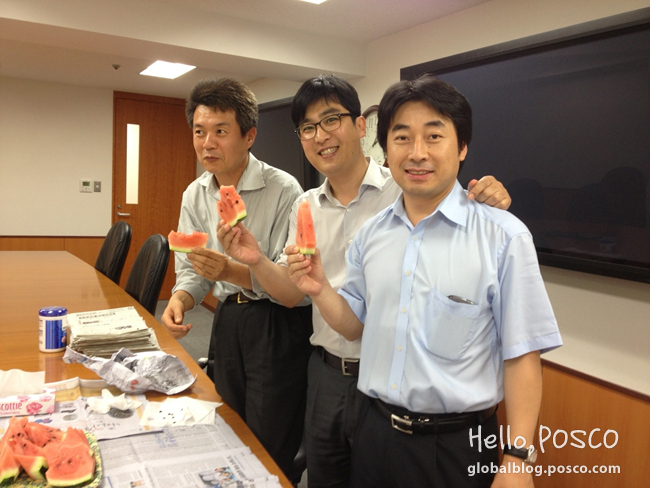 In Japan, we also have a similar day called ‘Doyo No Ushi No Hi,’ so it was not that unfamiliar concept for us. Also, it was quite amuzing to learn about the similar traditions we shared between Japan and Korea. All the members working at POSCO Japan joined the watermelon party and had a great, fun time together. 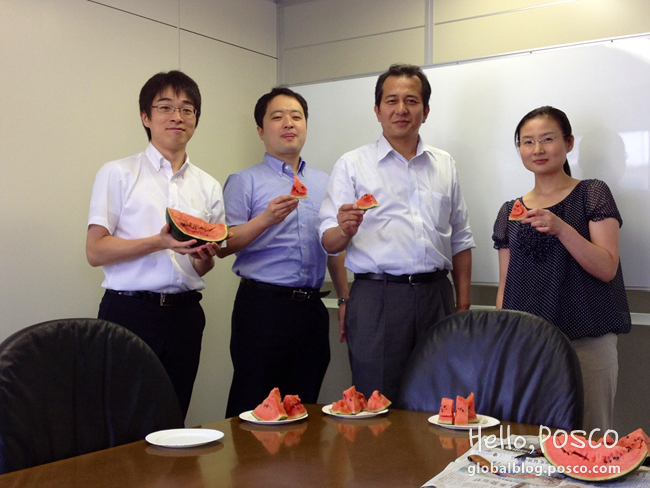 As we have both Japanese and Korean employees here in POSCO Japan, we get to experience each other’s culture and share thoughts. For me, it is a precious opportunity to learn more about Korea. POSCO Japan will continue having various activities for the local communities and will keep tightening the bonds amonst coworkers. And I will also update you with more special stories of POSCO Japan, here at Hello, POSCO.