This is our third, and last, interview with POSCO’s female executives. Vice President Ho-Young Liang is the first female President of Overseas Corporation at POSCO. In this interview with Hello, POSCO, Ms. Liang shares her experience, passion and vision as a female leader.

Thank you very much for joining us today. Can you tell us about how you started working at POSCO?

I’d say I grabbed the opportunity at the right moment. I was working for a translation agency which I’d established after coming back from Taiwan, where I gave lectures at the Central Police University. One day, I saw an advert from newspaper saying POSCO was hiring overseas regional experts. It certainly drew my attention. Before applying for it, I was slightly hesitative because I heard POSCO was a bit conservative towards female employees. It took me some time to consider but eventually, I handed in my resume and got accepted. 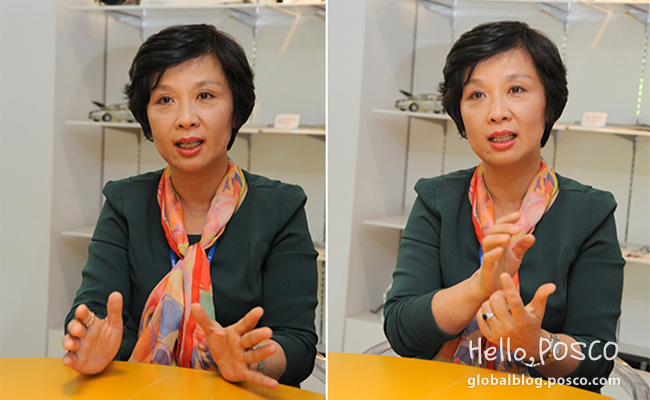 It was a big challenge. Until then, I only had experiences at schools. Then, I thought it could be quite fun to work in a company. My career at POSCO began in the overseas investment and business department. There was a great degree of investments in China by POSCO during the time. My Chinese skill came in very handy and I was also an interpreter for the management. Later, I moved my post to Sales for heated carbon and stainless steels.

When did you feel most challenged while working at POSCO?

Few years ago, I was reassigned to Beijing Office when my parents-in-law were very unwell and my husband was the only child to look after them. Although my husband told me to seize the opportunity, I just couldn’t leave them behind and move abroad. I even thought of quitting the job because of this. But POSCO showed me a tremendous consideration and allowed me to stay put in Seoul. I am still thankful for POSCO as the company listened to my voice and understood the personal issue.

Could you share your ‘Know-Hows’ on communicating with young colleagues?

I often visit my junior colleagues’ Facebook accounts. You can see their thoughts and worries through SNS which can be quite helpful to understand the difficulties they are facing. Speaking with my eldest daughter is another way of enhancing my communication skills with young employees. She is familiar with thoughts of the young generations like her so I try to have more conversations with my daughter whenever I can.

What would be your advantages as a female leader?

I reckon my strongest attribute comes when I take care of each individual’s feelings carefully. Notably in marketing, which is my field, it could be a great boost if you care for clients with great delicacy so you can lead them into a right direction.

How do you keep the balance between family and work?

I personally think husbands should be great supporters. My husband is same age as I am and we are just like friends. We talk about concerns and worries about our works together. There are certain things you cannot share with colleagues but you can always speak to your spouse about, well, virtually anything. 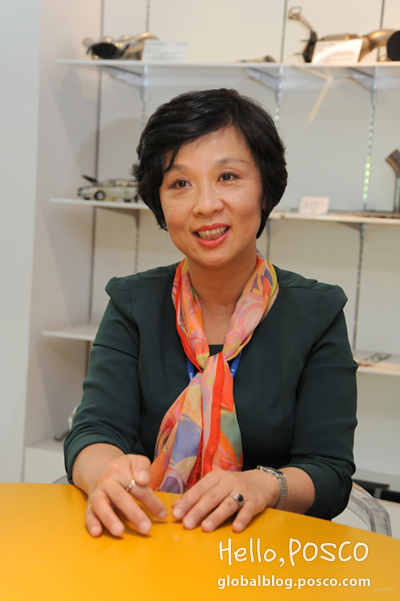 Also, husbands need to help their wives to keep up with housework such as raising children. The majority of female workers tend to feel sorry for not being able to spend much time with their kids. But I think it really depends on how you put it. When my kids were about three or four years old, I always explained to them about what I was doing for work because I thought it was essential to let them know their mom was playing an important role as a member of society, not just working to gain financial rewards. We need to make our children to be proud of us, not neglected. Also, I try to emphasize their roles within a family for studying hard and being independent. My children have been behaving really well to me and I’m grateful for that.

Are there any advices that you would like to give to your female junior employees?

I’ve seen many women taking time-offs or quitting their jobs after getting married. I feel sorry when the female talents are forced to cease their careers because of the first 1 or 2 years of childcare after giving birth. When my children were babies, I was living with my parents-in-law and they brought the children up with so much love. Some say it’s hard to live with their parents-in-law but I think there are so many things you can learn and thankfully receive from them. We only need to talk and narrow down our differences and things will turn out to be fine.

What is your grateful moment as a member of POSCO?

I appreciate POSCO for trusting me and promoting my position to be the first female team leader, group leader and executive. The President of Overseas Corporation carries a tremendous responsibility of managing a corporate and I’m glad that the company offered me the role.

You’ve worked in marketing field for quite a long period. Do you have any special business skills to tip us off?

I focused on developing our small and medium-sized enterprise partners’ potentialities so they could overcome the market’s fierce competition. Also I put a lot of effort into understanding clients. Such efforts have resulted in improvements of the relationship between POSCO and the partners. For instance, there was a Japanese steel pipe manufacturer, which wasn’t participating in any meaningful business with us. Now, the firm has become one of our royal customers purchasing 90 percent of their purchases from POSCO. I managed to accomplish the success by researching their needs whenever I visited the firm. After a while, I realized that Japanese companies had limited knowledge of foreign trends and market condition as they were generally targeting domestic market. I provided them with information of export market because I was familiar with the area as a leader of the export team. The company could act faster than its competitors and generated profits with the resources I gave them and it naturally led to the firm’s trust in me. 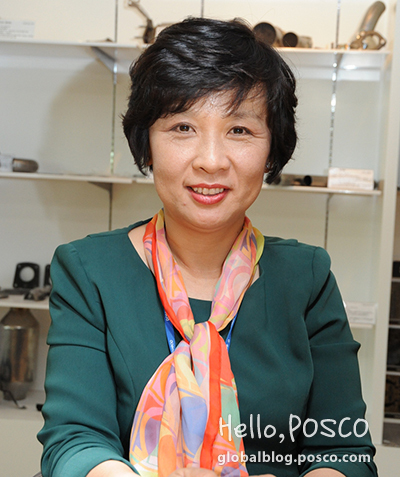 Such achievement was feasible because I tried to assist them by developing their potentiality so they could overcome the market’s fierce competition. If I had only offered cheaper price or any other simplistic solutions, the success would not have been possible.

What are the essential attributes and attitudes you would suggest your fellow members to have?

POSCO is a manufacturing company so a firm discipline should be applied to all. Furthermore, our staff ought to possess a sense of ownership towards the company. You need to do your best, even if certain decisions could give you hard times. At the end of the day, you will realize it was worthwhile doing and satisfactory results will soon follow. This is a view I would like to put forward to, not only POSCO but also, our affiliates.

As for the last question, how do you see yourself after 5 or 10 years from now on?

If there’s an opportunity, I’d like to work as a marketing executive to develop myself by managing a broader region. Struggling markets like Japan at the moment would be the place I’d want to challenge. For a long term aim, my dream is to challenge myself as far as I can and keep advancing forward.

After the interview with Vice President Liang, POSCO could realize how important it is to love our work and devote ourselves to the company. This concludes our series of interviews with POSCO’s three female executives. POSCO wish their journey ahead would be leading them towards glorious success, setting the fine examples for POSCO and other female talents. As always, POSCO’s effort to cultivate female leadership marches on.