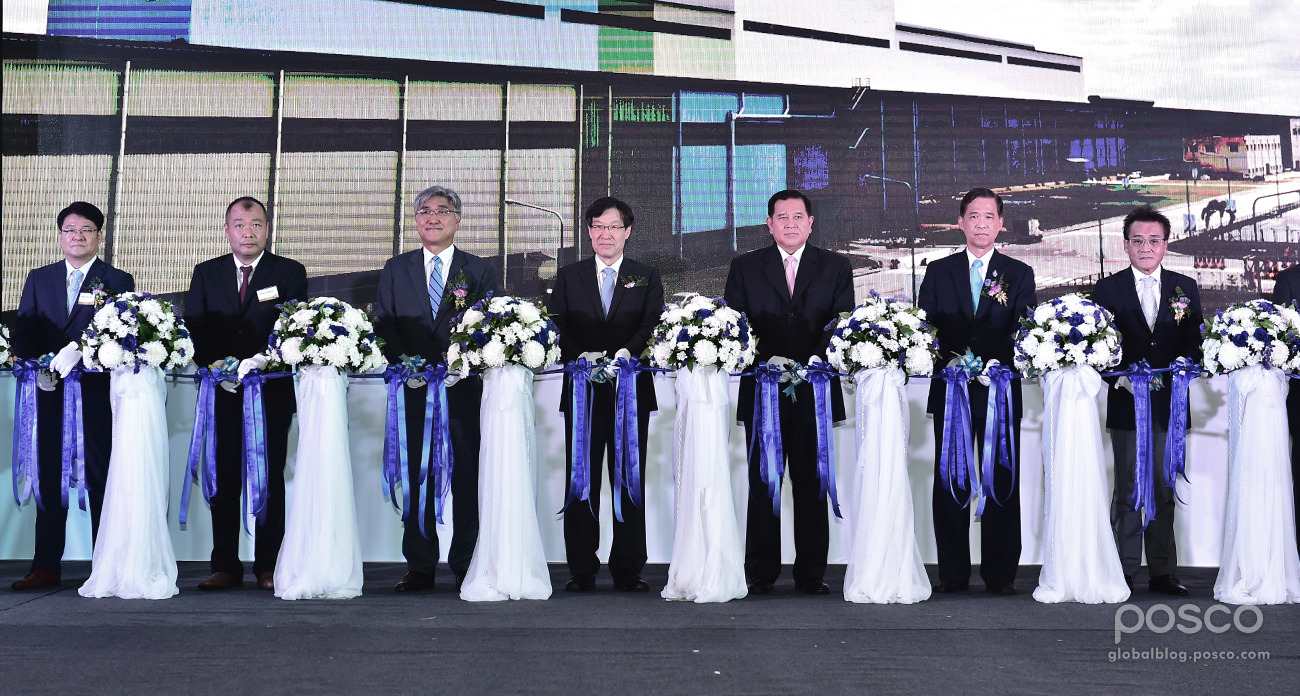 Members of the Thailand government and executives from parent companies, including POSCO CEO Ohjoon Kwon (featured in the middle), participated in the ribbon cutting ceremony for the completion of POSCO’s Thailand CGL on August 31 in Rayong Province, Thailand.

“Thailand is the hub of the AEC (ASEAN Economic Community) that was launched last year, and is positioning itself as the automotive production base in Southeast Asia as well as the center of the home appliances industry,” claimed Kwon in the welcoming speech that day. “With today’s completion of Thailand CGL, POSCO will be devoted to becoming a total solutions partner that provides differentiated products and customized solutions in Thailand, while also creating value and growing with our clients.” 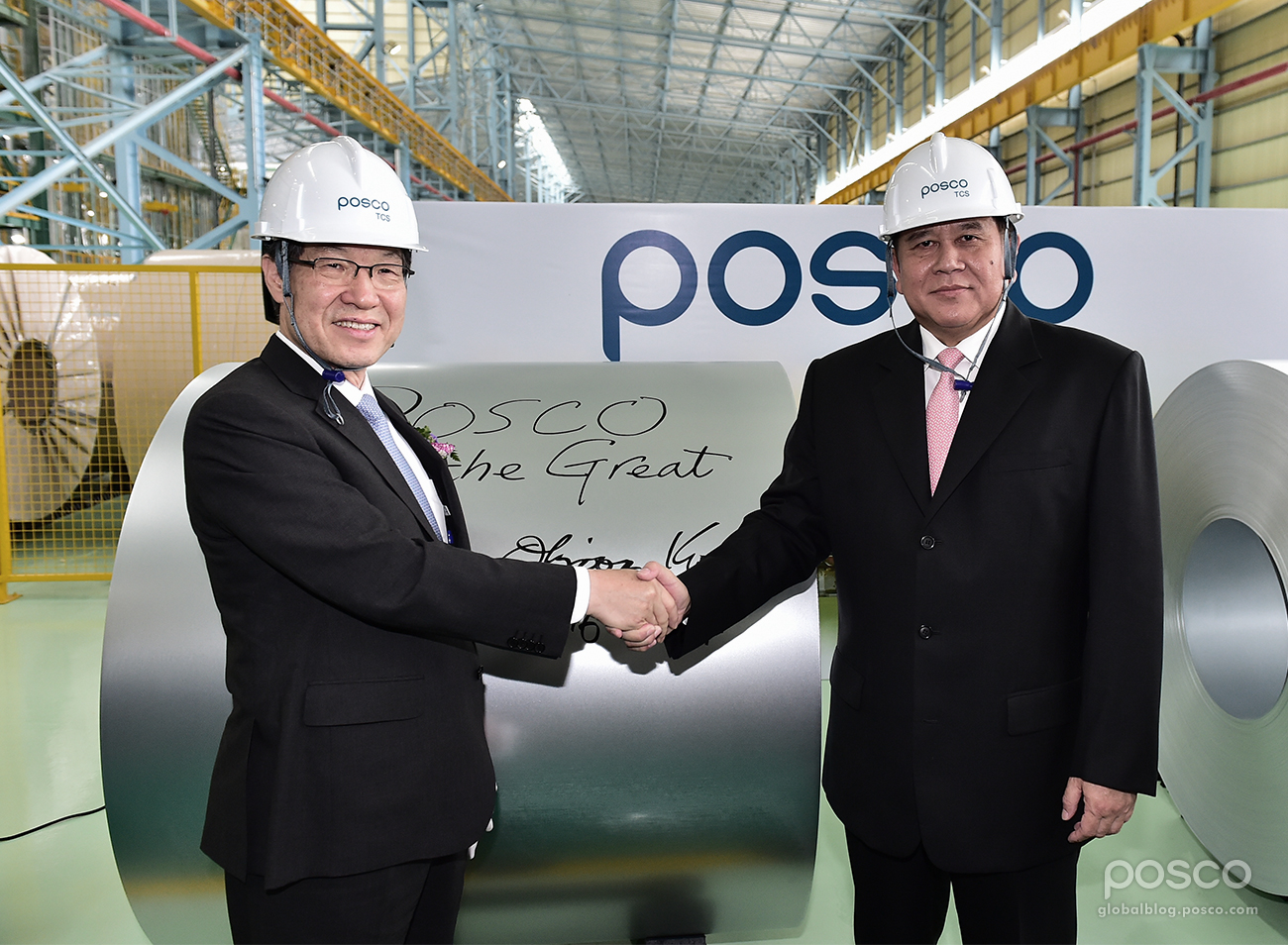 The completed CGL is a premium automotive steel sheet production base that began construction in September 2014 with a total investment of $300 million. POSCO plans to expand into the premium automotive steel sheet market in Thailand by supplying the products manufactured at the new operation to global automakers and parts manufacturers such as Toyota, Nissan and Ford stationed within the country. The company also plans on providing the processing services of POSCO-TBPC, which is a processing center near Bangkok.

In particular, with the recent zero-tariff measures taken among AEC member states and the Thai government’s eco-friendly car industry policy, the Thai market has high growth potential that will expand to an annual production capacity of 2.8 million by 2020.

Automakers and parts manufacturers in Japan have been advancing steadily in this region since the 1960s. In 2013, to supply materials to Japanese companies on site, steelmakers such as JFE and NSSMC completed automotive steel sheet plants with capacities of 400,000 tons and 360,000 tons, respectively.

Despite the increasing production scale of automotive steel sheets in Thailand, the supply still falls short of demand, which inevitably results in greater dependence on imports from overseas markets. Thus, POSCO plans to build stronger strategic partnerships by smoothly supplying materials to global automakers and parts manufacturers (including Japanese companies) in Thailand, and to expand sales of premium plating materials in the automotive steel sheet market. Accordingly, POSCO reviewed the project to establish a local production subsidiary in 2011, launched the CGL project in 2014 and finally completed the construction on August 31, 2016. 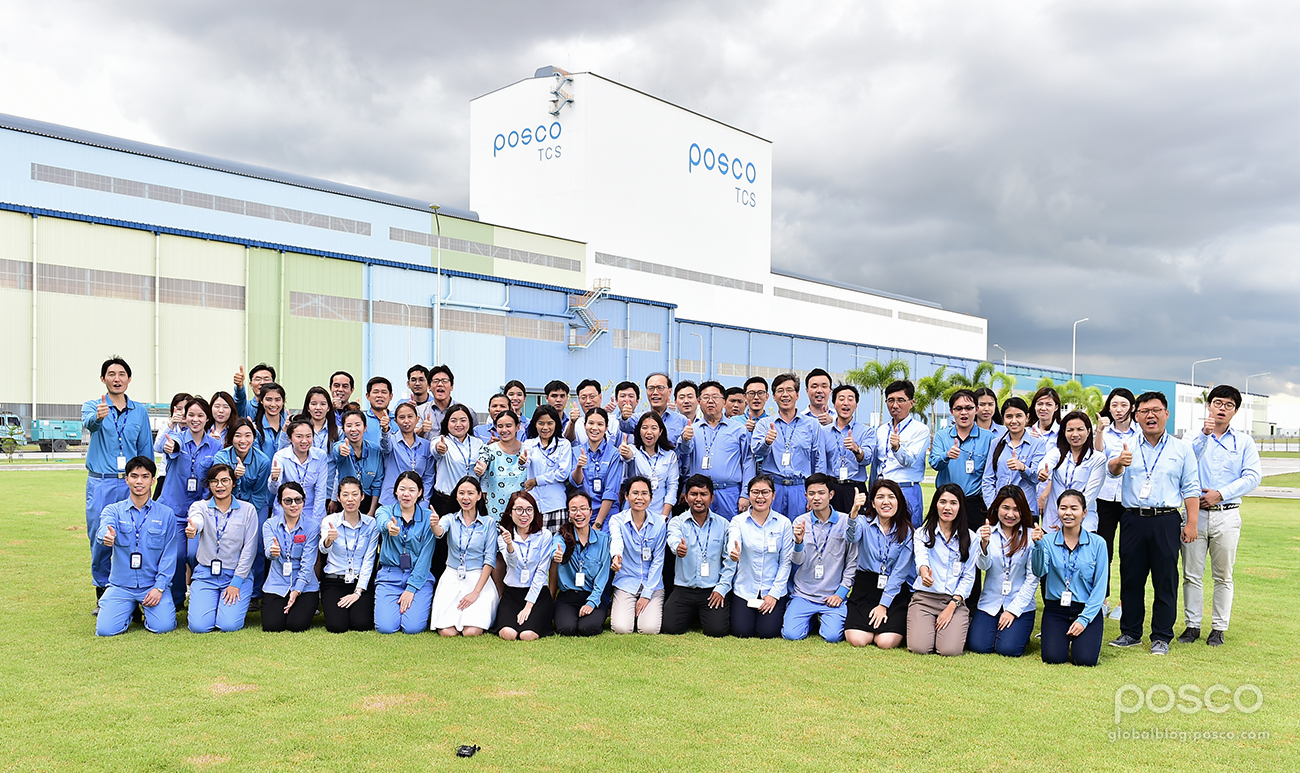 POSCO-TCS employees will contribute to the reinvention of POSCO the Great by securing a leading competitive edge in the automotive steel sheet market in Southeast Asia.

By completing the plant, POSCO has established an optimized solution marketing system in Southeast Asia, covering departments from production to processing, sales and technical support with the local processing subsidiary and the production facility in Vietnam. POSCO will be able to strengthen its position in competition with global steelmakers by expanding the production capacity for automotive steel sheets in Thailand, in addition to its production output from India and China.

With the completion of Thailand CGL, POSCO’s production capacity for automotive steel sheets overseas has increased to 2.25 million tons a year. POSCO also plans to establish and extend the CGL operation in Gwangyang and China, operating seven lines in Korea and six lines overseas, thereby producing more than 9 million tons this year. After 2018, the company will complete a 10-million-ton sales system to secure its place as the world’s best supplier of automotive steel sheets.