POSCO Holdings has started construction of a lithium commercialization plant in Argentina. POSCO Group is the first to produce lithium hydroxide for batteries in Argentina throughout the entire process from the acquisition of mining rights to exploration, construction and operation of a production plant.

POSCO Group CEO Jeong-woo Choi attended the groundbreaking ceremony for the brine lithium plant based on the Hombre Muerto Salt Lake, located in the 4,000-meter-high Salta Province in Argentina, which was held on March 23, along with Byeong-og Yoo, Head of the Green Materials & Energy Business Team of POSCO Holdings, Kwang-bok Kim, President of POSCO Argentina, Gustavo Saenz, governor of Salta, Raul Jalil, governor of Catamarca, and Myung-soo Jang, South Korean ambassador to Argentina.

CEO Choi’s participation in the groundbreaking ceremony is his first global move since the launch of the holding company of POSCO Group on March 2 and the first on-site visit for the lithium business, one of POSCO Group’s seven major core businesses.

Construction of the brine lithium plant, which began on the same day, is to be completed in the first half of 2024, with annual production of 25,000 tons of lithium hydroxide. The total investment cost is about 830 million dollars (about KRW 0.95 trillion) including infrastructure investment and operating funds. Operation of the lithium plant and financing will be 100% carried out by POSCO Argentina, a subsidiary of POSCO Holdings. POSCO Group plans to increase mass production to 50,000 tons from the end of 2024 with an additional investment in annual production of 25,000 tons in the second phase of the lithium project, which will begin construction on the same day. Production is expected to be increased by stages to a maximum of 100,000 tons by 2028.

CEO Choi said in a commemorative speech, “Today is a very historic day for Argentina, Korea and POSCO Group, because the lithium business that POSCO Group has been preparing for several years at last takes its great first step today. This brine lithium project will become the foundation of the secondary battery material business of POSCO Group.”

He added, “By stably securing a large volume of lithium, a raw material for cathode materials, the entire value chain of POSCO Group’s secondary battery material business will be enhanced.”

Gustavo Saenz, governor of Salta, and Raul Jalil, governor of Catamarca said, “Congratulations on POSCO Group’s first step in the lithium business in Argentina. We are glad that we can be together with POSCO Group, the only company in the world that has the capability of processing secondary battery material from the raw material lithium to cathode/anode materials. We appreciate the creation of regional employment. We will actively keep supporting the lithium business of POSCO Group.”

The 25,000 tons of lithium hydroxide produced by POSCO Group can be used for about 600,000 electric vehicles. If the production amount is increased to 100,000 tons, it can be used for about 2.4 million electric vehicles. With the recent surge in global demand for electric vehicles, battery companies around the world are striving to secure lithium, and POSCO Group’s preemptive acquisition of a large amount of lithium has strengthened POSCO Chemical’s competitiveness in the anode material business. Since anode materials are mainly lithium, nickel, and manganese, securing stable supplies of materials will soon lead to competitiveness in the anode material business.

POSCO Group preemptively acquired the salt lake of Argentina in 2018 in response to the prospect of a global lithium supply shortage due to the full-fledged electric vehicle era, and in 2020 confirmed with Montgomery & Associates, a global U.S. lithium consulting company, that its lithium reserves were 13.5 million tons based on 2.2 million tons estimated at the time of acquisition. Considering the mining potential and yield, it is expected to produce at least 2.8 million tons of lithium. In addition, the lithium concentration of the salt lake is the highest among salt lakes in Argentina at 921 mg/L and the concentration of impurities such as magnesium is relatively low, so it is evaluated to have the best productivity in the world.

Also, by applying the lithium extraction technology POSCO Group has developed independently, the production time was dramatically reduced and yield was improved, leading to global competitiveness in productivity. The recent surge in lithium prices has led to a five-fold increase (market price per ton of lithium) compared to the acquisition time, and a cumulative operating profit of tens of trillions of won is expected to be achieved considering the 50% operating profit ratio of the lithium mining industry.

POSCO Group plans to become one of the top three global lithium production companies by 2030 based on salt, ore and waste battery recycling at the group level, including POSCO Argentina, POSCO Lithium Solution, and POSCO HY Clean Metal, with POSCO Holdings at the center. Also, because a solid electrolyte production line began to be established on March 14 through a joint venture between POSCO JK Solid Solution and Jeong Kwan, a company that has production technology for solid electrolyte, a solid-state battery material, POSCO Group is expanding its secondary battery material business to the area of next-generation solid-state batteries. 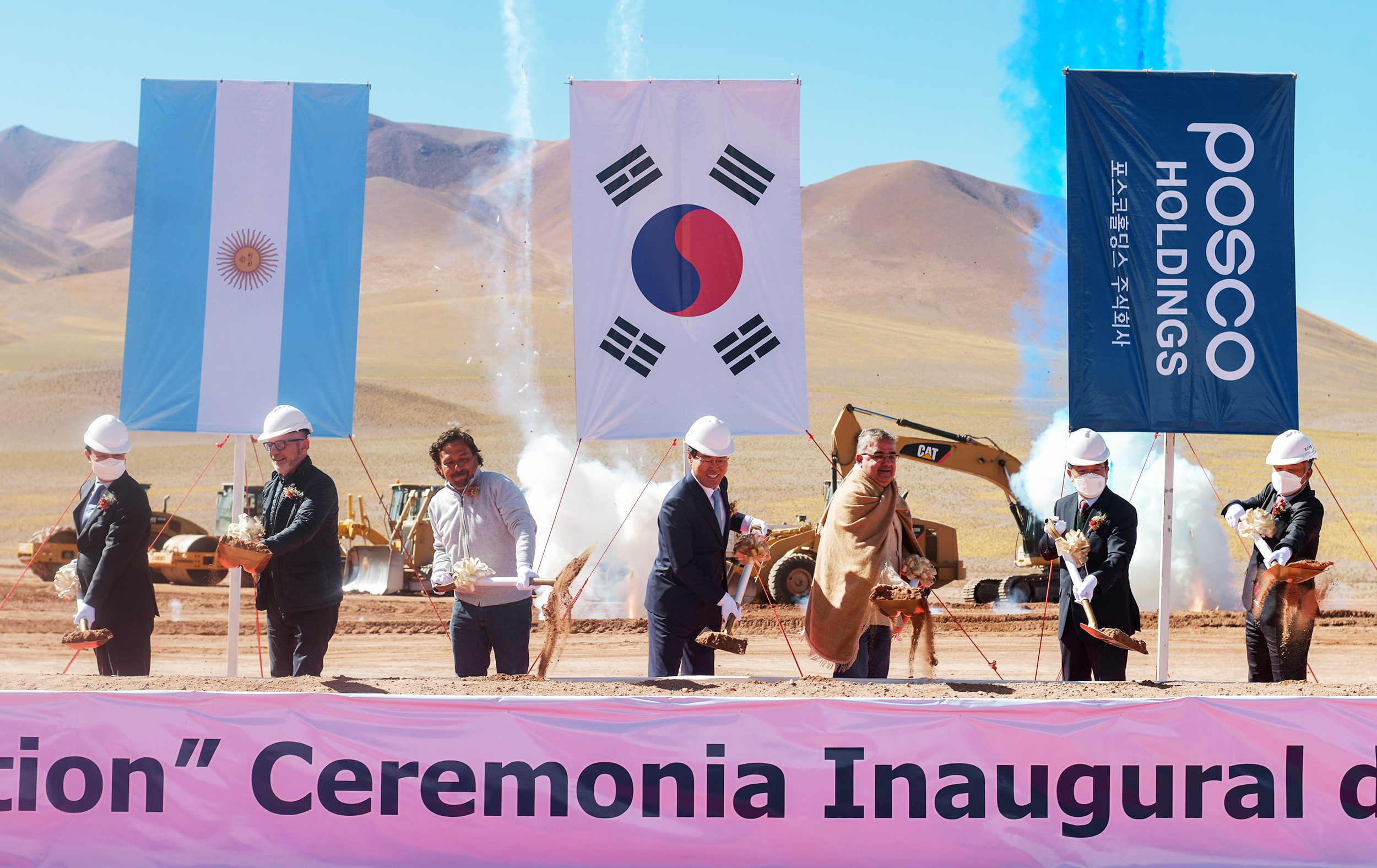 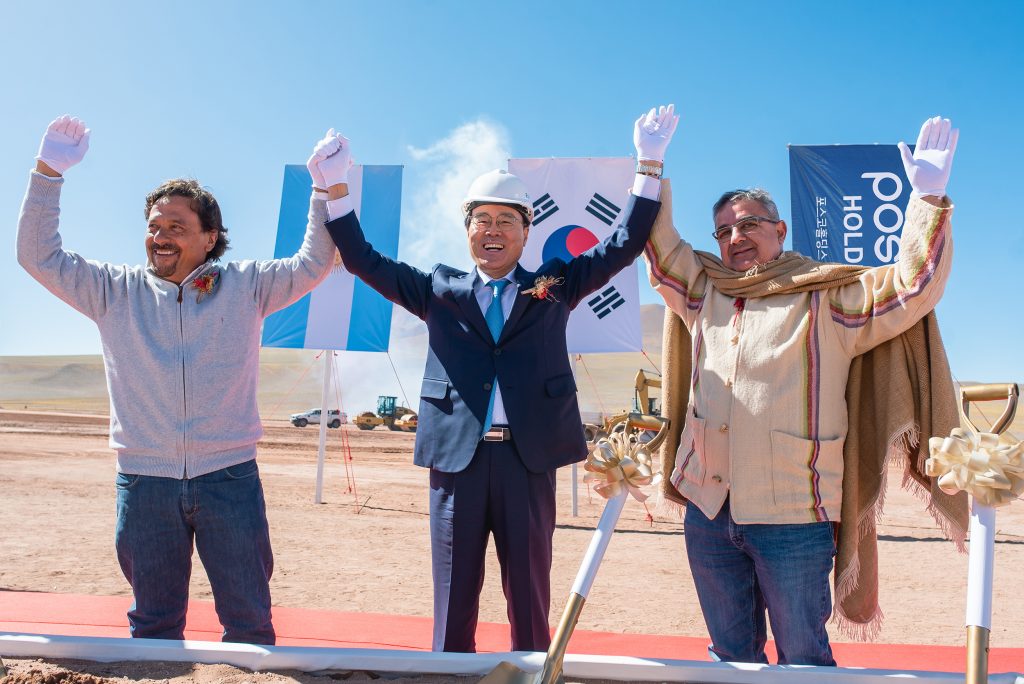