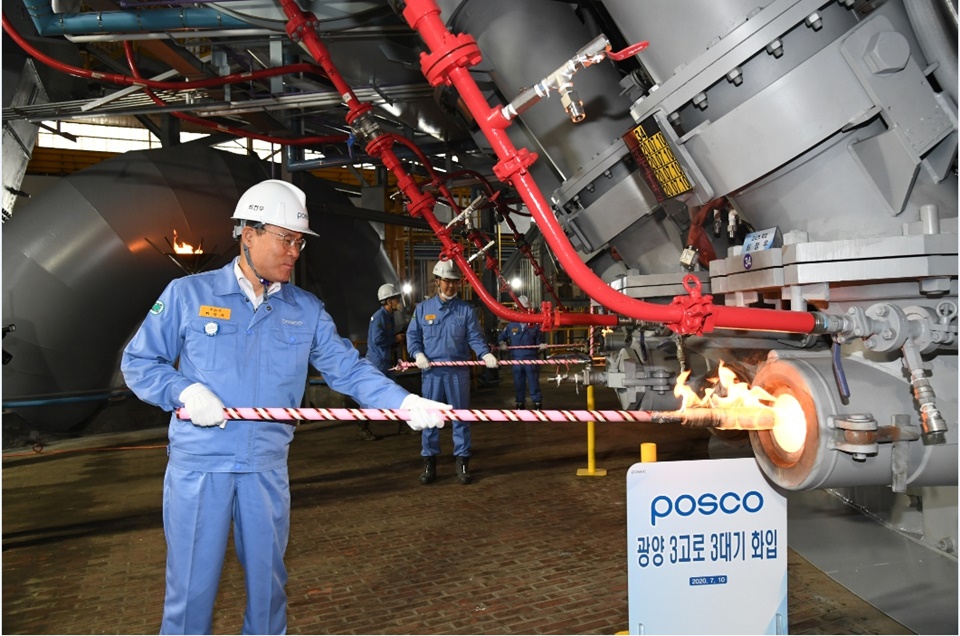 ▲ POSCO CEO Jeong-Woo Choi lighting POSCO Gwangyang No.3 Blast Furnace, which was revamped into a gigantic, smart, and sustainable one

POSCO Gwangyang No.3 Blast Furnace has completed transformation into a smart and sustainable blast furnace.

On July 10, POSCO (CEO Jeong-Woo Choi) held a Blow-In ceremony at the No.3 Blast Furnace site of Gwangyang Works to commence the third operation of the furnace on completing its second refurbishment*.
* Refurbishment: A maintenance operation conducted after extinguishing the fire inside a blast furnace to replace the internal firebricks and renew some parts of the facility.

Through the second refurbishment, Gwangyang No.3 Blast Furnace has been transformed into a super-gigantic, smart, and also sustainable furnace. The maintenance project has boosted its internal capacity to 5,500m³ from 4,600m³, which has, in turn, improved productivity by 25%, amounting to 4.6 million tons per year. Another significant change is that it has prolonged facility lifespan, reduced carbon emissions, and cut costs. By introducing smart technology with AI, POSCO has taken the stability of steelworks operation and quality to the next level. It also has strengthened sustainability of the Blast Furnace’s with investment in gas-cleaning facilities and water resource facilities.

The refurbishment of Gwangyang No.3 Blast Furnace lasted for one year and eight months with a total investment of 400 billion KRW and 230,000 workers yearly. Despite the COVID-19 issue, the project proceeded as planned without a single case of infection. POSCO’s business partners, who were equipped with additional employees and facilities in line with the Blow-In of the renovated furnace, are also in full swing and revitalize the local economy.

POSCO has already secured the minimum order required to operate the Gwangyang No.3 Blast Furnace and plans to make every effort to resume operation to its ordinary level promptly so that client companies would keep on their business. The steel demand slump that the COVID-19 pandemic has imposed is yet to be recovered, and steel prices are still low. However, POSCO plans to minimize costs and secure profitability by winning maximum sales orders.

At the Blow-In ceremony, POSCO CEO Jeong-Woo Choi said, “Gwangyang No.3 Blast Furnace produced 97 million tons of molten iron for 29 years and three months, since its first operation in December 1990. It has served as a foundation for POSCO’s growth, as well as for the advancement of demand industry of Korea. A blast furnace is a facility that produces steel, the rice of the industry, and is a symbol of harmony, cooperation, and challenge. I sincerely hope the Blow-In today will serve as a momentum to overcome the economic crisis caused by COVID-19, marking the ‘restart’ of POSCO and South Korea’s manufacturing industry.”