MOU between POSCO Holdings, POSCO International, POSCO E&C, and PETROS on the 12th

POSCO Holdings signed a memorandum of understanding with POSCO International, POSCO E&C, and PETROS on a carbon capture and storage project using depleted oil and gas fields at the Sarawak State Government Complex in Malaysia on December 12th, 2022. PETROS is an oil and gas company owned by the state of Sarawak, Malaysia.

Under the memorandum of understanding, the two parties decided to conduct a feasibility analysis on the project to capture, transport, and store the CO2, being discharged from the operation of POSCO steelworks and from the production of blue hydrogen, at depleted, offshore oil and gas fields off the state of Sarawak.

After signing the agreement, POSCO Group and PETROS plan to form a working group to discuss in detail everything from CO2 capture in Korea to CO2 transportation to Sarawak, Malaysia, CCS infrastructure facility construction, and CO2 injection and storage.

Ju-ik Cho, Head of POSCO Holdings Hydrogen Business said, “POSCO International has experience in exploring and operating overseas mines and POSCO E&C has also completed an in-depth study on CO2 facilities. We will accelerate carbon neutrality through this cooperation. As close cooperation between the government and companies is important for the CCS project, we expect active support from the state government for cooperation with PETROS, an oil and gas company under the Sarawak state government.”

Anyi Ngau, Head of PETROS’ Sarawak Resource Management Division said, “The CCS project is a key driving force in Sarawak’s achievement of carbon neutrality by 2050 and has the potential to promote a world-class CCS project with the support of the state government.

Meanwhile, POSCO Holdings signed an agreement with Samsung Engineering, Lotte Chemical, Malaysia’s SEDC Energy, and Sarawak Energy Berhad, to promote the ‘Sarawak H2biscus Clean Hydrogen Project’ in September. The project is currently undergoing a feasibility study and aims to produce commercial hydrogen by the end of 2027. 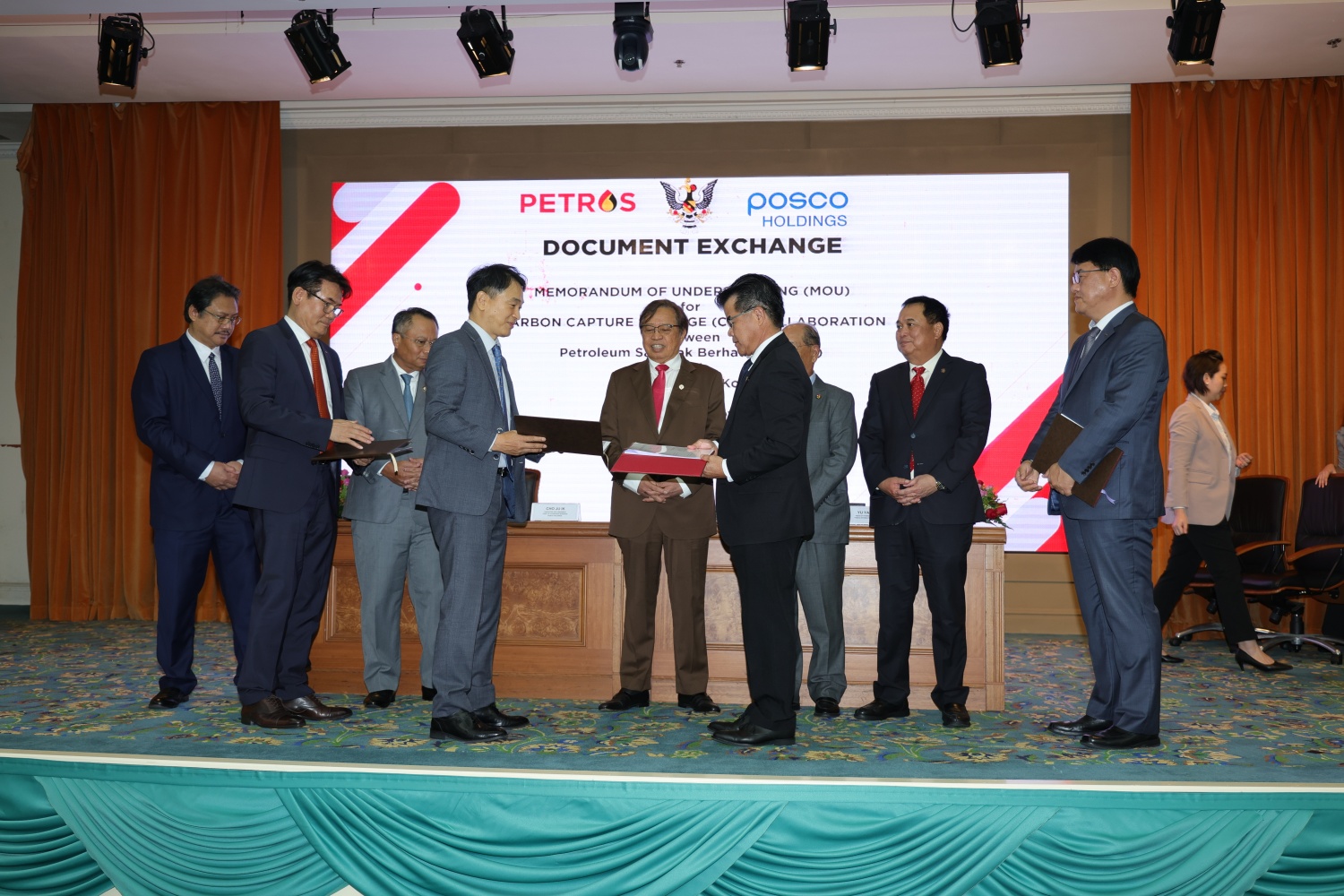 ▲ POSCO Group signed an MOU on CCS (carbon capture and storage) project with PETROS at the Sarawak State Government Complex in Malaysia on the 12th and Ju-ik Cho, head of POSCO Hydrogen business division (fourth from the left), and Anyi Ngau, head of PETROS’ Sarawak Resource Management Division (sixth from the left), are exchanging agreements.