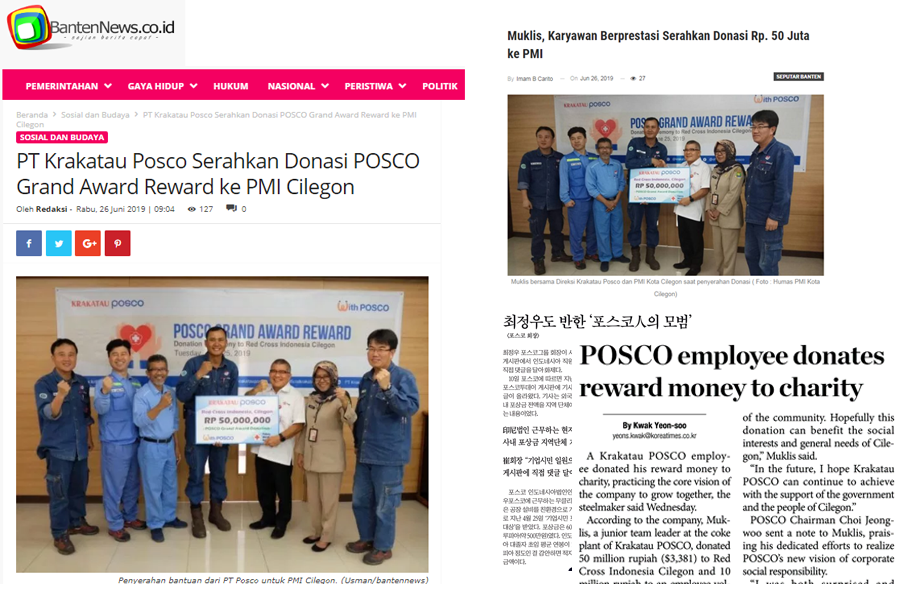 ▲ A PT Krakatau POSCO employee recently made headlines for donating his reward money from the company to local charities. Muklis, a junior team leader at the coke plant of PT Krakatau POSCO is the winner of the POSCO Grand Award for Corporate Citizenship of 2019.

The Award was established in 1992 and underwent a few name changes over the years. From this year, the award is reestablished as the ‘POSCO Grand Award for Corporate Citizenship’ to reflect POSCO’s new management principle, corporate citizenship. The annual award selects 10 outstanding employees from a total of 60,000 POSCO Group workers worldwide whose work performance and model behavior reflect the spirit of corporate citizenship. 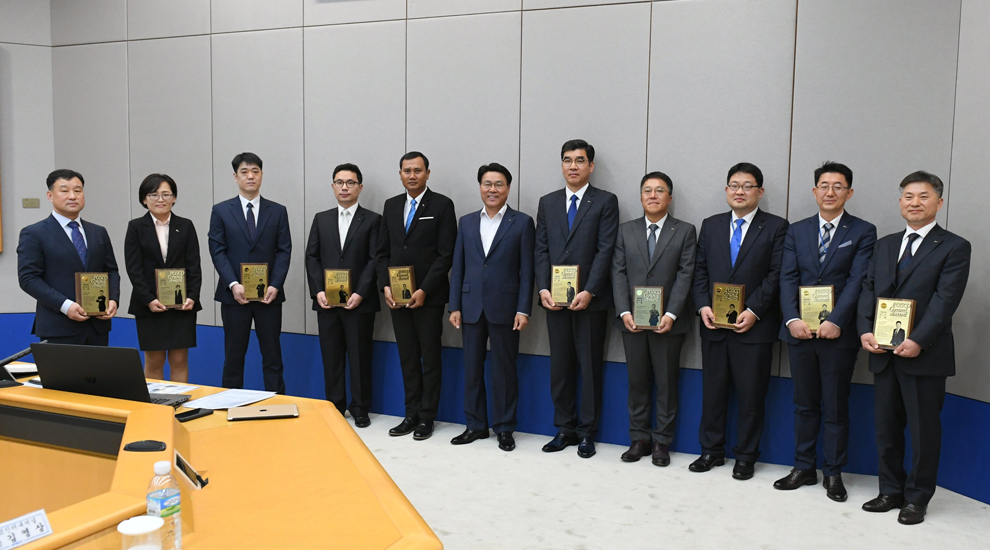 ▲ The winners of POSCO Grand Award for Corporate Citizenship of 2019 are taking photos with the POSCO CEO Jeong-Woo Choi (sixth from the right). Standing CEO Choi’s right is Mr. Muklis, the junior leader of the Ironmaking Department at PT Krakatau POSCO.

Muklis, a junior leader at PT Krakatau POSCO in Indonesia received the POSCO Grand Award for Corporate Citizenship on April 25.

Coke is used as a fuel in melting iron ore in a blast furnace and is produced in coke oven by baking coal until it becomes carbon by burning off impurities without burning up the coal itself. What Mr. Muklis did was to establish an eco-friendly coke oven helping improve the overall quality of life in the local communities. 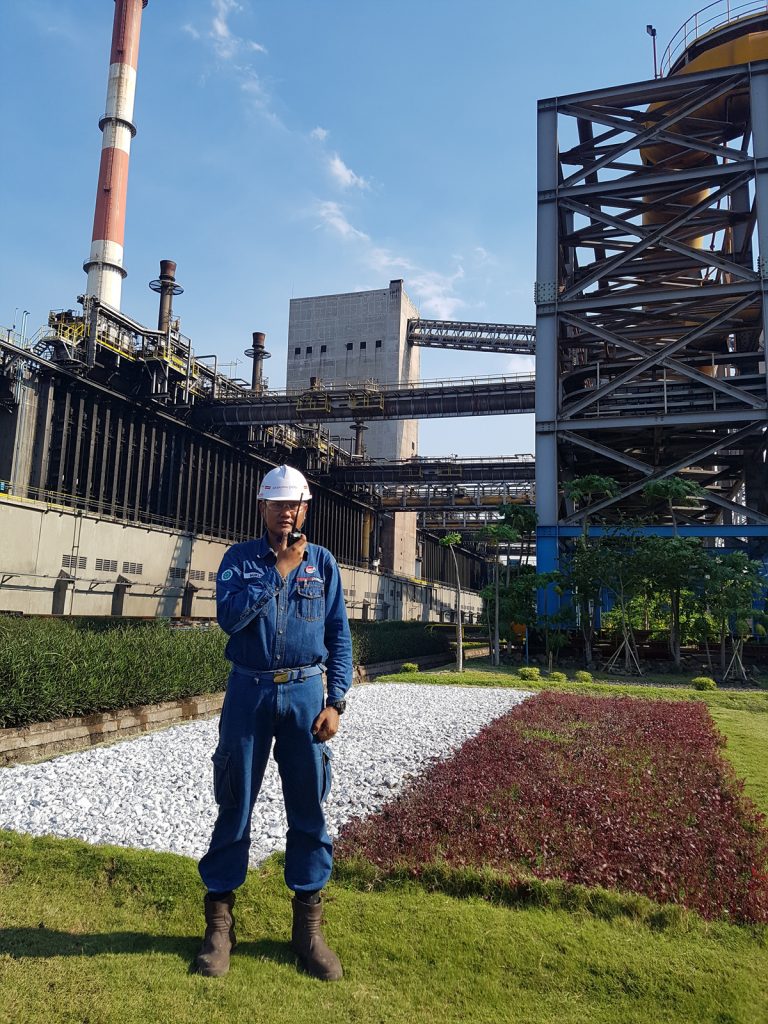 “The coke ovens tend to get bad reputations because it bakes coal. However, since the beginning of the operation, both Korean consultants and Indonesian staff collaborated to minimize the unexpected situation in the plant. Their dedication helped improve both the quality of the coke and the furnace operation. Furthermore, the facilities also improved the environment in the vicinity for the past two years – now the oven is so clean it’s called the garden of the steelworks. With every achievement, I feel incredibly grateful and proud of all the work our team is doing. I feel more confident than ever.”

l The Seed of Sharing to Spread to the Whole Country

*The average starting salary of university graduates in Indonesia is around 100 million IDR (7,160 USD). 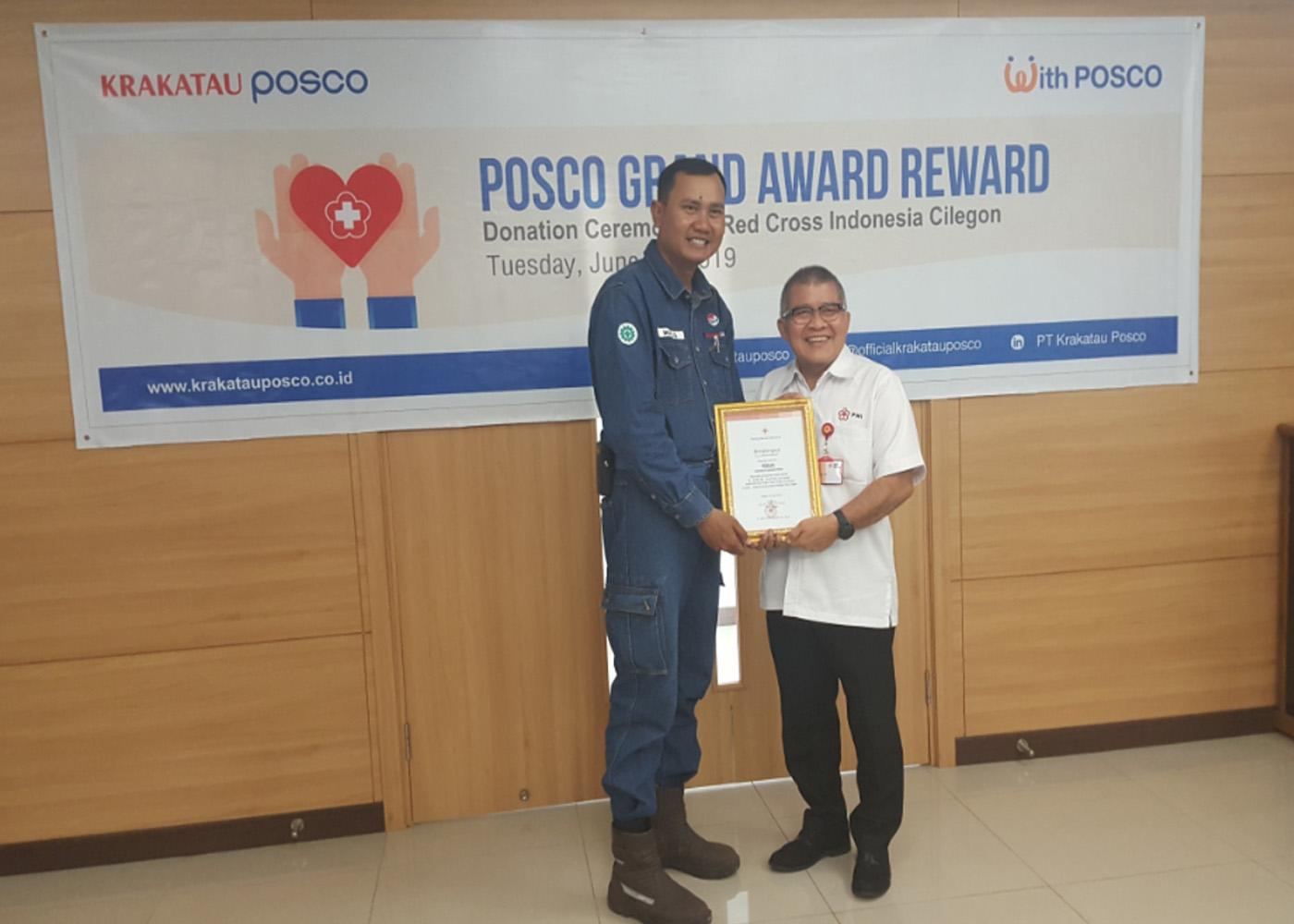 ▲ On June 25, Mr. Muklis delivers the donation to the Red Cross Cilegon.

“I couldn’t have done this alone. All the employees at the PT Krakatau POSCO contributed. If our company could help improve the lives and opportunities for the community, in turn, our local talents can grow up to contribute to the company, the steel industry, and entire Indonesia. I wanted the reward money to be put to good use.”

“It’s an incredible honor to receive the POSCO Grand Award for Corporate Citizenship. I would like to thank the CEO Jeong-Woo Choi – I want to tell my little boy all about it when he grows up.”

l Experiencing the Joy of Sharing at Pohang Steelworks

Mr. Muklis joined the PT Krakatau POSCO in 2012. In 2016, he worked as an exchange engineer at Pohang Steelworks for six months.

“I was impressed by the industrious work ethic in Korea and POSCO’s corporate culture. Everyone was so driven to tackle and solve problems together. The employees were incredibly loyal and had a sense of ownership for their work. After work, I would also go out for dinner and baseball games with my colleagues who also helped me with my Korean.

He also recalled being inspired by the employees’ regular volunteer work during the weekend. 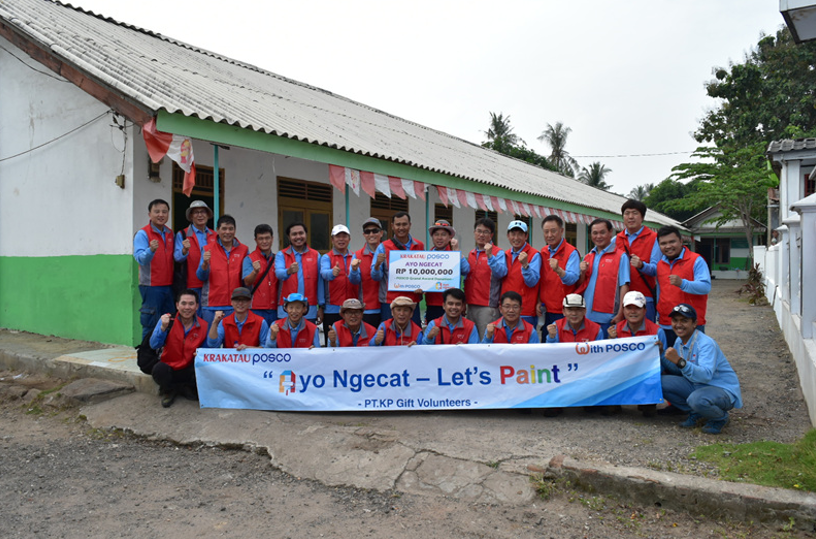 “One of the fondest memories were made at those weekend volunteer programs. The employees at Pohang Steelworks, as well as the family members, helped the local seniors –with haircuts and dying, etc. The experience inspired me to make donations to our local communities in Indonesia.”

It was while he was working at the Pohang Steelworks that his first child was born – a boy. Because of his fond memories from Korea, he named his son Daehan. 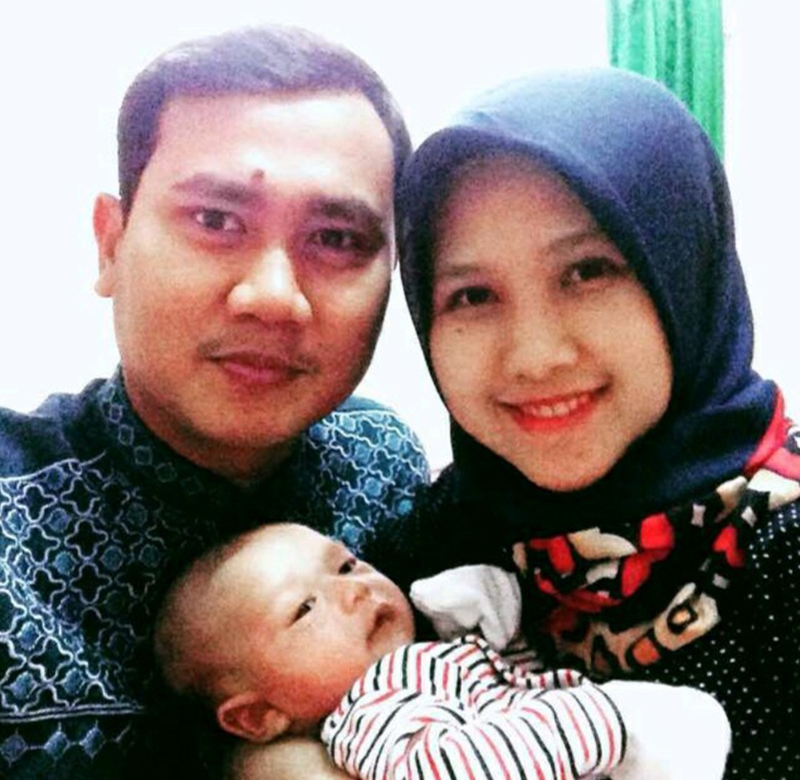 “I named him Daehan because I wanted the spirit of POSCO’s founding principles to be carried down to our family. POSCO is one of the top companies in Daehan Minguk. If I have another son, I would like to name him ‘Minguk.’

For Mr. Muklis, PT Krakatau POSCO is more than just a job. He emphasizes the POSCO Grand Award for Corporate Citizenship was a team effort, not his individual achievement. 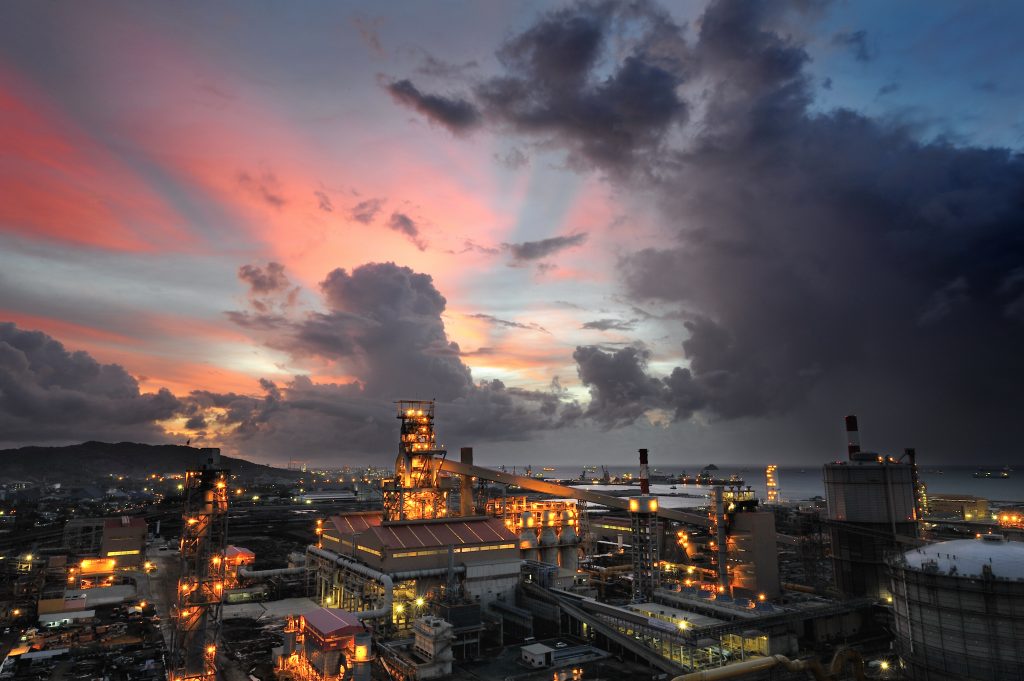 “Everyone at PT Krakatau POSCO is incredibly proud to be part of the company – not only is POSCO the world’s top steelmaker, but PT Krakatau POSCO is its first steelworks outside of Korea – and the first integrated steel mill in entire Southeast Asia. I’m well aware of how all POSCO employees came together to build the Pohang Steelworks in the middle of wasteland – and now it’s the most competitive steel company in the world. We have a very supportive community here at PT Krakatau POSCO, which is how we overcame initial challenges and kept progressing.”

“I have no doubt the PT Krakatau POSCO is playing a significant role in the Indonesian economy. All our employees are moving towards the big vision – to become the biggest steelworks in Southeast Asia.” 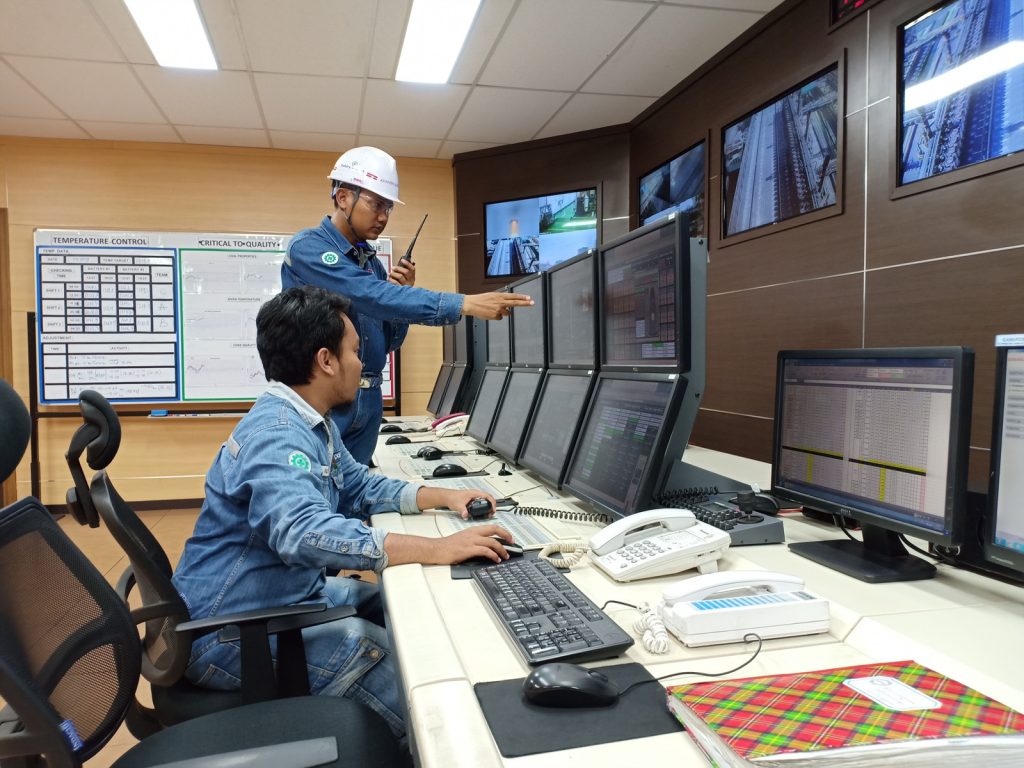 “PT Krakatau POSCO’s success feels like a miracle. POSCO’s expertise and advanced technology, as well as the employees’ dedication and maximum initiatives, made all this possible. Just like the POSCO leader who’s mentoring the PT Krakatau POSCO, I would like to become the plant manager of the coke plant one day. I would like to witness the historical moment when we achieve 10 million-ton production.” 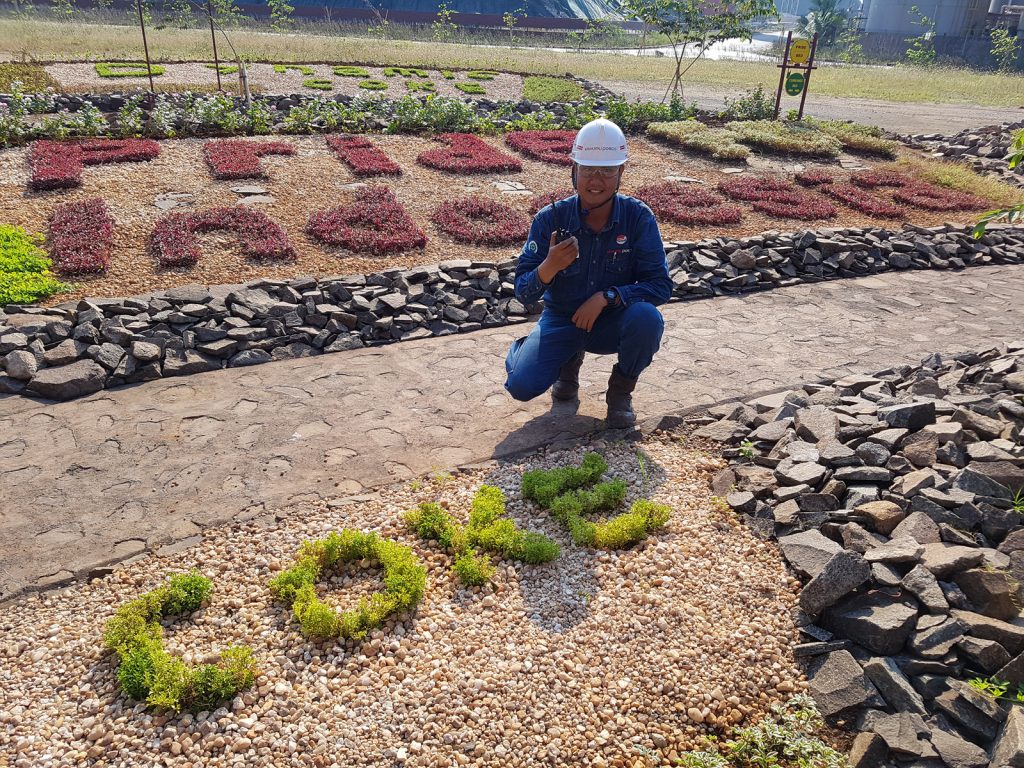 ▲ ‘Pride of Indonesia’ – Mr. Muklis dreams of the day when the company achieves 10 million-ton steel production.

Mr. Muklis says not only must he develop his skills to become a good manager, but he’s also realizing the importance of establishing a unique company culture through active communications with the employees.