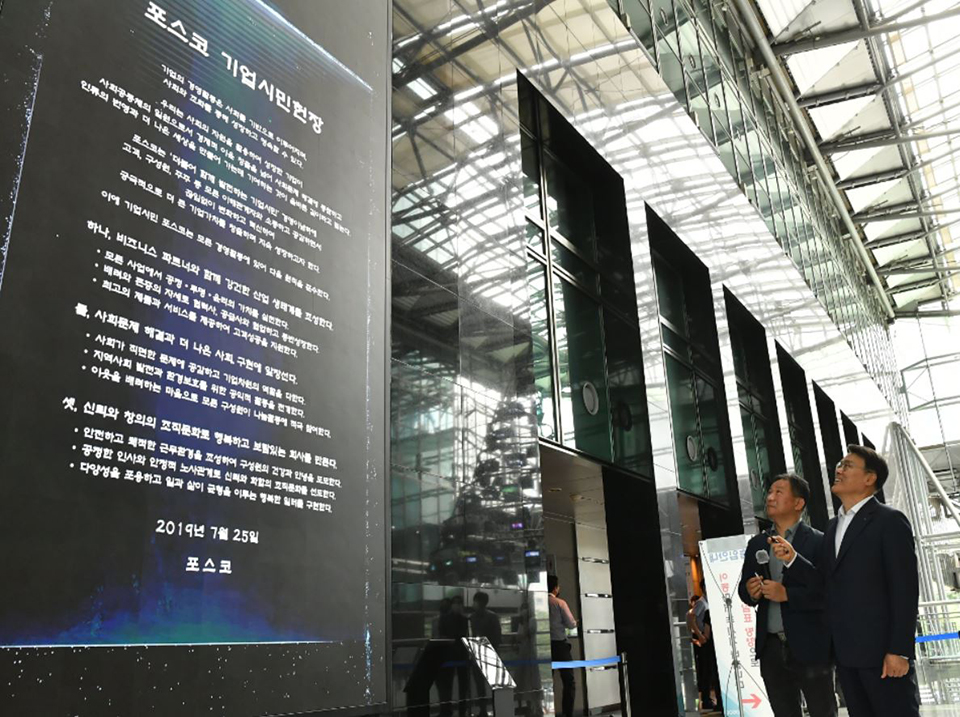 The meeting was attended not only by domestic business sites in Seoul, Pohang, and Gwangyang but also by overseas subsidiaries worldwide. Around 100 attendees, including POSCO executives, Representative Directors of group companies, Heads of overseas offices, and Heads of the Corporate Citizenship Business Unit, were at the meeting. They discussed the achievements as of now — such as the six major Corporate Citizenship projects and main activities of group companies & overseas subsidiaries — and their future strategies.

In July 2018, POSCO set its management philosophy of “Corporate Citizenship,” and a year later, in July 2019, it declared the “POSCO Charter of Corporate Citizenship” as a “compass” that informs employees and executives of the direction toward their destination, Corporate Citizenship. In addition to this, The CCMS was announced to commemorate the first anniversary of the Charter and is to act as a specific map that helps reach the objective.

As a practical and detailed guideline to enable the company’s growth, CCMS categorizes the company tasks into 13 modules, including strategic planning and finance, production, marketing, procurement, and R&D. Following a series of discussions amongst employees and executives, the Standards were drafted and modified to cover the mission, case, background, guide, and summary of each module.

Following the meeting, an unveiling ceremony was held for a media art created with POSCO’s Charter of Corporate Citizenship. The artwork by world-renowned media artist Lee-Nam Lee is titled, “Corporate Citizenship, the Light for Coexistence,” and visualizes the Charter being completed with molten iron poured from 7.25 m (The figure, 7.25, stands for 25 July, the day POSCO declared the Charter). It demonstrates POSCO’s commitment to the Charter as well as its strong will to carry out the CCMS.

POSCO plans to implement e-learning and internal discussions in department levels, as a measure to continuously deliver and spread the CCMS to its employees and executives.

Some renowned scholars who attended the event — such as Seoul National University Professors Kyung-Mook Lee & Seok-Ho Kim, and Ewha Womans University Professors Jeong-Koo Yoon & Jong-Soo Han — plan to research POSCO’s management system in pursuit of becoming a Corporate Citizen utilizing the CCMS. They will also carry out a study for a sustainable management system appropriate for the post-corona era. The results will be shared at the POSCO Forum in September and 2020 POSCO Corporate Citizenship Achievement Report in December.