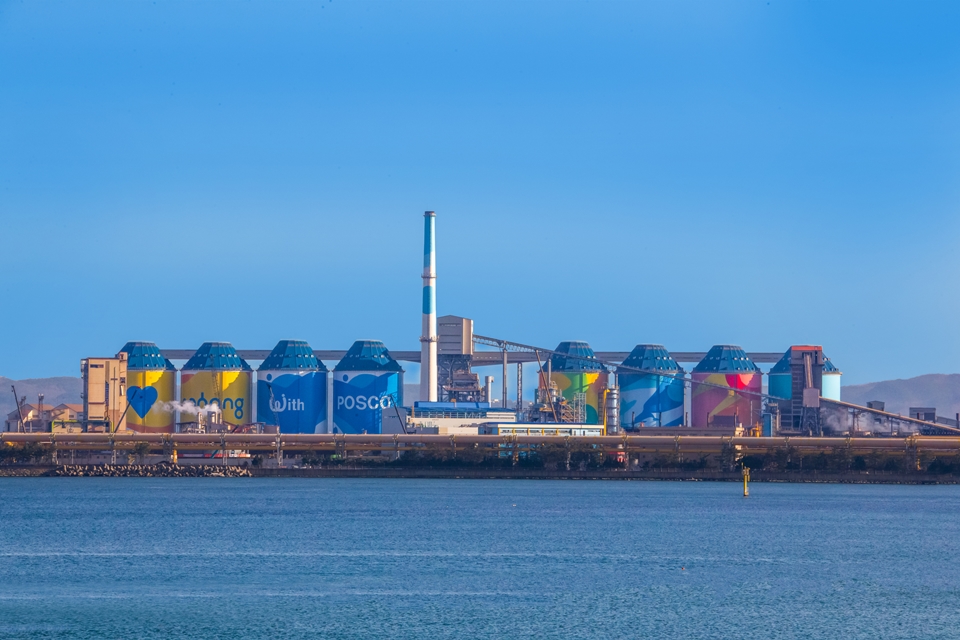 Recently, POSCO has invested more than 200 billion KRW to complete eight silos at Pohang Works. A silo is a sealed raw material storage facility that prevents the scattering of raw material particles by wind. By storing raw materials within a closed area, raw materials such as coal and limestone are kept from being blown away.

Since 2012, Pohang Works has utilized nine circular silos and one cell silo to manage raw material. With the completion of eight additional 50,000-ton silos last month, Pohang Works now possesses a total of 18 silos that are capable of storing up to 1,035,000 tons of raw materials. The newly added silos are expected to reduce air pollutants and dust generated while processing raw material at the steelworks. In the future, Pohang Works plans to increase the number of silo facilities gradually and keep raw materials sealed within them.

Pohang Works also aimed to revitalize the local economy with silo construction. Over the past two years, around 184,700 construction workers participated in the silo construction site, contributing to job creation in Pohang. In addition, the completed silos are expected to serve as a local landmark. The eight silos reaching about 56m have full-scale murals painted on them with the phrase, “I ♥ POHANG WITH POSCO”.

Meanwhile, in 2019, POSCO had announced plans to invest 1 trillion KRW in the environmental sector. As of last year, 970 billion KRW was executed for various projects to improve the environment other than the construction of silos, including the installation of Selective Catalytic Reduction (SCR) facilities at the sintering plant, the replacement of aged by-product gas generators with eco-friendly ones, and the installation of environmental dust collectors. POSCO plans to carry out large-scale environmental investments this year as well and install eco-friendly complex generators. The environmental management system within the steelworks is also to be improved. Recently, Pohang Works is planning to install the tele-monitoring system (TMS), which measures the amount of air pollutant emissions in real-time. It is also working on developing an environmental management system using smart technologies, such as an atmosphere management system, which provides air quality forecasts.