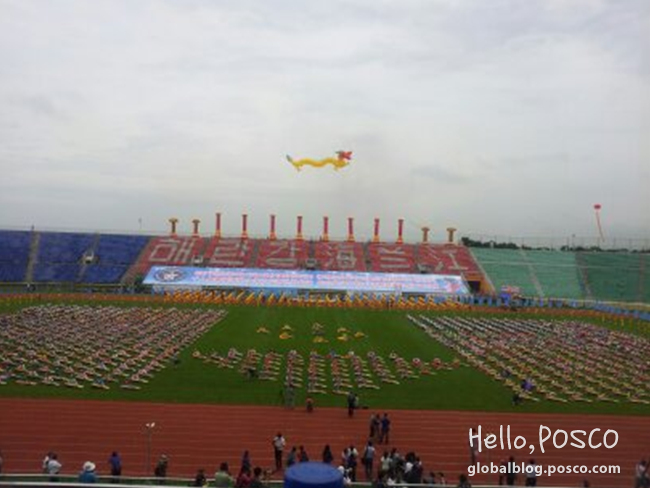 In the morning of August 26th, Longjing City’s Guinness Record challenge for the world’s biggest Gayageum chorus performance was held at the Hailan River Sports Complex. A group of 854 Gayageum performers, ranging from a 9-year-old girl to a 70 years old grandmother gathered around in Hanbok, the traditional Korean dress, to fill up the ground with their passions. 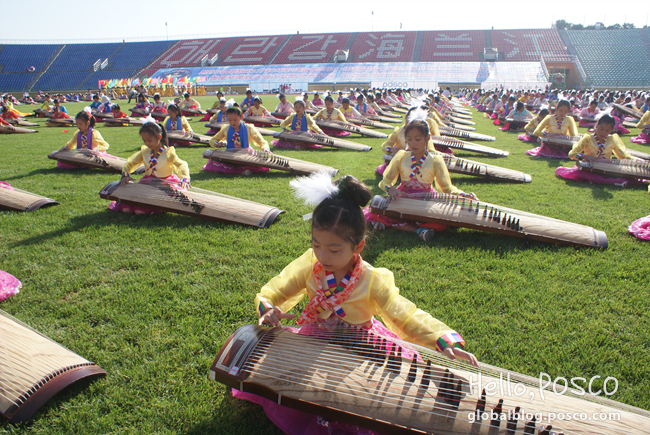 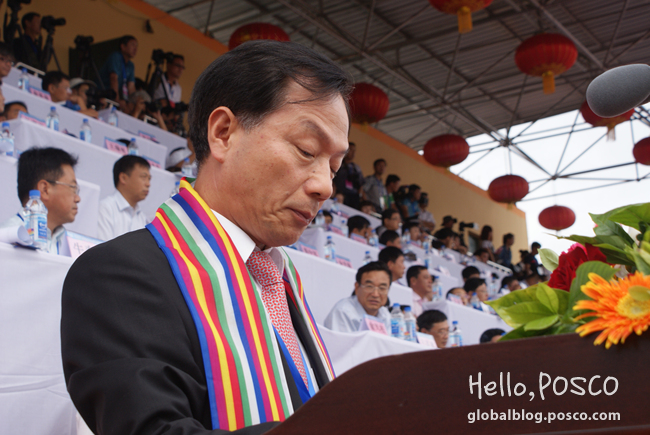 The event was sponsored by POSCO China and the Director of Corporate Staff Department Kam Gyu-sik congratulated the magnificent performance by saying, “The performance you will be delivering today is to be named as the world’s biggest Gayageum chorus performance by the Guinness Book of World Record. POSCO China is humbly honored to be a part of the Yanbian Korean Autonomous Prefecture’s relentless efforts to spread its culture to the world.”

The performance was orchestrated by the professor of Gayageum at Yanbian University Kim Seong-sam to play Arirang, Korea’s traditional melody rhyme, and a traditional Chinese song Jasmine, rearranged as a new beautiful harmony. 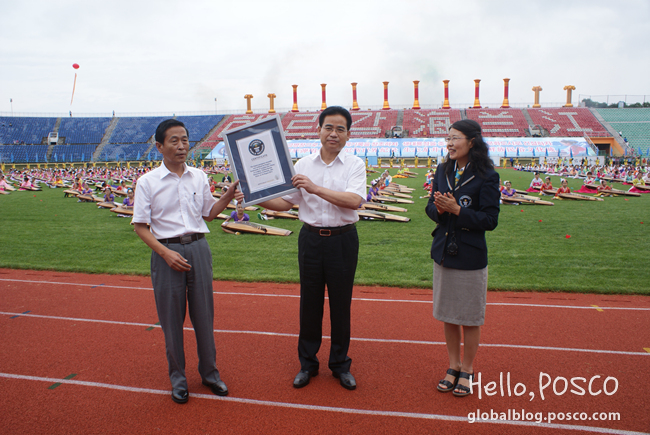 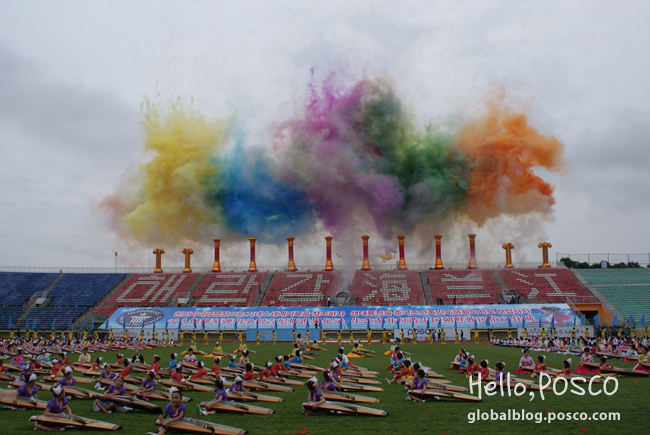 After 20 minutes of breathtaking performance, an inspector from Guinness World Records declared and confirmed that Longjing City’s Gayageum orchestra was successful to deliver the world’s biggest simultaneous Gayageum performance ever. When the official Guinness certificate was handed to the Mayor of Longjing, crowds and performers cheered for the great achievement, accompanied by splendid firecrackers set off to celebrate the new world record holders. 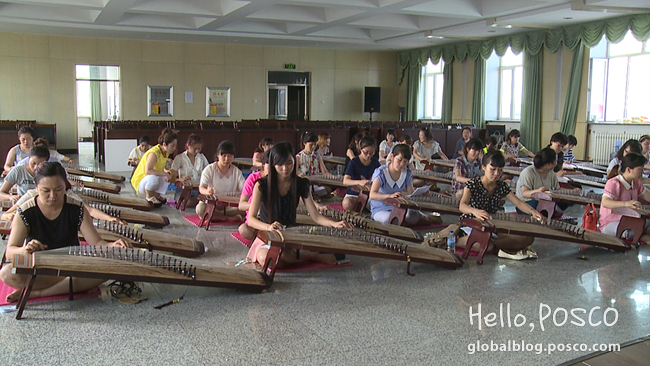 Behind the success of Longjing City, there were local elementary and middle schools which have been regularly running Gayageum classes for their pupils. Also, there were teachers, civil servants and members of local literature group and university for senior citizens. 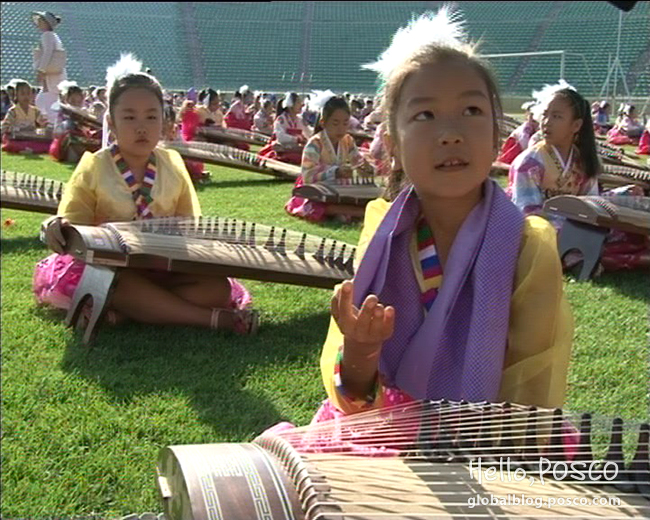 When we visited their practice hall, some of the performers were wearing plasters on their fingers. It showed how hard they were practicing the Gayageum over and over again. A little boy was also working hard to get used to his instrument for the performance. He told us, “It hurt a little bit when I first began but I can put up with such pain because I am proud of my hometown, challenging for the Guinness World Record.” By listening to his strong ambition, we could realize the degree of passion the performers were sharing amongst them. 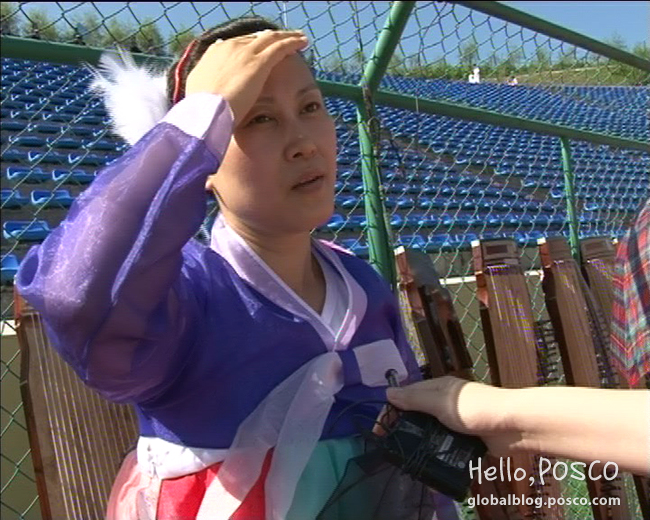 Before the performance, ‘Hello, POSCO’ had a chance to talk to the lady in above photo who came to the sports complex with her daughter for practice. She was representing the local government to be a part of the Gayageum chorus and said she was more than happy to support her daughter’s zest for playing the musical instrument and hope this opportunity could better her team work spirit. 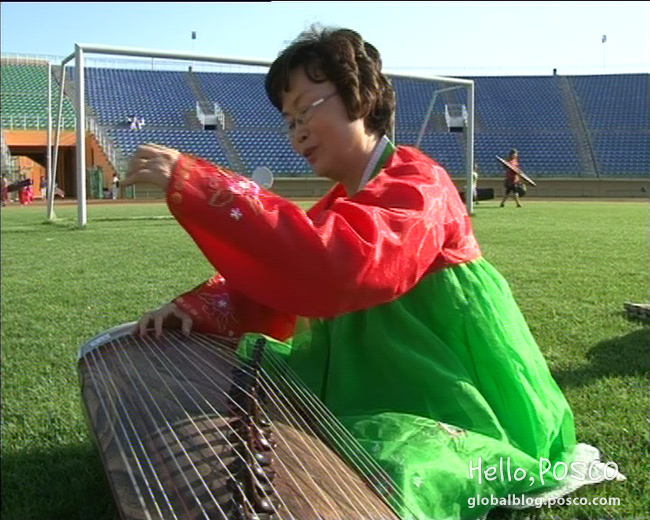 Ms. Lee Geum-nyu was born in Longjing and has been living in the city for the past 63 years. When we asked why she volunteered to join the challenge, Ms. Lee answered, “I am getting old and when would I have this kind of opportunity to learn how to play the Gayageum? Also, this is something I can do for my home town.” 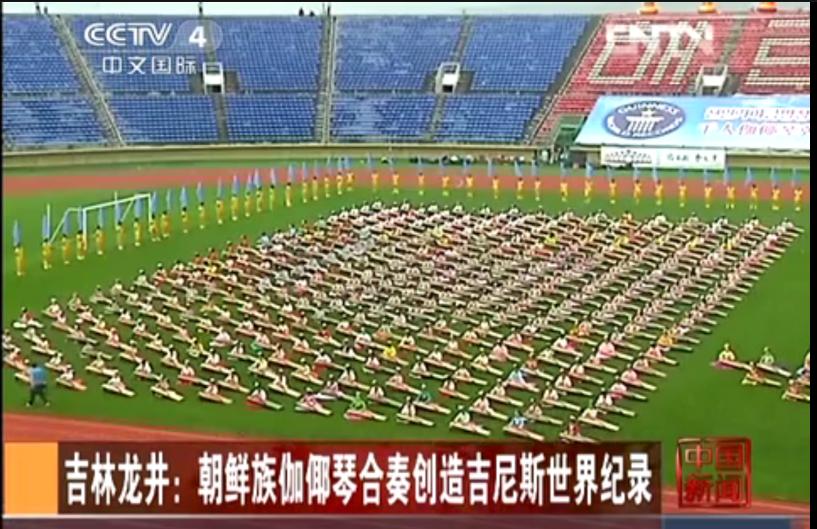 Notably, the performance was reported by CCTV, China’s state television broadcaster, showing how important the challenge was. By the success of achieving the Guinness World Record, Longjing City has marked an important page of its long history.

Since 2011, POSCO China is also supporting the City’s continuous engagement to maintain the cultural heritage with the Longjing Social Contribution Fund to sponsor their education programs for Longjing’s heritage and culture. ‘Hello, POSCO’ once again give Longjing City a big round of applause and we look forward to seeing more fruitful achievements of the city’s partnership with POSCO China.

POSCO China was established in November 2003 and now operates Zhangjiagang POSCO Stainless Steel, Shunde POSCO Coated Steel and other POSCO-invested corporations in China. POSCO China supports the exports of POSCO product from Korea to China, and sources steel raw materials and other related-products from China to Korea. The corporation provides professional assistances for financing, HR and legal services for the local affiliates so they can be competitive and sustainable. Also, POSCO China partners with China’s governmental bodies and steel companies for the development of new investment businesses.