There’s always a good leader in a successful organization. One of the key reasons to POSCO’s international success is due to a skillful leadership, a global mindset and an ability to envision a big picture of our CEO, Chung Joon-yang.

During an annual meeting of the World Steel Association (worldsteel) in New Delhi, India, Mr. Chung was appointed as one of the two vice chairmen. He is expected to become worldsteel chairman in October 2013 as precedents complied by worldsteel, and will serve his term from 2013 until 2014.

[box] What is worldsteel?

worldsteel is the international trade body for the iron and steel industry. The association represents approximately 170 steel producers (including 17 of the world’s 20 largest steel companies), national and regional steel industry associations and steel research institutes. worldsteel members represent around 85% of world steel production. The purpose of the association is to promote steel and the steel industry to customers, the industry, media and the general public. worldsteel is a non-profit organization with headquarters in Brussels, Belgium.[/box]

This is a remarkable honor for POSCO as a whole and for our CEO Mr. Chung as well on a personal level. We are glad and excited that through Mr. Chung’s appointment to worldsteel’s executive body will strengthen POSCO’s global status, as well as upgrade Korea’s role in the international steel industry. However, even before receiving this title of the Vice Chairman, Mr. Chung was praised by the international steel community for his work as an executive member of the Executive Committee, which is the top decision-making body within the institution that also oversees worldsteel’s day-to-day work.

This 46th annual gathering was attended by over 200 CEOs of leading global steelmakers, including Chung and ArcelorMittal Chairman Lakshmi Mittal, and heads of steel-related institutions. 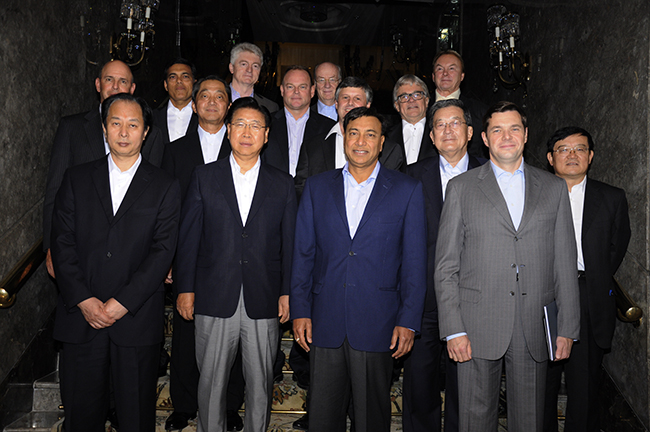 Let’s look at who else attended the meeting. Maybe you might recognize a few. On the first row, from the right, are Alexey Mordashov, CEO of Severstal in Russia, next to Lakshmi Mittal of ArcelorMittal, Mr. Chung of POSCO, and CEO Zhang Xiaogang of Ansteel in China. Other participants of worldsteel’s 46th annual meeting included Chairmen John P. Surma of US Steel and Shoji Muneoka, CEO of Nippon Steel & Sumimoto Metal Corporation.

In this meeting, worldsteel members shared and discussed their 2013 Agenda, some of the challenges and necessary changes the international steel community faces, and new technological researches to the solution. Here, POSCO presented POSCO Body Concept-Electric Vehicle (PBC-EV) to the world audience. This is our newest and the most ambitiously created product. PBC-EV is both light in weight and sturdy in sustainability, yet it can be produced with a low-cost investment.

As becoming the Vice Chairman of worldsteel, Mr. Chung emphasized some of the most important issues faced by the global steel industries, such as handling of raw materials, adjusting of supply and demand and strengthening sustainability for the benefit of all steel community. Furthermore, “Global POSCO Strategy,” which POCO is strongly pushing for will also excel greatly. One of Mr. Chung’s most anticipated actions also include effectively mediating an active interaction between the founding members of worldsteel (most of whom located in Europe and America) and the emerging industries of Asia.