l Kyu-Jeom Chung and Jeong-Ho Lee of Pohang Works and Byeong-Geun Son of Gwangyang Works selected as POSCO Masters
l All Masters receive a special promotion, prizes, and an opportunity to advance into the executive level 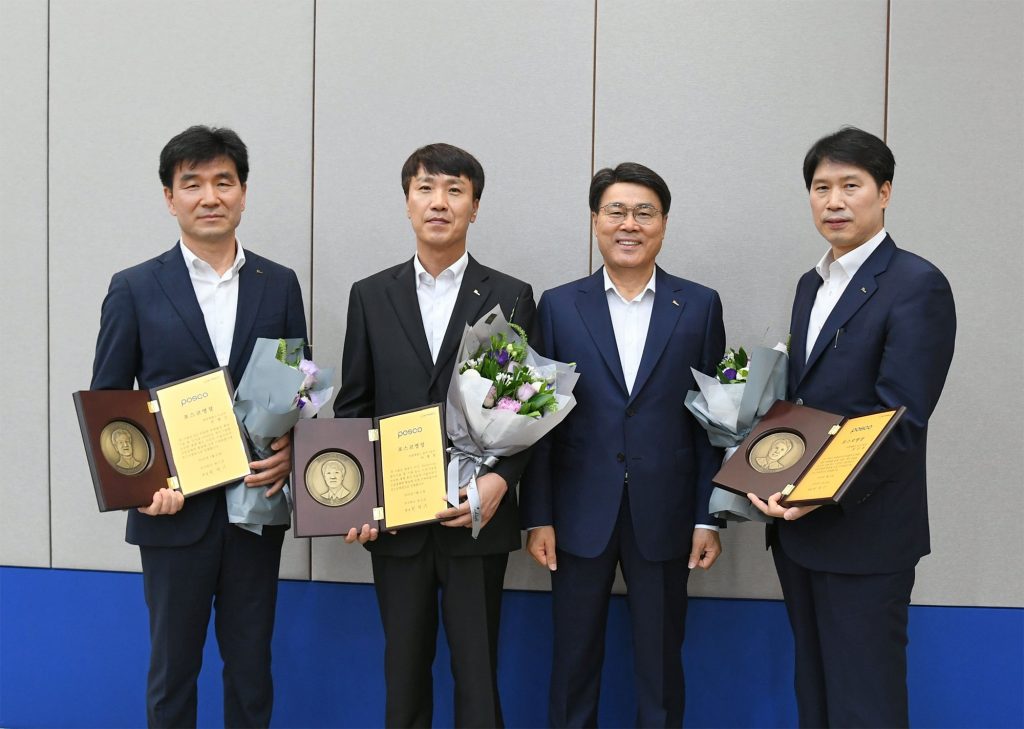 At the July group session, POSCO CEO Jeong-Woo Choi announced the following employees as POSCO Masters: Pohang Works’ Kyu-Jeom Chung from EIC and Jeong-Ho Lee from the Maintenance Technology Department, and Gwangyang Works’ Byeong-Geun Son from the Surface Treatment Department. POSCO CEO Jeong-Woo Choi said, “I hope that the passion and efforts of the three POSCO Masters spread so that all employees working in the field will be encouraged to become Masters as well. I also hope that the three Masters take the lead in implementing corporate citizenship and strengthen field competitiveness as role models of ‘technical personnel,’ which is the source of POSCO’s competitiveness.”

Since 2015, POSCO has been selecting three POSCO masters annually, and this year’s awardees would also be entitled to a special promotion and additional prize worth of 20 million KRW. In addition, those Masters with outstanding performance will be given an opportunity to become executives. In 2018, Byoung-Rak Son, who was selected as a POSCO Master in 2015, was promoted to Vice President.

Master Kyu-Jeom Chung of the Electrical, Instrument & Control Technology Department in Pohang Works joined POSCO in 1985, and he is the best expert in the field of maintenance and repair of power system facilities at steelworks. Master Chung has established an infrastructure that prevents power outage, thus contributing to a stable power supply at the steelworks. He also possesses another operation technique — the optimal operation of the protection system for power facility — that minimizes operational damage by taking prompt action in case of facility failures as well as enables preemptive management of the facilities. Chung also devoted himself over 200 hours last year to training new employees and fostering facility experts. He said, “I’m overwhelmed on being appointed as a POSCO Master. I will think about what I can do for the company and focus on improving the competitiveness of the steelworks.”

Jeong-Ho Lee of the Maintenance Technology Department in Pohang Works joined POSCO in 1987 and is the first graduate of POSCO Technology University. He is an outstanding professional with technique to manage vibration and balancing of rotating facilities, such as motors, turbines, and blowers within the steelworks, and capability to repair mechanical parts. Master Lee contributed to reducing cracks of rotating facilities that move the BOF in the steelmaking process. He also has excellent skills in repairing and renovating overall rotating facilities, such as extending the lifespan of power generation facilities and rotating facilities in the steelworks and applying technology that helps stabilize vibration. Master Lee is also well recognized by fellow employees for his leadership in communication, including his active involvement in solving technical problems for junior employees. He said, “Following Master Cha-Jin Kim (Blast Furnace Maintenance Section of Pohang Works), it is a pleasure for me to represent the mechanical sector as a POSCO Master, and I’m thinking of ways I can contribute to the company. I hope to fill in the gaps between my junior and senior colleagues.”

Byeong-Geun Son of Gwangyang Works’ Surface Treatment Department joined POSCO in 1987. He succeeded in improving the surface treatment of Electrical Galvanized steel, a high value-added product used as automotive external materials, and in differentiating product quality by developing technology to produce ultra-wide materials. Master Son achieved significant results in establishing a system that assures the mass production of GIGA steel. He also contributed to securing both customer satisfaction on the quality and a competitive edge against global competitors by reducing End mark that occurs while winding coils. Master Son said, “I could achieve good results, such as this Master title, while faithfully doing my job I will share my expertise and experiences accumulated so far with colleagues and contribute to improving their capabilities.”

Alongside the existing 13 POSCO Masters, the newly appointed POSCO Masters are expected to enhance POSCO’s technological competitiveness through various activities, including the transfer of technical skills in specialized fields, special lectures for new employees, suppliers, and clients.