On July 25th, POSCO held an investor relations conference call to announce that POSCO achieved a KRW 15.6 trillion in revenue, based on consolidated financial statements for Q2 2013, accompanied with an operating profit of KRW 903 billion and a net profit reaching KRW 241 billion. 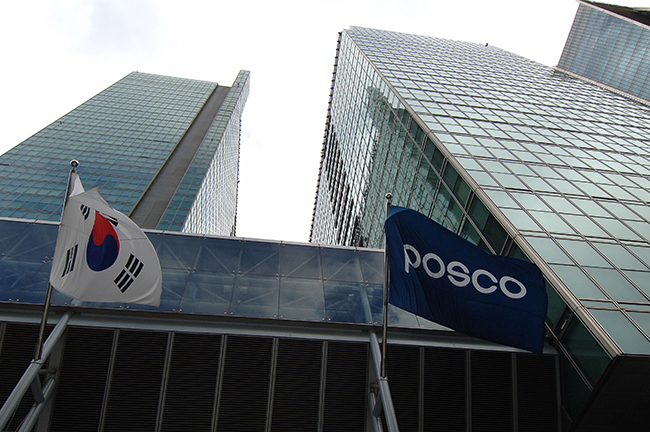 Bolstered by the enhanced performance in steel sector and the increased level of contribution from construction, energy and ICT sectors, POSCO’s operating profit has increased by 25.9 percent from the previous quarter. The revenue and operating profit solely accomplished by POSCO reached KRW 7.74 trillion and KRW 703 billion.

POSCO’s Q2 2013 sales by product also increased from the last quarter, rocketed by selling 3.71 million tons of Top 4 high value-added products, including the products for automobile, energy, shipbuilding and home appliance. The figure improved by 3.5 percent QoQ. It is a meaningful advance made by POSCO because the total number of sales had been slightly decreased due to the restricted number of shaft furnaces at Gwangyang Steelworks. Notably, despite a weak yen, POSCO’s sales actually rose in China and Southeast Asia, the major competition markets, by 14.3 percent and 12.3 percent YoY.

Cumulative cost-saving result was completed at KRW 142.9 billion from raw materials and KRW 45.5 billion from materials. With the boost, POSCO is expecting to generate an annual cost-saving cash flow of about KRW 730 billion. Notably, the cost-savings from manufacturing molten iron is forecasted to stretch at KRW 100 billion as the world’s biggest ‘Furnace 1’ at Gwangyang Steelworks has successfully launched its operation in June.

For this year, the outlook for the global steel manufacturing market indicates that the demand curve could pick up by 3 percent from last year with the demand growth trend remaining bullish at 6 percent in Southeast Asia and other emerging markets. China, the world’s biggest steel product market, is anticipated to recover its price of steel after the third quarter.

For 2013, POSCO has set its target for the annual consolidated revenue at KRW 64 trillion as well as POSCO’s independent revenue of KRW 32 trillion.