POSCO held its 2016 Investor Forum in New York on February 12, where it announced to overseas investors its management performance and main activities in 2015, as well as its management plans for the upcoming year. 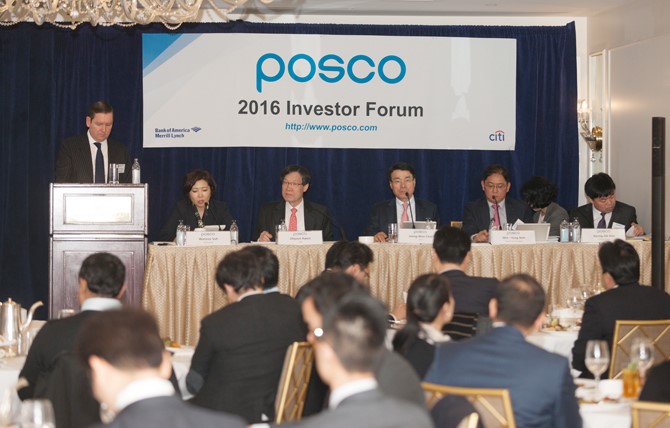 Officials from 24 investment institutions in New York, including McKinsey & Company and TIAA-CREF, attended the forum and expressed their interest in POSCO’s management activities, including “Innovation POSCO 2.0.”

POSCO announced that its sales revenue and business profit margin dropped year on year due to the company’s poor performance following the slump in domestic and international market conditions last year. POSCO also added that its loss recorded 1.56 trillion KRW, leading to a 96 billion KRW year-on-year net loss during the term.

Despite the slump in the market, sales revenue and profit margin achieved a stable status, reaching sales volume of 35.34 million tons—the largest in POSCO’s history. Moreover, POSCO noted that its net profit during the term grew through the increase of sales of high value-added products, such as World Premium (WP) products, as well as the increase of solution marketing-related sales. 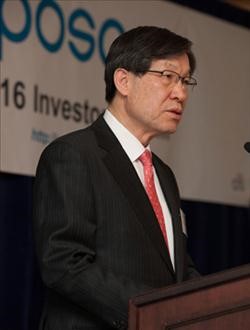 President Kwon continued with a Q&A session with investors after the presentation on management performance and management planning.

In response to China’s recent plans to reduce its steel productivity by 100 million tons, President Kwon stated, “The problem of China’s steel oversupply has lasted for a few years and the market imbalance has become worse after the export of products that are priced lower than the marginal unit cost. The Chinese government has consistently shown its determination to resolve the oversupply issue, but its efforts did not amount to essential reduction.”

He also added, “However, considering the central government’s recent announcement by Premier Li Keqiang regarding the reduction of obsolete equipment, and the fact that 80 percent of Chinese steel companies experienced loss since the second half of 2015, the feasibility seems to be higher than before.”

“As the steel price has shown small rebound at the beginning of the year, fast market recovery can be expected if the structural regulation is executed properly,” Kwon stated. “We have exceeded the goal of restructuring in sub-companies since Innovation POSCO 2.0 was announced last year and achieved a bigger amount on hand than that of 2009 through restructuring assets. We also raised performance in original technology sales through moving 1FINEX and CEM technology and exporting related technologies. We will continue to strengthen our competitiveness of steel this year by collaborating all capacities on acceleration and structure innovation, which includes business structure, cost structure, profit structure and consciousness structure.”

Regarding technology competitiveness maintenance through POSCO’s R&D investment management, Kwon noted, “POSCO has a larger R&D investment compared to other global competitors and is maximizing R&D investment efficiency through intimate cooperation and a trading relationship with the Technology Institute, along with production engineers. We will continue to focus on strengthening POSCO’s original technology competitiveness this year by including the sales force in the cooperation relationship for completing the solution marketing model.”

POSCO was the first Korean firm to be listed on the New York Stock Exchange (NYSE) in 1994 and President Kwon himself rang the closing bell at NYSE last February in celebration of the twentieth anniversary of the company’s listing.