l The operating ceremony of eco-friendly Alternative Maritime Power Supply (AMP) held on March 5
l AMP — electricity supplied from onshore to the ships anchored in a harbor — is set to replace fuel power and emit zero air pollutants
l With around 250 vessels transporting POSCO products annually, more than 15 tons of air pollutants expected to be reduced when utilizing AMP supply 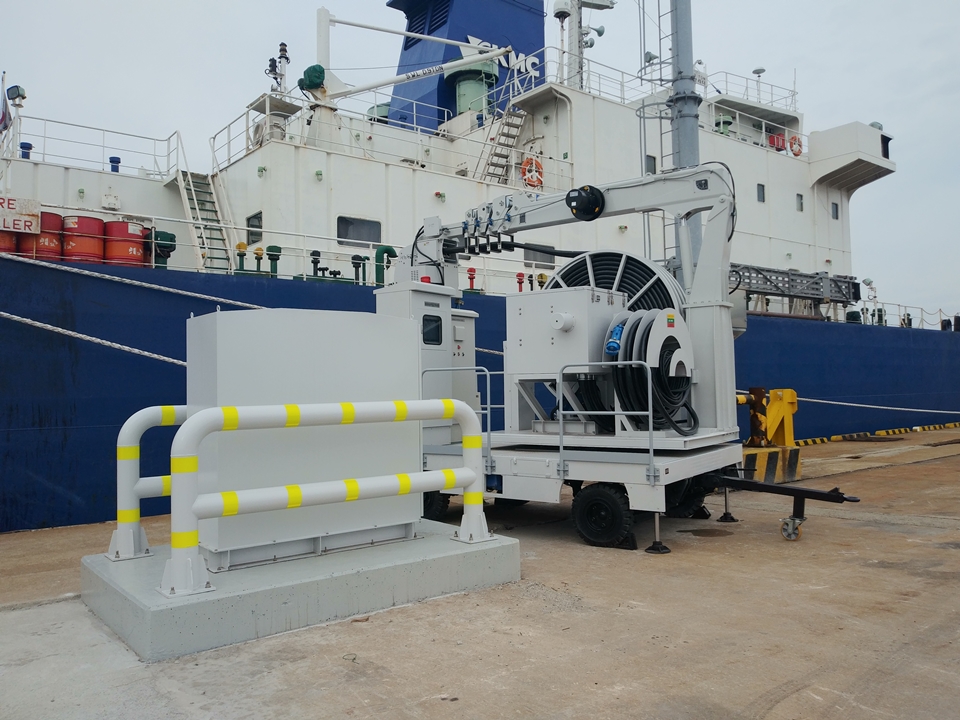 ▲ The Gwangyang Leader, a vessel transporting POSCO products, is anchored at the Pyeongtaek and Dangjin ports and is receiving electricity from the Alternative Maritime Power Supply (AMP). (Photo courtesy of Pyeongtaek Regional Office of Oceans and Fisheries)

Previously, ships anchored at the port obtained the necessary power by operating the fuel generator onboard. However, by using the AMP, there is no need to run the engine and generator, thus, air pollutants, such as fine dust, sulfur oxide, and nitrogen oxide, are not emitted.

In August 2018, the Ministry of Oceans and Fisheries launched a pilot project to install AMP. In the following year, it announced plans to expand the project to 248 vessels anchored in 12 major ports nationwide, including Busan Port, Incheon Port, Gwangyang Port, Pyeongtaek/Dangjin Port, and Pohang Port. The purpose of the project is to reduce air pollutants from ships.

POSCO also agreed to participate in the AMP installation project in March 2019, and in November 2019, POSCO signed an MOU regarding the installation and utilization of AMP with the Pyeongtaek Regional Office of Oceans and Fisheries, Kwangyang Marine Corporation, and Yoosung TNS. Kwangyang Marine Corporation transports POSCO products, and Yoosung TNS is in charge of managing and distributing them. During the next year, the Pyeongtaek Regional Office of Oceans and Fisheries and the shipping company completed installing the AMP and power reception facilities in each vessel. After a month of safety inspection and pilot operation, it was put into full-fledged actions on this day.

POSCO secures more than 250 trips per year for berth 13 in the eastern part of Pyeongtaek/Dangjin Port, where the AMP has been installed. As a result, it is expected that air pollutants emitted by ships will be reduced by more than 15 tons per year*. The reduction of fine dust totals 1.5 tons which is equivalent to planting about 41,000 trees. Also, by utilizing onshore power instead of fuel oil, fuel costs could be reduced by 100 million KRW annually.

Head of POSCO Logistics Business Kwang-Soo Kim said, “The construction of the AMP is a part of POSCO’s efforts to improve the air of business sites near the port and protect the workers’ health by disabling the emission of air pollutants from ships anchored at the port. POSCO will continue to promote eco-friendliness in transportation and unloading equipment, and actively participate in improving air quality in the port areas.”

Chief of Pyeongtaek Regional Office of Oceans and Fisheries Jong-In Kim also added, “The construction of the AMP promoted with POSCO will remain as an exemplary case in improving the air quality showing public-private cooperation. In the future, Pyeongtaek/Dangjin Port will try to improve the life quality of local residents by gradually expanding the AMP.”