Korean National Steel Day, established to commemorate the historical moment, is celebrating its 20th anniversary this year. As we commemorate the Steel Day 2019, it is with a grave sense of duty to our communities, as we trace back to that very moment when POSCO laid the foundation for Korea’s steel industry. POSCO Newsroom reports:

l At the First Drop of Molten Iron, Tears were Shed

During the 1960s, when the whole country was still reeling from the wounds of the war, the Korean government firmly believed and hoped the steel industry is what will lift the country off abject poverty. The government saw the steel industry was fundamental as it serves as the basis to the other industries like shipbuilding, transport equipment, machine and tool making industry, etc. The integrated steelworks for Pohang Iron and Steel Company, now POSCO, took off. POSCO was conceived carrying the entire country’s hope on its shoulders.

“We are building the integrated steelworks on the blood of our ancestors. If we fail, we will be committing a sin that can never be forgiven. So, we must pledge to turn ‘right face’ and drown ourselves in Yeongilman Bay if we are unable to complete this project.”
– Tae-Joon Park, the founder-CEO of Pohang Iron and Steel Company, at the groundbreaking ceremony for Pohang Steelworks on April 1, 1970

Today, CEO Tae-Joon Park’s resolutely determined speech might sound overly dramatic, or even combative – but such was the sentiment of the time. The Pohang Iron and Steel Company did carry the entire country’s hope on its shoulders, and CEO Park was determined to answer the calling. That’s why his sincerity resonated with all those attending the ceremony.

From funding, capacity, and to infrastructure, the project lacked just about everything – but the grim determination and dedication from CEO Park’s speech carried the project forward. Despite the challenging circumstances, the company achieved what felt like a miracle – blast furnace, the heart of every steel mill’s operation, was finally completed. 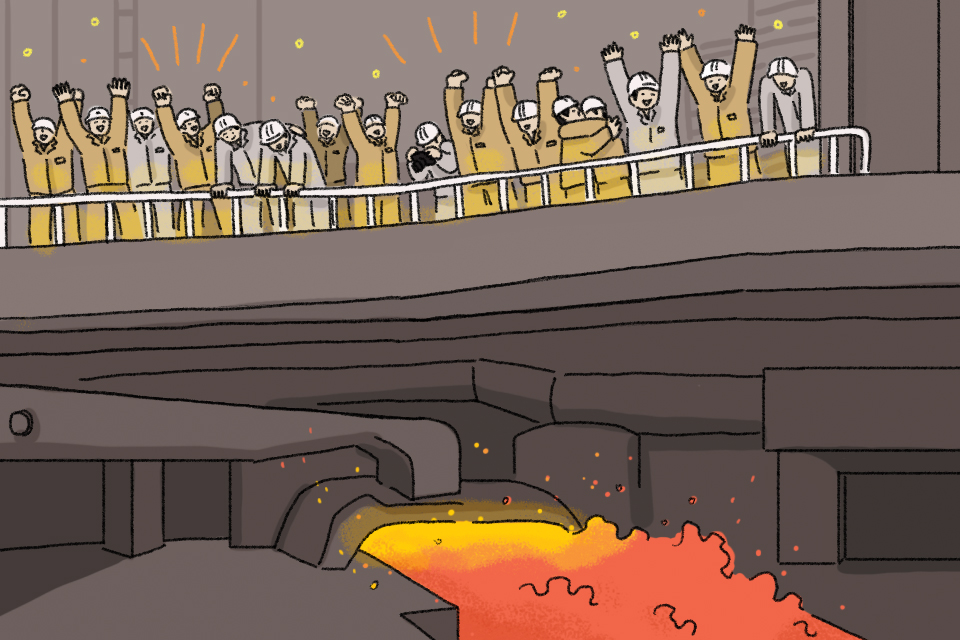 The executives and employees of the Pohang Iron and Steel Company who had been waiting anxiously for the molten iron to flow shouted “Hoorah!” at the top of their lungs at the sight. Since the furnace had been fired at 10:30 a.m. on June 8, the executive and employees had waited 21 hours for the great feat.

l The First Drop of Molten Iron, To Be Continued

For those who remember the first drop of molten iron, they can’t help getting slightly choked up at this time of the year. The working condition now is incomparable to that of 46 years ago thanks to Immense advance in technology, but the work goes on. 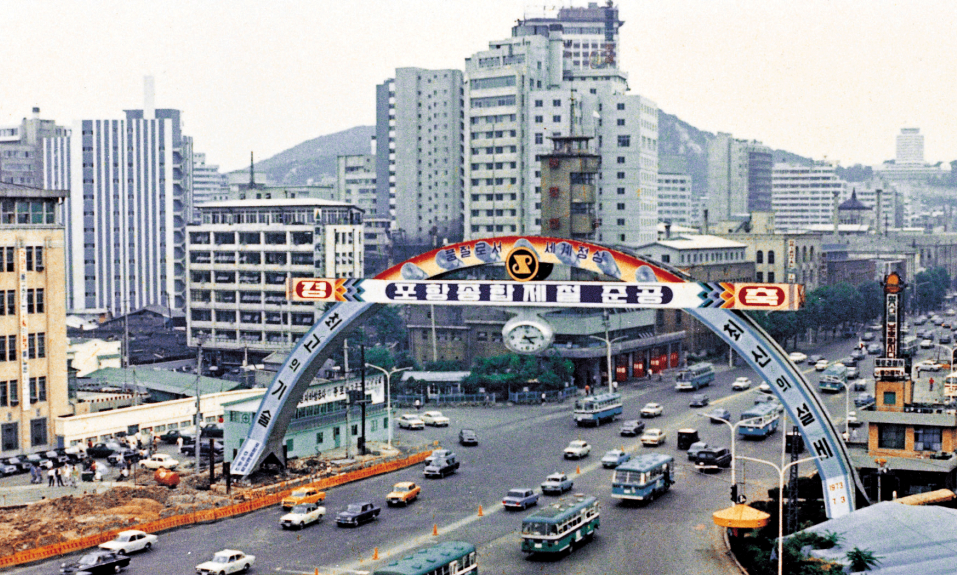 ▲ An arch commemorating the completion of the Pohang Steelworks erected in Gwanghwamun, Seoul.

On July 3, 1973, the Pohang Iron and Steel Company held a completion ceremony for Phase 1 of the construction of the Pohang Steelworks. It was a national accomplishment that attracted the interest of all citizens and was reported by all media and the press.

On March 15, 2002, the Pohang Iron and Steel Company changed its name to POSCO and declared its commitment to becoming a global enterprise. POSCO’s success is unprecedented even in the history of the global steel industry. POSCO’s Gwangyang Steelworks expanded to become the world’s largest integrated steelmaking operation. Furthermore, the world’s second-largest steel plant is also POSCO’s Pohang Steelworks. Both steel mills had produced a total of 971 ,386,000 tons of steel since POSCO’s establishment in 1973. POSCO’s legacy as the world’s most competitive steelmaker was not built overnight, and the company’s tireless dedication helped create the ‘Miracle on the Han River’. 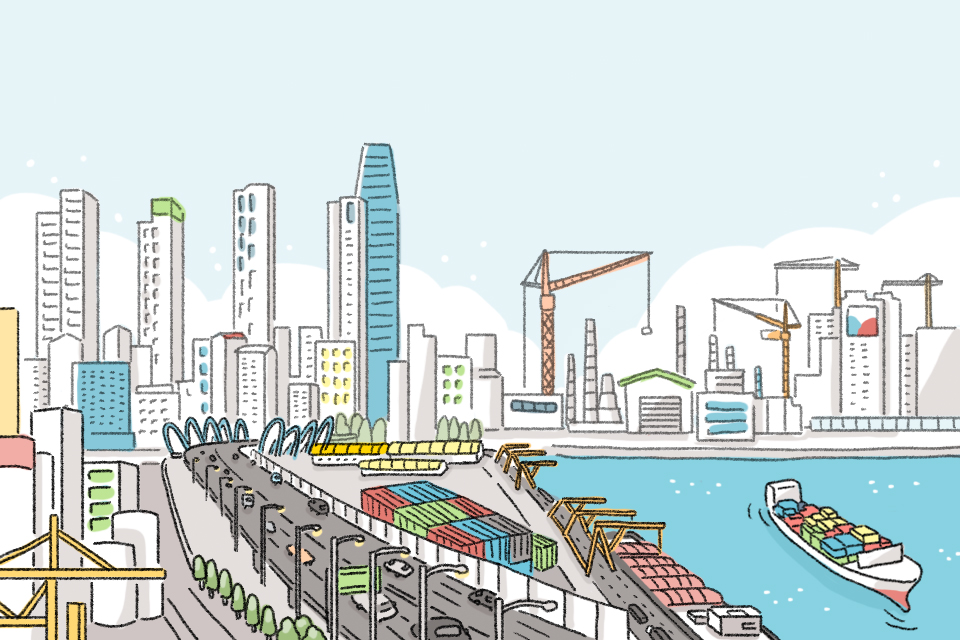 The steel industry is known as a fundamental industry as it supplies base to the other industries. It provides raw materials to shipbuilding, transport equipment, machine and tool making industry, aircraft, etc. As POSCO flourished, Korea’s core manufacturing industries such as automotive, shipbuilding industries saw tremendous growth – POSCO provided quality steel at a competitive price. Comparing the performance across various sectors before and after POSCO’s existence makes the distinction clear.

According to the Ministry of Trade, Industry, and Energy, before 1973 (Pohang No. 1 blast furnace completion), Korea’s shipbuilding production was at 12,000 CGT (Compensated Gross Tonnage). As for the auto industry, the country could produce only 25,000 cars per year.

<POSCO’s Steel Production and Its Impact across Industries>

How about per capita income? The Bank of Korea statistics indicates Korea’s GNI per capita was at 401 USD in 1973. In 2018, it skyrocketed to 31,349 USD – 78 times higher than in 1978. Not all Korea’s success can be attributed to steel – nonetheless, the Miracle on the Han River was built on the whole country’s struggle, and the steel industry was very much part of that journey.

There is no doubt the steel industry faces new challenges. Some public opinions dictate that innovation is a mission impossible in the steel sector – because steel uses fossil fuels and causes air pollution.

A more holistic approach, however, highlights the sustainability of steel. Its high recyclability being the clear advantage, steel is one of the core materials for the renewable energy sector. Because of its contribution to GDP, exports, and other sectors, the steel industry is identified as a high value-added industry that we simply can’t live without.

From a life-cycle approach, which takes the whole chain of a product’s life cycle into consideration, steel sustainability becomes more prominent. With 85% recyclability, steel is the only truly cradle-to-cradle recycle material. Furthermore, high-strength steel can lightweight products helping reduce greenhouse gas emissions, which makes steel both sustainable and economically viable. 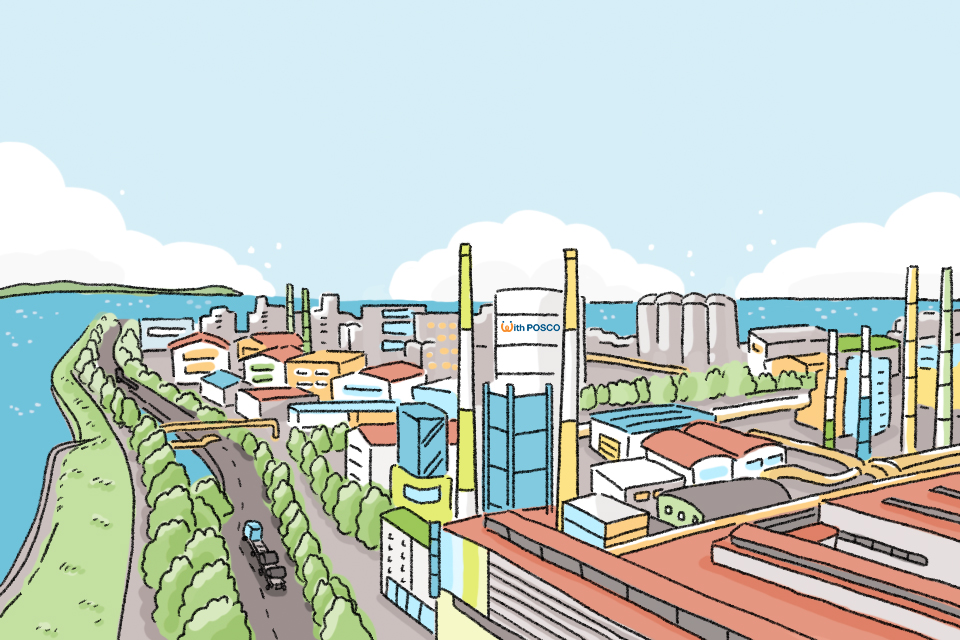 The steel industry, itself export-intensive, creates growth opportunities for other industries so they can produce quality products that are export-worthy. To that end, POSCO’s journey towards the hundred-year enterprise will accompany the following – top-quality products and first-class client services; competitive pricing of raw materials through high-tech smart factories and optimal production process; solid industry analysis to spot new opportunities – through which the company will venture ahead into yet another challenging, but promising future.