Last Summer, the American Institute of Steel Construction (AISC) announced a call for entries for the inaugural Forge Prize — an award to celebrate innovative architects who create visionary designs. The participating designers across North America vied for a chance to showcase their design concepts using steel as the primary structural component.

POSCO Newsroom had been following the progress of the contest and conducted an in-depth interview with the Grand Prize Winner Jin-Young Son and discussed his winning idea, SIMS – Snap-Interlock Module System (Check out his interview here).

The Snap Interlock Module System (SIMS) is an elegant, steel-built innovation that could shake up modern construction methods.

Steel is the cornerstone of the construction industry. The adoption of steel beams has facilitated the construction of more ambitious buildings and infrastructure, but has remained relatively unchanged over the last century.

Now, an award-winning innovation is promising a new era of innovation in architecture and engineering.

In 1953, German architect Konrad Wachsmann imagined a structural component that could be industrially produced and universally deployed as the basis of any construction project. He wanted to standardise the basic building blocks of the construction industry like LEGO pieces that could fit into any project.

“The balance between the elastic property and the structural strength of steel can be precisely calculated and controlled by numerical analysis.”

The idea of a universal structural component has caught the imagination of other architects and engineers over the years, but finding a suitable material or design proved difficult.

Inspired by this challenge, Jin Young Song, an assistant professor at the University of Buffalo, began experimenting with interlocking steel components. He used digital models and 3D-printed prototypes to arrive at a module with four hooked legs that snapped together.

Each module has four interconnecting legs and a central slot. Two modules slide together to create a dual axis shape with eight points of connection. Each of these points connects with the leg of another module allowing simple, sturdy structures to be easily assembled. 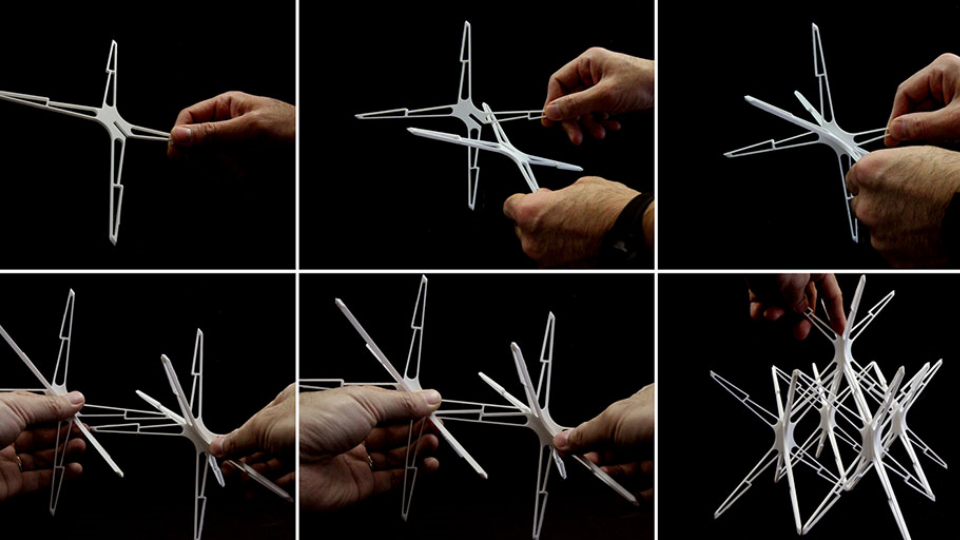 ▲ Each SIMS module has four legs and a central slot that form the basis of its structure (Image Source: Dioinno Architecture PLLC / Jin Young Song)

The Snap Interlock Module System (SIMS) demonstrates remarkable durability and is flexible enough to produce endless geometries. Best of all, it’s so simple it can be assembled by a single worker.

Song considered a number of different materials to construct the modules out of, but ultimately the dependability of steel made it ideal for his system.

“The balance between the elastic property and the structural strength of steel can be precisely calculated and controlled by numerical analysis,” stresses Song.

“Advancements in the fabrication of steel using multi-axis cutting with parametric tools, robotics, and additive manufacturing are accelerating new uses of steel.”

“The assembly is so simple that a one-storey steel pavilion can be built in a backyard and that’s a game-changer.”

The simplicity of SIMS combined with the strength of steel could drastically reduce the complexity of construction projects. Unlike conventional steel beam and post construction methods, building with SIMS requires no welding or bolting.

New designs can be rapidly tested and temporary structures can be assembled and once they’re finished the modules can be packed up again for use in a future project.

SIMS opens up a whole new world of possibilities for architects and engineers. It could potentially be applied in the construction of partition walls, substructures and fences. But for Song, the most exciting application probably hasn’t even been thought of yet.

“We are exploring a couple of interesting ideas such as using SIMS to build envelopes for solar panels or rain screens. But really, because the system is based on easy assembly and the idea of modular stocking, what’s most exciting is how other people will use it.

“The assembly is so simple that a one-storey steel pavilion can be built in a backyard and that’s a game-changer.”

The original content published on the worldsteel’s ‘Our Stories’ section is available at: https://stories.worldsteel.org/construction-building/snap-interlock-modular-system-transform-construction/