The Latest Korean Soap Opera You Have to Watch!

The Heirs…My Love from the Stars…Do you remember the Korean dramas that swept our hearts in 2014? Korean soap operas are taking the world by storm and even influencing foreigners to learn Korean and Korean culture. After the female lead from My Love from the Stars, Jun Ji-hyun, mentioned “beer and fried chicken” in one episode, it significantly boosted chicken & beer sales in China. 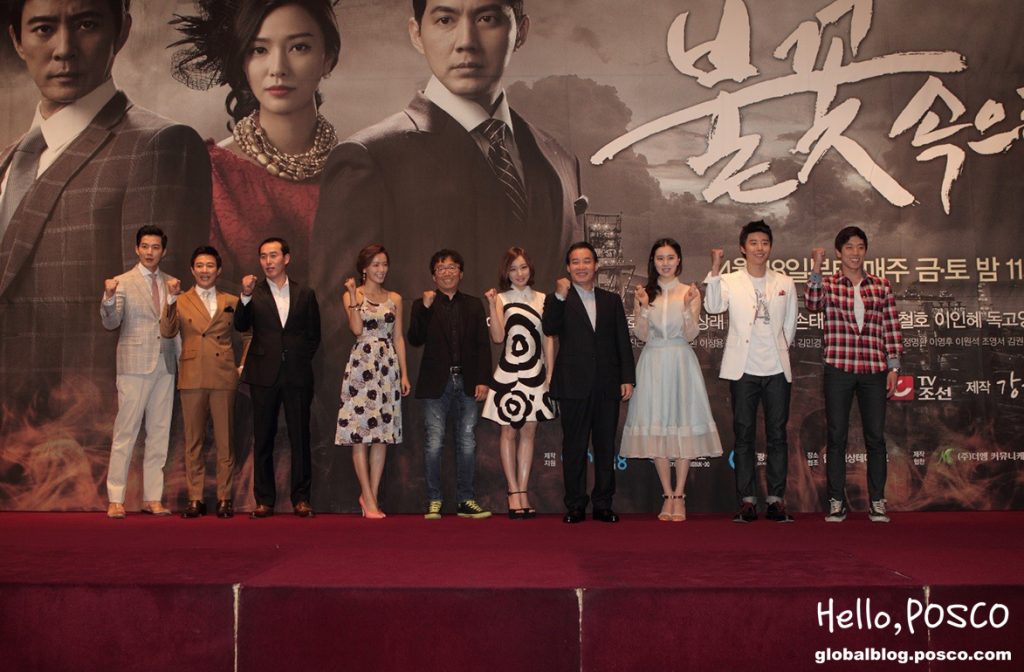 Pictured here: Production presentation with the stars of Into the Flames

Dramas are being translated into multiple languages so that audiences beyond the domestic market can follow all the latest “K-dramas”. It is amazing to see this change in perception especially when one considers the war-stricken country that Korean was 60 years ago. Did you know that a huge turning point and growth driver for the Korean economy was… the steel industry?

Into the Flames, which begins to air this month on TV Chosun, attempts to dramatize the true story of the founding of POSCO, Korea’s leading steelmaker, during Korea’s more turbulent times.

Into the Flames, the dramatized founding story of POSCO 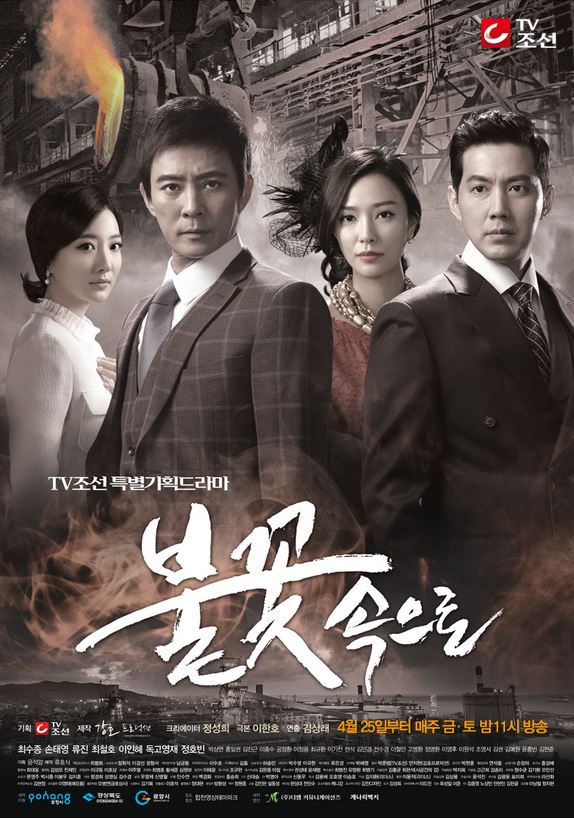 Into the Flames takes place during the 1960~70s with Korea depicted as a poor, war-ravaged country. It is during this period that Korea began to modernize as passions transformed into reality. The dreams of the self-made man, the equivalent of the ‘American Dream’, was very much alive during this period. The beginnings of POSCO took place precisely during these times.

The Story of Koreans Reaching for the Impossible 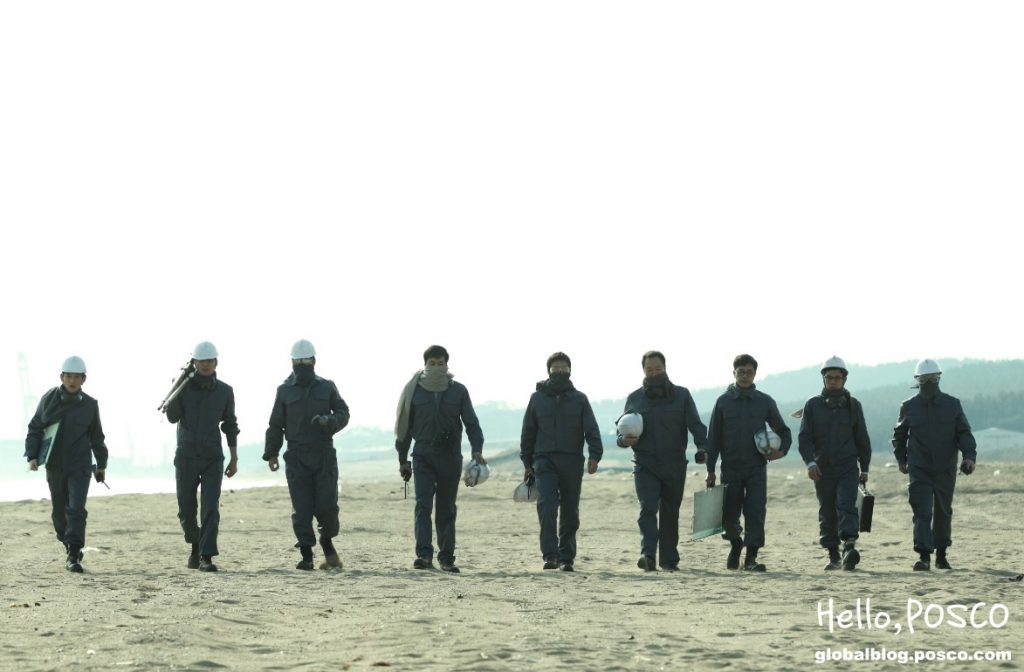 Pictured here: Scene from Into the Flames

Into the Flames portrays the success story of one individual, Taehyung Park, who contributes greatly to the Korean economy. The story begins in Japan where Taehyung Park grows up beneath poor parents. During high school, he befriends Daechul Shin while playing Judo. The two friends meet a Japanese girl named Kumiko and fall in love with her. With her help, the two boys find work at a local steel plant. It is here that Taehyung Park discovers the intrigue of the steel industry. 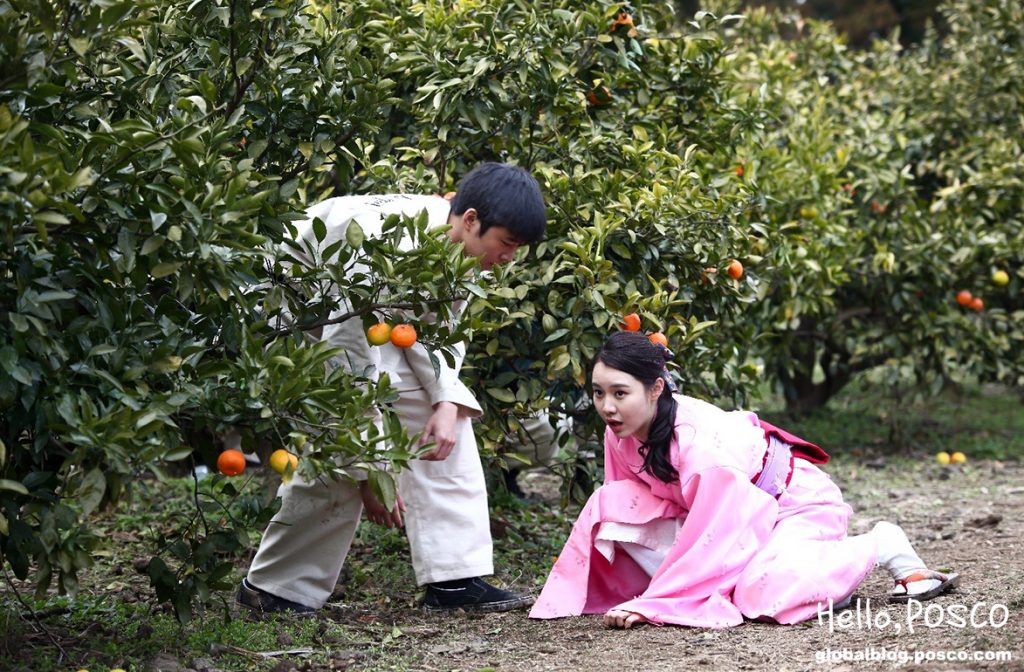 Pictured here: Scene from Into the Flames depicting Taehyung Park and Kumiko during his youth in Japan

Like all beloved Korean dramas, Into the Flames has its share of lost love, challenges and dramatic twists. From the looks of it, there might be a love triangle forming between Taehyung Park, Daechul Shin and Kumiko. We can’t wait! 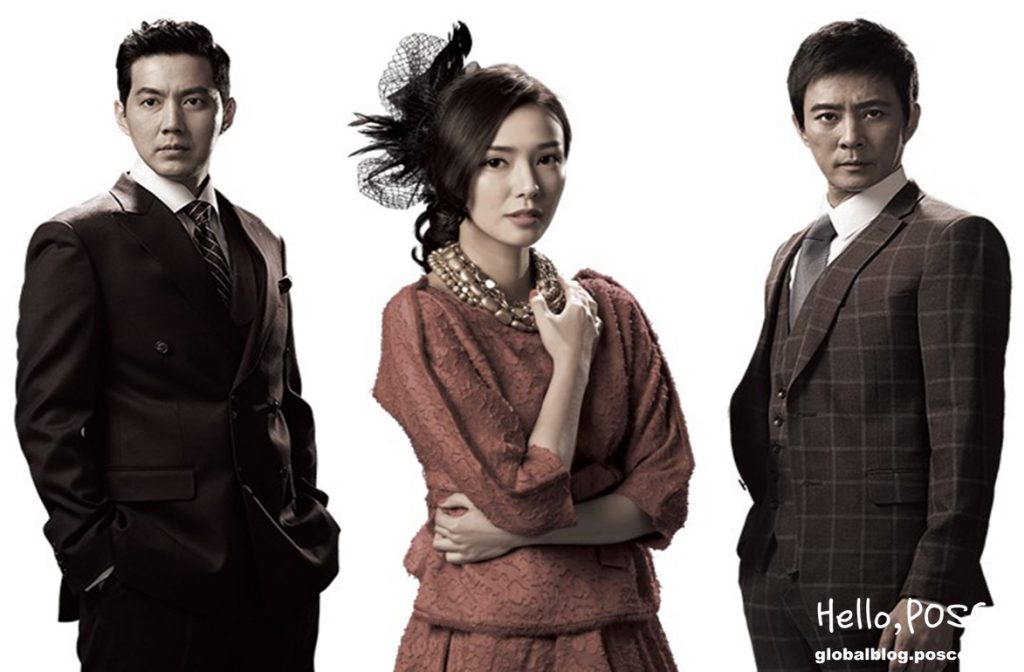 Pictured here: Daechul Shin (played by Jin Ryu), Kumiko (played by Taeyoung Sohn) and Taehyung Park (Played by Soojong Choi) are the main characters that star in Into the Flames

Later on in the story, the president of Korea sits down with Taehyung Park and proposes the idea of establishing a steel mill in Korea to rejuvenate the Korean economy. After deep contemplation, Taehyung Park charismatically says, “I will do it. I will try building a steel mill in this nation.” By overcoming hardships from the Japanese occupation and Korean War, he later establishes a steel mill which sets the stage for the beginning of POSCO. 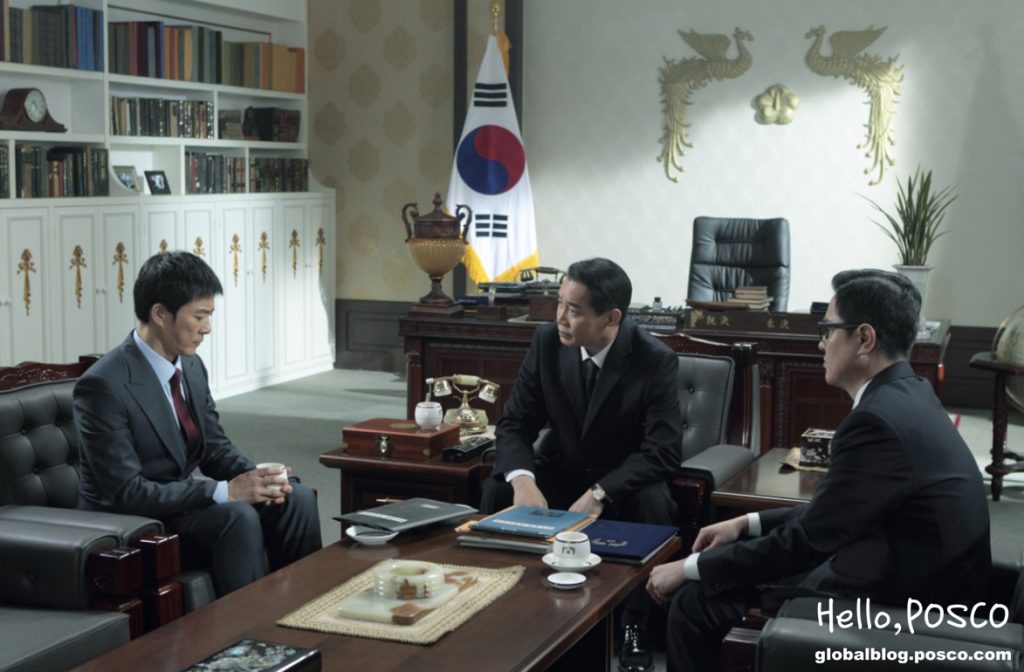 Pictured here: Scene from Into the Flames

Behind-the-Scenes of Into the Flames

To capture the essence of this rich history, drama sets were created to imitate scenes of Pohang as well as at the former Blue House (President’s home) in Gyeongsangbuk-do region of Korea.

Filming of the drama also involved very real action! The main character of the drama, Taehyung Park, played Judo during his youth. Therefore the young actors had to go through special training 3 to 4 times a week for an entire month in order to make the acting as real as possible. 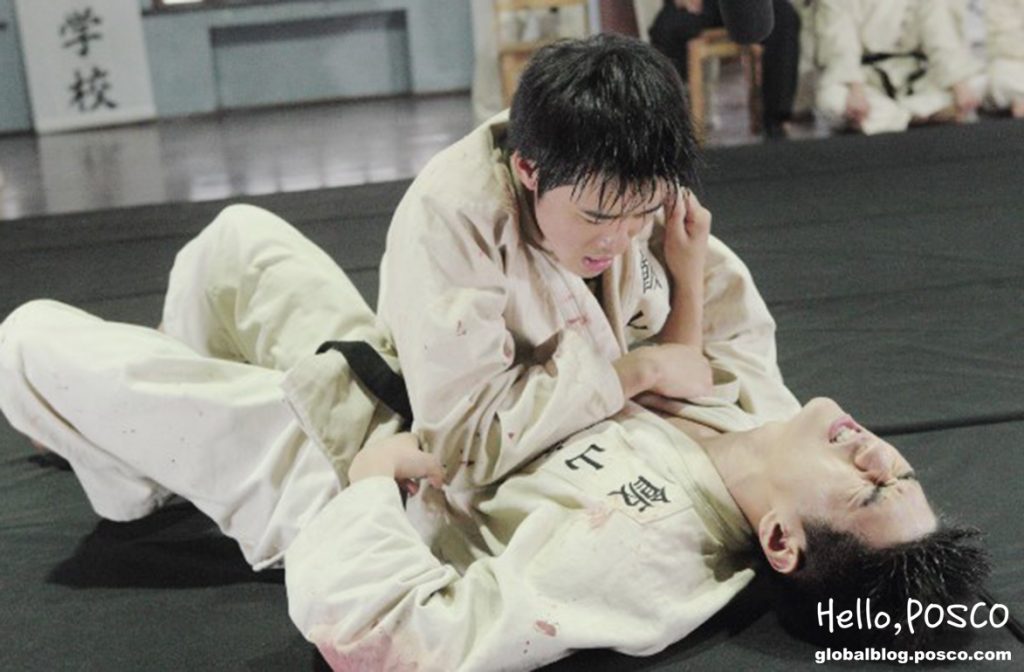 The drama was very action packed with car explosions and helicopter appearances. For the scene with the car explosion, the film crew had to use a crane to bring the car down the cliff. We can expect a very intense drama to unfold, right? 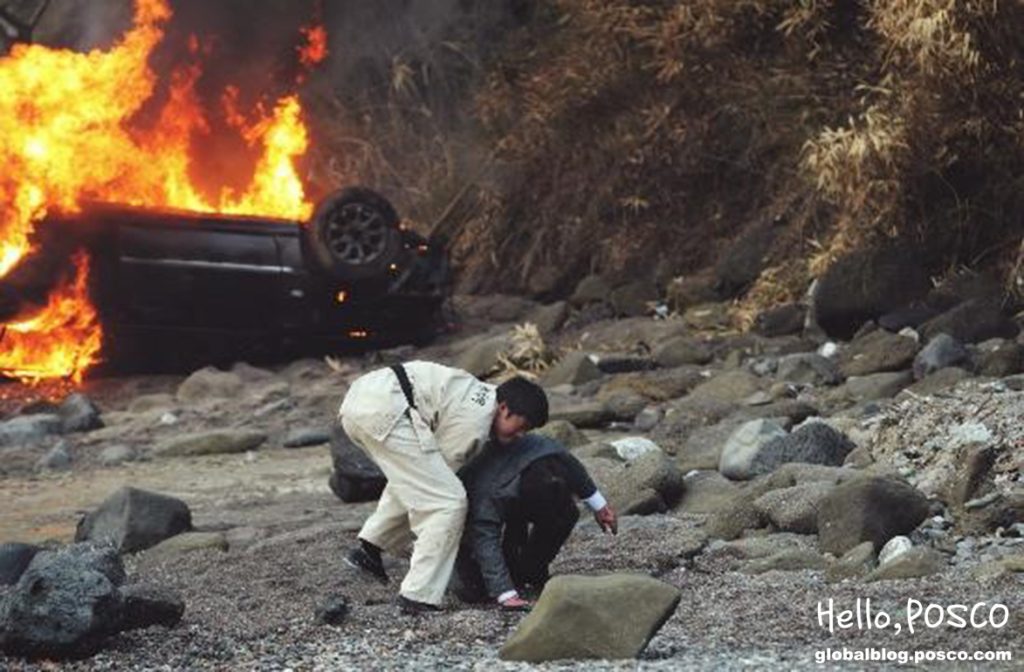 Pictured here: Car explosion during filming of Into the Flames 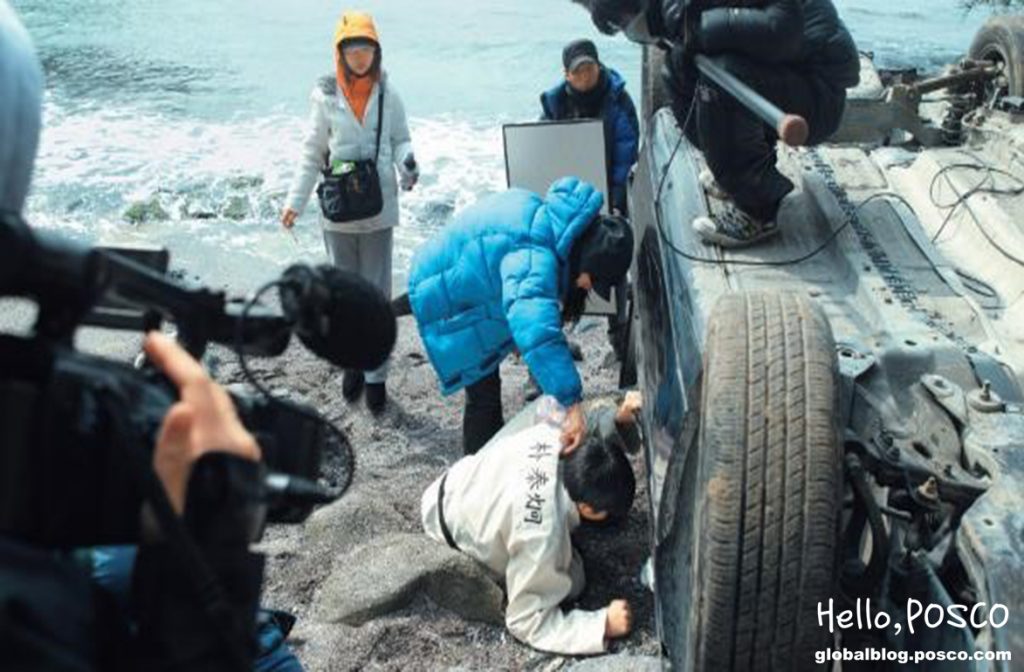 Pictured here: Car fallen from cliff during a scene from Into the Flames

Apparently the helicopter used during the filming is the same model as what Queen Elizabeth rides!  How exciting. We are curious about what role it plays in the drama episodes. 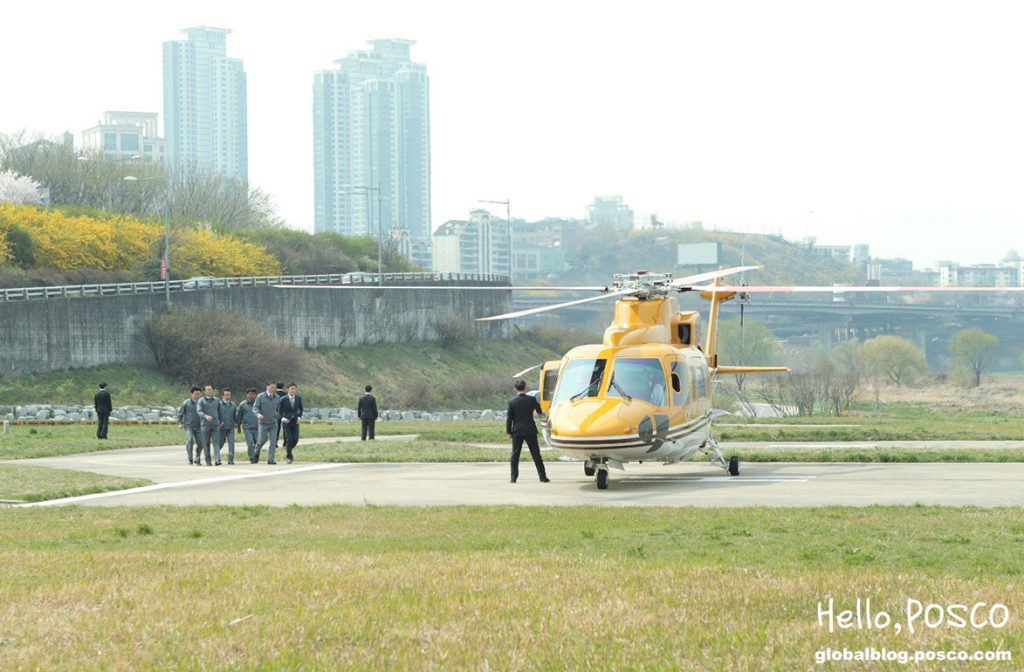 The first airing of the drama is set for April 25th! We hope you are as excited as we are. Let us know what you think!