POSCO joined hands with PT Krakatau Steel, Indonesia’s state-run steel company, and started construction of an annual 3 million ton scale integrated steelworks in Cilegon, Indonesia, in October of 2010.  Krakatau POSCO, the local subsidiary, is targeting completion of construction by the end of December, with construction progress currently at 98%. 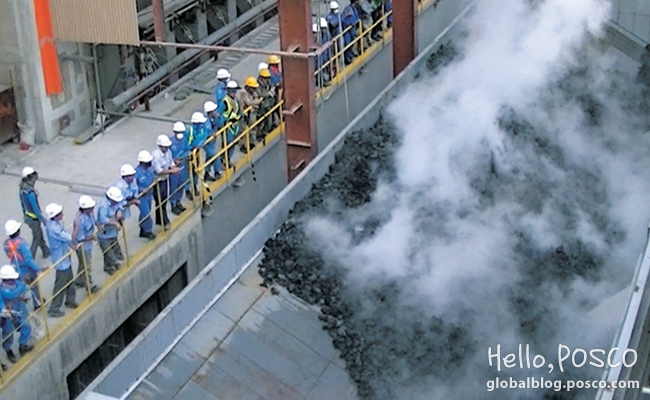 On the 7th, one day before the first coke was produced, Krakatau POSCO charged the first coal into the coke oven as the blower, the core facility of the coke making process, was operated.  Approximately 36 hours after coal was charged into the 58.9 ton coke oven, and at a temperature of 1150℃, carbonized coal was made into coke for the first time in Indonesia, on the 8th.

Fandi, who was in charge of driving the first charging car said, “I am happy and excited that Indonesia has produced its first coke.  The results of eagerly learning from the consultants dispatched from Korea can be seen in the outcome.  I am once again amazed by their will and feel thankful.”

Through the construction of the Krakatau POSCO integrated steelworks, POSCO plans to firm its position as a major global steel company and continue to prepare a stepping stone to enter the Southeast Asia market, which has high growth potential.