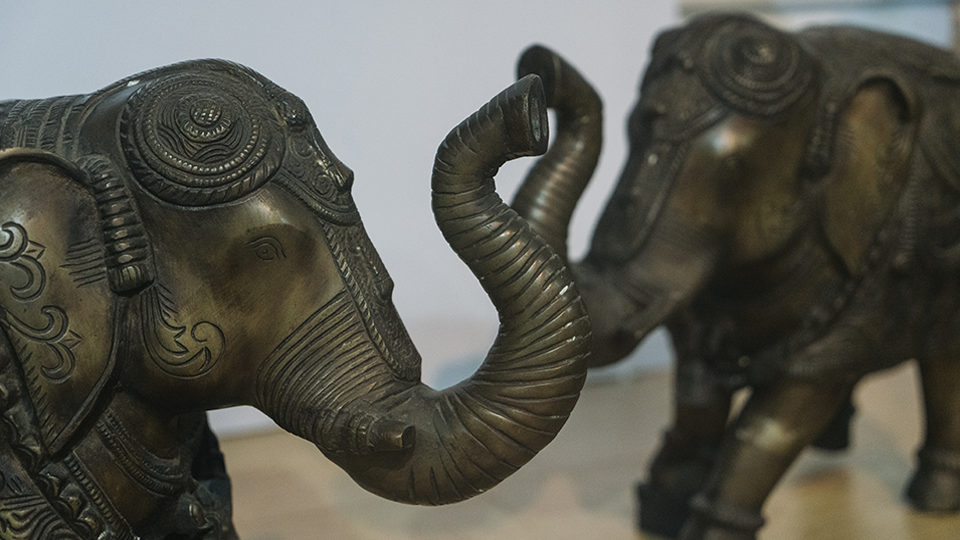 India, a polytheistic nation of 33 million gods, prides itself on its impressive body of artworks, which is as colorful and diverse as its religious tradition. India’s metal art, which developed alongside its religious art, deserves attention for its sheer variety and scale. While India’s Iron Age culture reached all the way to the Korean Peninsula, public awareness of the crafts is perhaps not as widely spread as its influence.

The Indian Art Museum located at the heart of the Gangnam area in Seoul, Korea, is one of the many institutions that aim to provide more opportunities for the public to learn about the exquisite craftsmanship of India’s metal art. The museum opened in the year 2000 and most pieces exhibited in the museum are from the personal collection of the museum director, Yang-Sik Kim. Kim has collected about 2,000 Indian artifacts for the past 40 years. 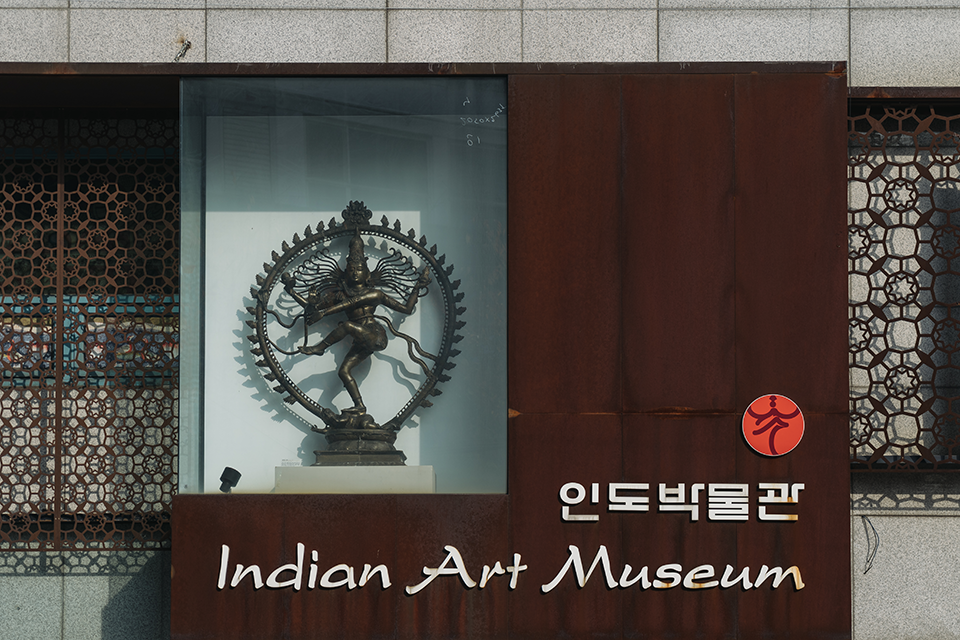 To celebrate its eighth year anniversary, the Indian Art Museum is currently holding a special exhibition on metal crafts. Stepping into the museum, murals, armoires and various handcrafts welcome the visitors. The murals lead the visitors up to the second floor where the museum’s permanent collection is on display through which visitors can get a glimpse of India’s history, religion, craftworks, musical instruments, and lifestyles. Special exhibitions of various themes such as paintings, crafts, and textile art are also located on the same floor.

In India, numerous artifacts such as terracotta seals, accessories, as well as ancient currencies are still being excavated from around the Indus Valley Civilization area. These relics are not just snapshots in school textbooks. Because of India’s deep connection to its religion, the relics are still making a profound impact on artistic communities, as more modern artisans actively employ ancient techniques in their work. In this exhibition, age-old techniques are reincarnated in the form of contemporary art.

India is the birthplace of four of the world’s major religions — Hinduism, Jainism, Buddhism, and Sikhism. As almost 80% of the Indian population identify themselves as Hindus, the 33 million gods in Hinduism naturally provided an atmosphere for creating many metal statues for worship.

At the Indian Art Museum in Seoul, there were also many metal deity figures on display. Krishna, a principal deity in Hinduism, wearing a turban with a feather on top, holds a quintessential bamboo pipe in his hand. Also on display is the goddess of wealth Lakshmi, the wife of Vishnu — Vishnu is one of the three gods responsible for creation, upkeep and destruction of the world.  Lakshmi is usually depicted as a beautiful woman of golden complexion, with four hands, sitting or standing on a full-bloomed lotus and holding a lotus bud.

A majority of Hindus have a shrine in their home where they can perform a prayer ritual called ‘Puja’, which is performed to receive blessings in this and the next life and ultimately reach the state of moksha, a concept similar to the Buddhist concept of nirvana. A Puja ritual is performed by burning incense and offering tribute to deity while chanting a prayer; and it involves items most of which are made of metal, such as lamps, spoons, kettles, and plates.

For the people of India, spirituality is simply a way of life. It’s easy to see why their metal crafts are deeply rooted in every aspect of their daily lives. 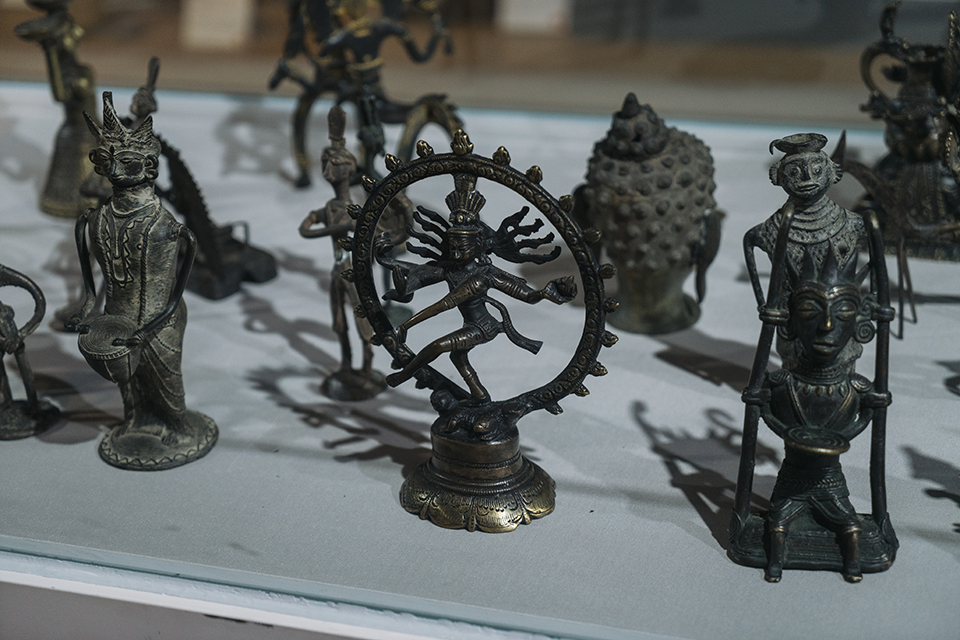 The most sacred part of the Puja ritual is the cleansing of the deity figure(s) as well as the waving of a burning lamp, and metal lamps of various shapes were created for this purpose. 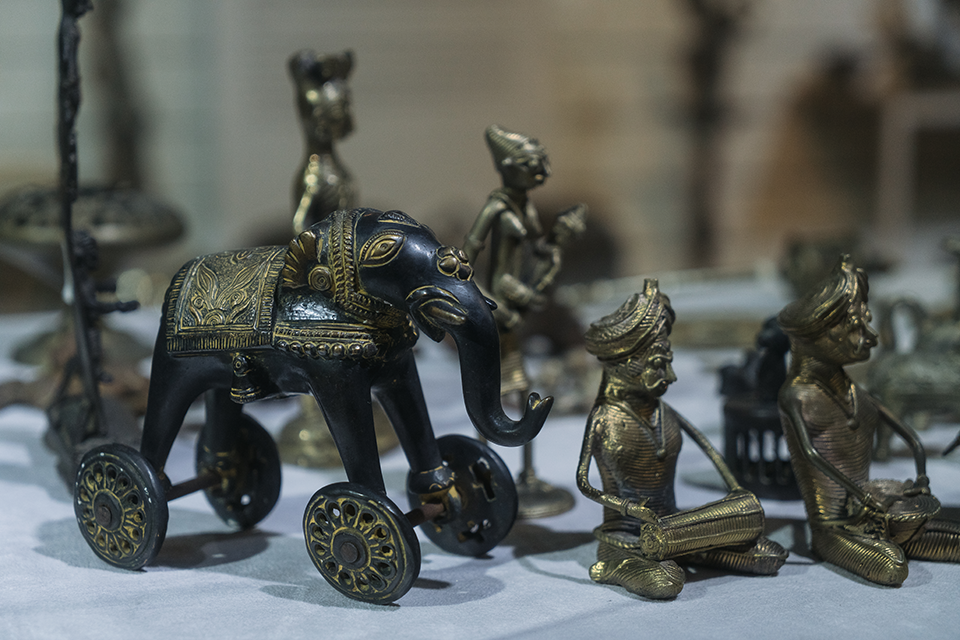 Indian metal crafts are known for using the Dhokra technique, which is the lost-wax casting technique that has been passed from generation to generation. The Dhokra is one of the earliest and most advanced methods of metal casting known to human civilization. Its roots can be traced back 5,000 years to the ancient city of Mohenjo-Daro in the Indus Valley Civilization.

To illustrate the Dhokra technique: a basic clay model in the shape of the final cast image is made, which is then covered with wax. The wax is then shaped and carved in finer designs and decorations. Then a layer of clay is applied to the object to create a mold, into which hot metal is poured once the clay is cooked. Simply put, the technique allows the metal to be molded in different forms using a clay mold. Most of the work exhibited in the museum were produced using the Dhokra technique.

Also on display is ‘Dancing Girl’ of Mohenjo-Daro, the oldest metal-work known to date, which was also made using the Dhokra method. The Dhokra technique had spread widely to other countries including Malaysia, Egypt, China, and Korea.

The evidence that India’s Iron Age culture reached all the way to the Korean Peninsula can be found in the tale of King Suro (born in 42 A.D.) and Queen Heo, a princess from India, of Korea’s ancient kingdom of Kaya. This interracial marriage, which was quite uncommon at the time, indicates that Kaya was actively engaged in overseas relations; and it is speculated that the Iron Age culture of India that was introduced to Kaya at the time played a crucial role in strengthening Kaya’s sovereignty.

┃Why the Love of Metal Accessories? 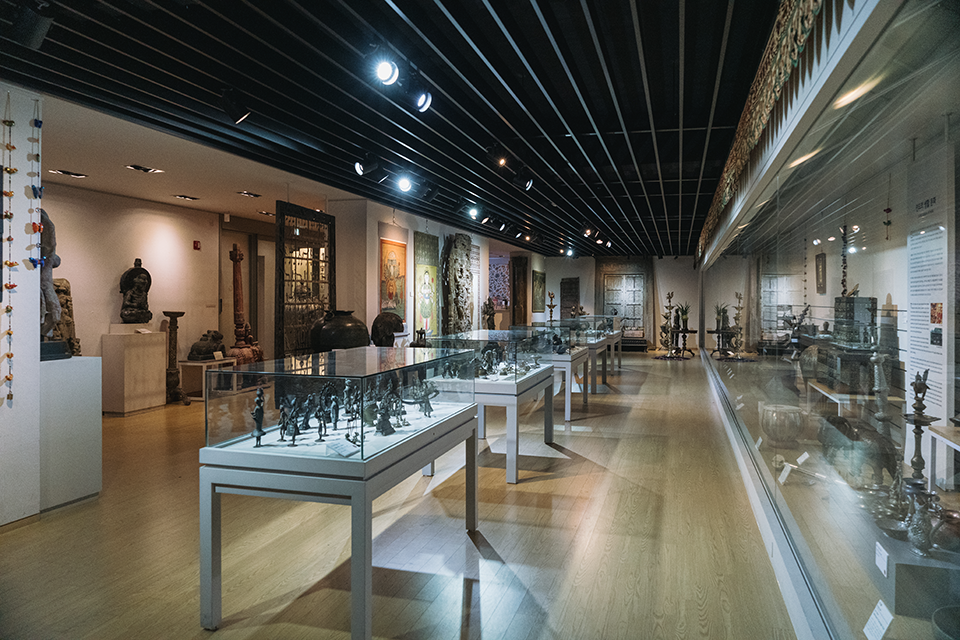 India’s state-of-the-art metal craft can be partially attributed to their rich mineral resources. The craft was used to create everyday objects as well as accessories. In India, men and women of all ages love to accessorize. In the Indian Art Museum especially, accessories were one of the most-visited exhibitions. Accessories can be made from any source but gold and silver were most favored. At first, visitors may be drawn towards the colorful details of the accessories. After looking at them more carefully, the visitors can really appreciate the high level of craftsmanship and the amount of effort it took to create them.

India’s long love affair with their accessories is well-known. They believe gold earrings can help chase away diseases for children. Indian women wear metals both for decoration, but also for health — they think metals help boost metabolism. That’s why so many Indian women are seen wearing metal accessories, from head to toe. 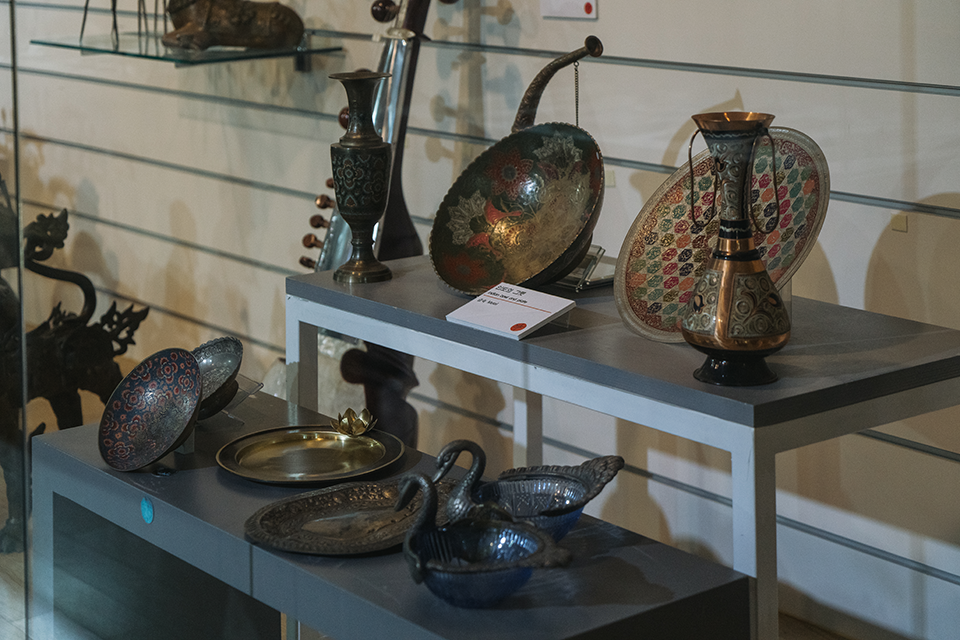 In addition to accessories, metal crafts were also used to create many household items in India. Unlike Europe or Middle Eastern countries where glass and ceramics are more commonly used, many Indian people use metals to make everyday objects. The household items exhibited at the museum display exceptional craftsmanship, with vibrant colors and ornate patterns.

One of the most commonplace household items made of metal is a water pot. Usually made of bronze, copper, or metal, big water pots have a spout and a flat surface. Kettles and other containers used for cleansing and praying rituals come in many different shapes and sizes.

Indians also love to accessorize architectural elements like doors and windows. This type of metal decoration often embodies human or animal figures, which are believed to protect houses from animal attacks. It also signifies wealth.

Even though the scale of the exhibition is relatively modest, the Indian Art Museum provides a great introduction to both the past and the present of India’s metal art scene. For Seoulians at least, being able to experience all this right from their city is an added bonus. Together with metal crafts, visitors can also get a glimpse of India’s textile crafts, with unique dying techniques and beautiful embroidery patterns. Furthermore, the museum is also running hands-on activity programs like, making handkerchiefs traditional embroideries or getting henna tattoos.