[How Do You Like POSCO?] The Story at POSCO Thainox, Thailand

*This footage was taken before the outbreak of COVID-19.

In the first series of ‘How Do You Like POSCO?’ POSCO Newsroom sat down with the employees of PT.KRAKATAU POSCO in Indonesia. This time, the newsroom headed to Thailand to meet the special guests of today. Thailand is known to be the largest automobile market in Southeast Asia and one of the world’s Top 10 automobile manufacturers.

Among the three manufacturing subsidiaries that POSCO operates in Thailand, POSCO-Thailand PC(Processing Center) is the oldest. Launched in 1997, POSCO-Thailand PC is still under operation and supplies automobile and home appliance steel products. In 2011, POSCO acquired Thainox, the sole stainless rolling mill in Thailand, to expand the product range. POSCO ventured further by establishing POSCO-TCS in 2016 to meet the demands of global automobile steel products. POSCO-TCS manufactures premium galvanized steel for automobiles.

All three subsidiaries sit in ‘Rayong,’ Thailand’s largest industrial complex located 170 km away from the capital, Bangkok. POSCO Newsroom met with four employees of POSCO-Thainox online and got a chance to hear their stories. 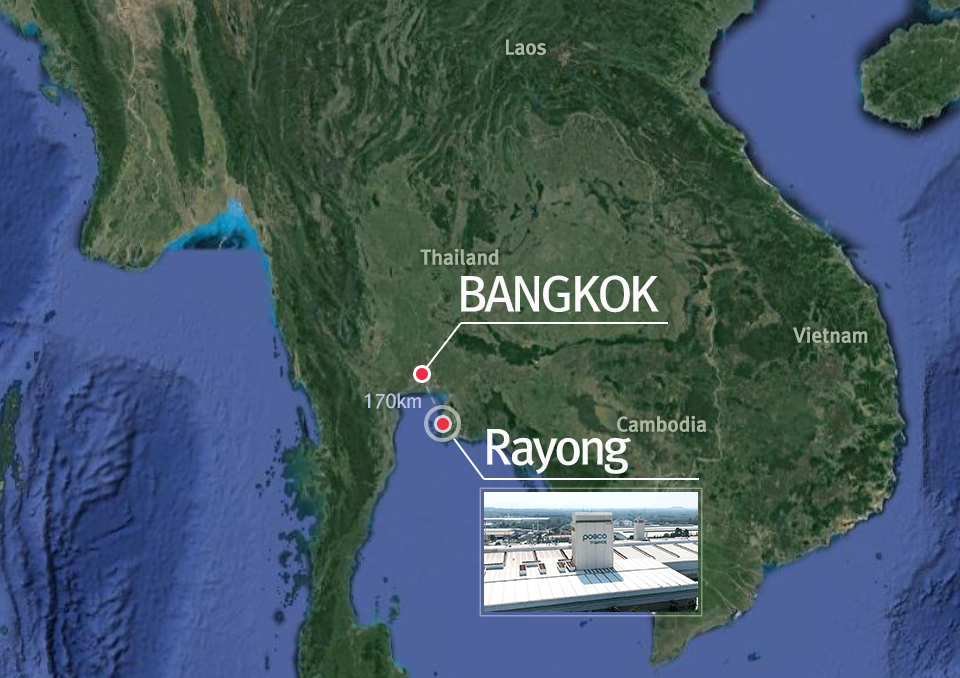 Q1. Tell us briefly about yourself and how you became to join POSCO-Thainox. 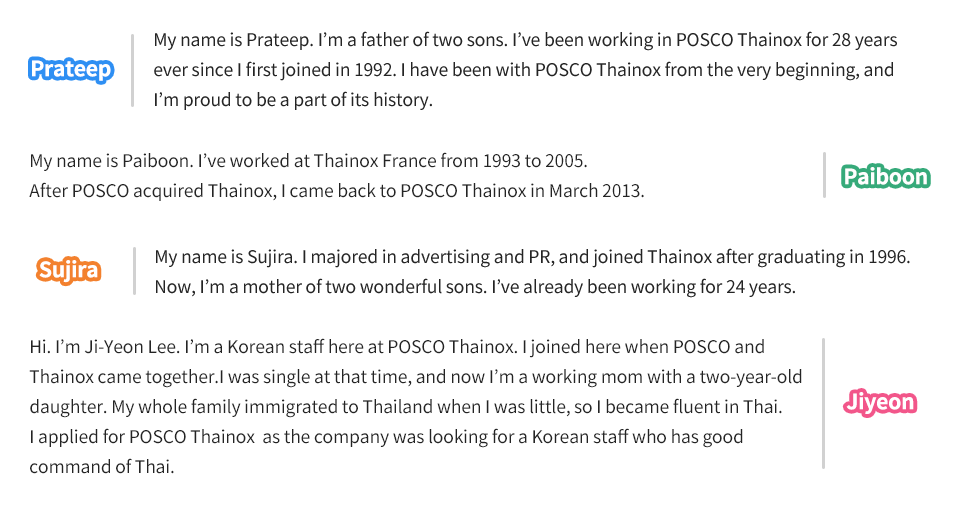 Q2. Tell us about your job in detail. 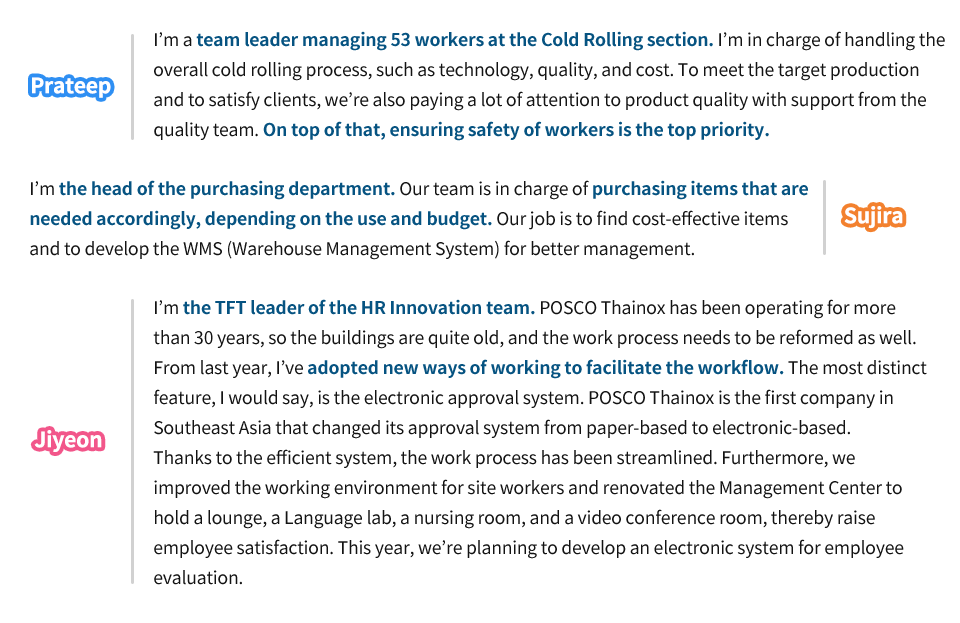 Q3. How do people around you react when you tell them you work at POSCO-Thainox?

■ “Growing Together with the Best Colleagues”

Q4. What makes POSCO-Thainox special compared to other local companies? 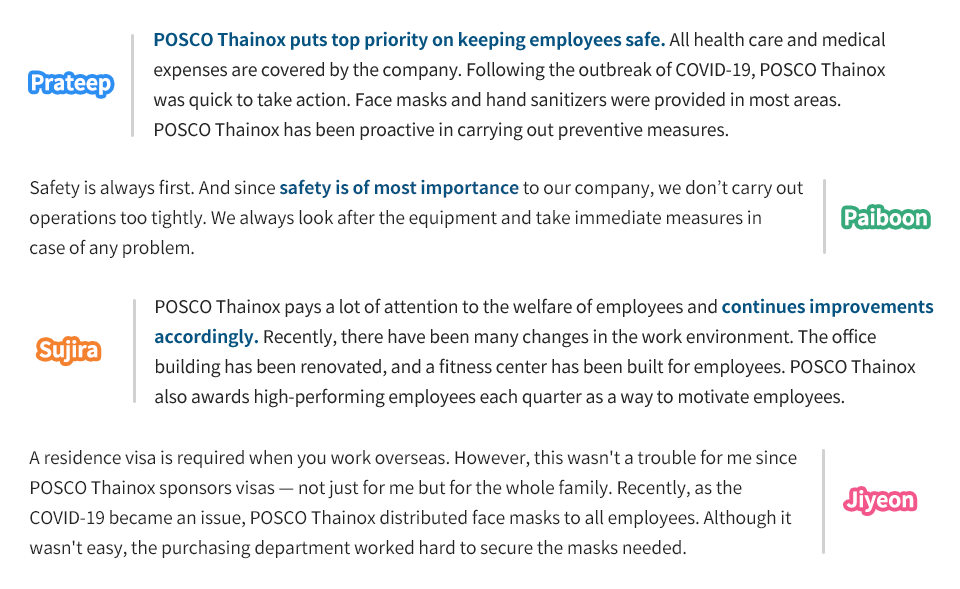 Q5. How are your Korean colleagues? How do you get along with the local employees? 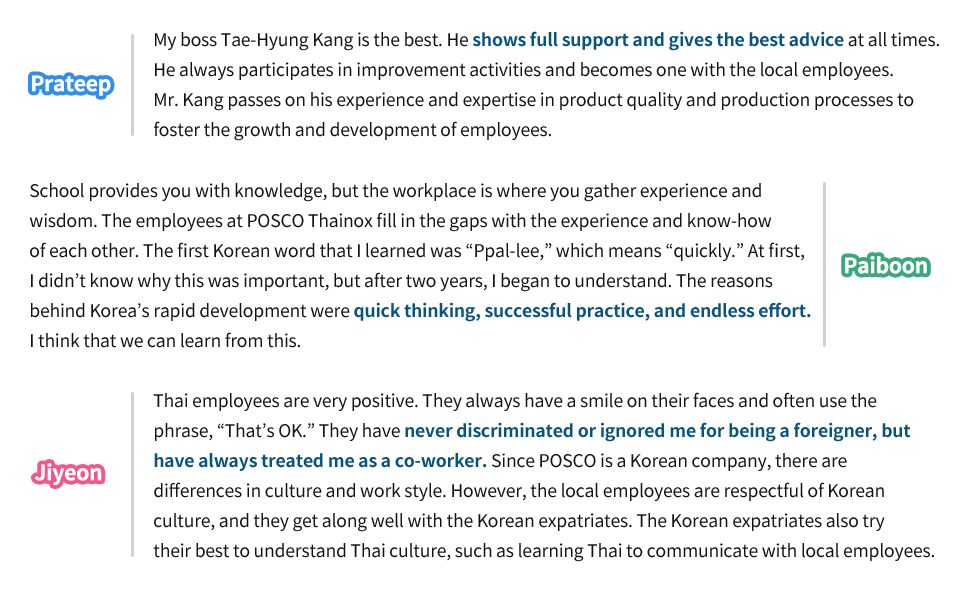 Ever since POSCO and Thainox came together in 2011, POSCO-Thainox has grown into Thailand’s No.1 stainless steel plate producer. POSCO Newsroom hopes the four employees here — along with the 568 employees working at POSCO-Thainox — will grow with POSCO and become the leaders of tomorrow. At the end of the interview, Paiboon, Prateep, Sujira, and Ji-Yeon expressed their hopes for the company.