“Have you Ever Built a House for a Superstar? I Have!”

The giant penguin Pengsoo is the character Koreans are in love with these days. Pengsoo, a trainee of EBS — the education broadcasting system — is a 10-year-old penguin from the Antarctic. It made its way to Korea in dreams of becoming the world’s no.1 content creator. And this dream doesn’t seem that far since Pengsoo truly is a sensation and is dashing its way to stardom — it’s even appeared on BBC News.

POSCO got to meet with this superstar and decided to build the one and only ‘Pengsoo House’ using POSCO’s premium steel products for construction. Let’s take a look at this behind-the-scenes story below, written by Pengsoo’s huge fan, POSCO assistant manager Choi.

My Special Story — I Love Pengsoo! 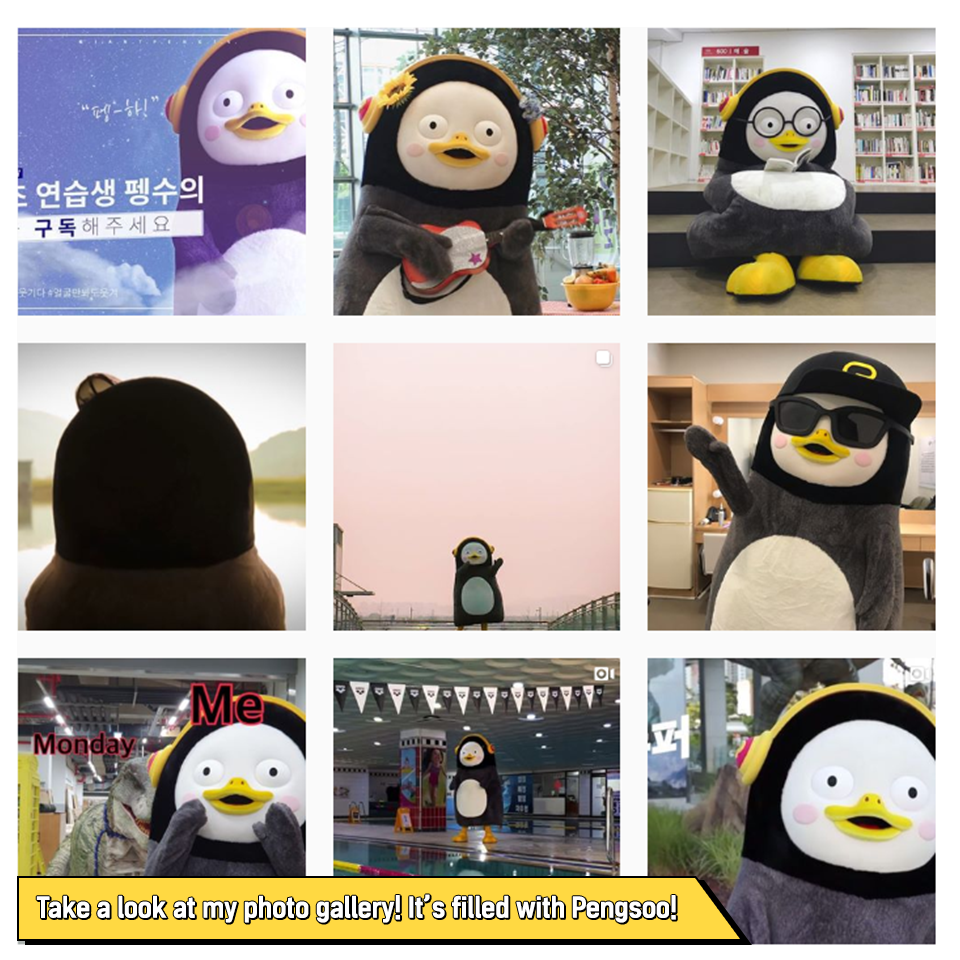 First of all, I would like to thank all POSCO and EBS staff for giving me a chance to be a part of this project. It’s just like a dream come true for me! Let me tell you my dramatic story.

I’m Deuk-Yong Choi working at the POSCO Construction Steel Materials Marketing Office. I joined the company in 2014 and have been working here for six years. I saw Pengsoo for the first time when its video turned up as a recommended video on YouTube. I didn’t know then that I would become such a huge fan. After watching one episode, I was totally into it — watching episode after episode. Even now, I squeeze in time to watch Pengsoo’s video during lunch break or before going to bed. If someone asks me why I keep watching it, I answer, “Just watch one and you’ll know.”

Pengsoo’s charms? Where do I even begin? I put on a smile and get comforted by just looking at Pengsoo. Pengsoo made me do things that I’ve never done before. My desk at the office looked so much better after I covered it with photos of Pengsoo!

One day, the company Communication Office gave me a call. It was the most surprising call I’ve ever got at work. “Mr. Choi, could you build Pengsoo a house using INNOVILT?”

At the time, I was busy preparing for the launch of INNOVILT — POSCO’s premium brand of construction material. Meanwhile, the Communication Office was working on a project to build a house for Pengsoo. They said that it was harder than expected since they wanted to display Pengsoo’s picture on the outer wall of the house. Actually, Pengsoo lived in a small prop room which was sad for me to watch. And now I was given the opportunity to change that!

I could build an igloo for Pengsoo since it’s from the Antarctic, but I wanted to make a house made of the best steel possible. I hurried to the EBS headquarters to meet Pengsoo. Seeing Pengsoo asleep in its space — the prop room — I became so excited about this project.

The Story Behind Pengsoo House

My team worked together for a few days to handpick and design the best products for building Pengsoo House.

The design was revised over several times so that all the four sides of the house could display the photos of Pengsoo well. Pengsoo is 210cm tall, so to fit Pengsoo in, the house had to be built five meters high. For this task, ‘PosMAC’ was considered suitable to build the structural frames, and ‘PosART’ — a steel plate where Pengsoo’s picture could be printed — was selected for the exterior. Both products are currently awaiting evaluation to become INNOVILT products.

Now, let me give you a little explanation regarding the details of Pengsoo House.

PosMAC Stud was adopted as the frame for Pengsoo House. PosMAC is normally called ‘rust-free steel’ in POSCO. PosMAC processed into ┌┐shape is PosMAC Stud, and when these┌┐shaped pillars are weaved together, they enable Pengsoo House to become much stronger. Compared to other materials, PosMAC is more resistant to earthquakes and fires. It is also distinctively space-efficient, making it a perfect choice for GIANT Pengsoo House. 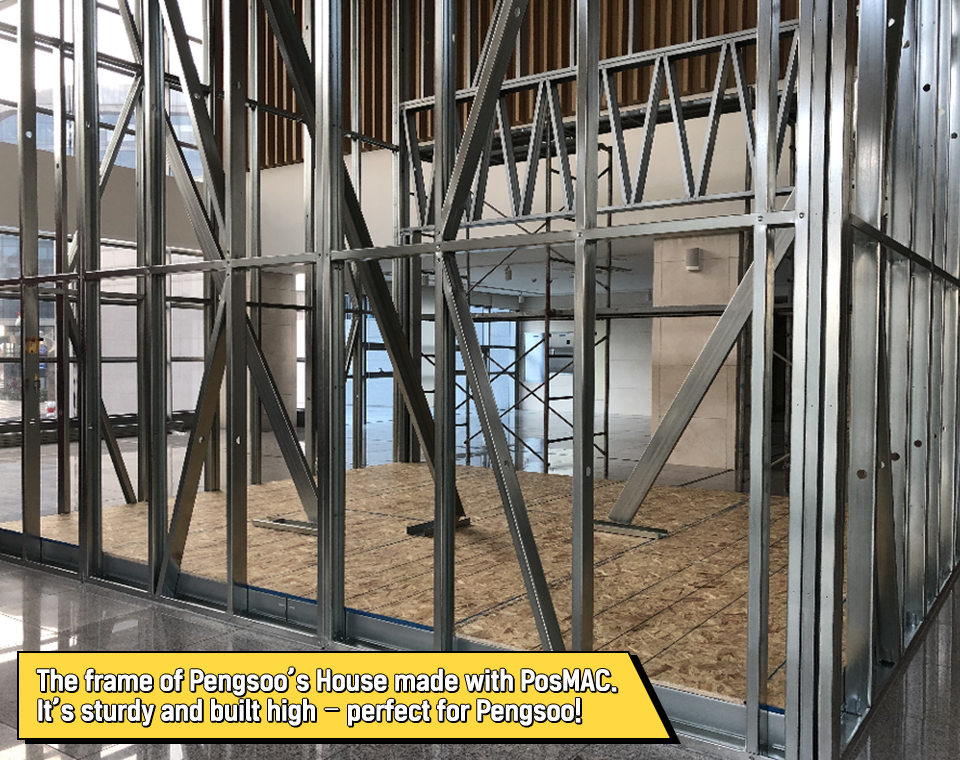 Next, the interior and exterior materials — the highlight of Pengsoo House! The exterior needed a photo of Pengsoo and the interior was to be colored with yellow, the signature color of Pengsoo. Most of all, we needed a technology that could display Pengsoo’s photograph in real life high-resolution and fortunately, PosART made this possible. With PosART, I could make a Pengsoo face panel as seen below.

Pengsoo House is in the lobby of EBS headquarters. I took several trips there and kept working on PosART day and night, worried the quality might not come out as planned. After spending a whole weekend, finally, I could get to work on the exterior wall with PosART printed with Pengsoo’s picture.

2 December 2019. A day I will never forget. It’s the day I showed Pengsoo its house for the first time. Pengsoo visited the site while we were working on the exterior wall. Pengsoo came wearing a giant safety helmet and it was so cute! Pengsoo checked out the house and shook it to see if it was strong enough and — Wow! My heart was trembling, not the building. Pengsoo even gave me a massage on my shoulders. The moment Pengsoo touched my shoulders, I almost melted. ⋛⋋(・ꃪ・)⋌⋚

After Pengsoo House was complete, Pengsoo threw a housewarming party, and other EBS characters came to visit. Everything felt surreal. Watching Pengsoo look so happy, I thought maybe this was why I’d entered POSCO.

I believe that everyone is special. And although Pengsoo is a trainee who hasn’t even made a debut, it still deserves a nice house to live in.

Pengsoo is my lifetime friend, and steel is my job for life. I’d built a house for my lifetime friend with steel that I sell! What a story! All my coworkers envied me when they heard my story. This is truly a memory I’d cherish my whole life. I want to thank POSCO for giving full support and making this happen.

To see the whole footage of Pengsoo House and the housewarming party, check out the following videos (Korean).