In the era of net-zero carbon, the steel industry faces a big challenge. Externally, the demand by the market and customers for low-carbon products is increasing every year amid the crisis of global warming, while the development of new technologies and large facility investments are required internally to reduce the carbon generated in the steelmaking process. Steelmaking processes that have been used for decades should be converted to a low-carbon system from equipment to technology and materials, so it is not an exaggeration to say that the “survival” of steel companies depends on net-zero carbon.

In the series on the “Great Conversion to Low-carbon Eco-friendly Steelmaking Process,” we will take a look at the methods of executing net-zero carbon POSCO is promoting to achieve the goal of “net-zero carbon 2050,” such as the development of hydrogen reduction steelmaking, expansion of renewable energy, and CCS, to find a way to “survive.”

As global credit ratings and investment agencies reflect corporate climate change response efforts as an important factor in ESG management evaluation, the importance of green energy with little or no carbon emission in the power production process is increasing.

More companies are participating in the RE100 (Renewable Energy 100%) campaign to cover 100% of the power used by companies with renewable energy and the number of RE100 campaign participating companies has reached 371 worldwide as of May this year. Renewable energy generation recognized by the RE100 campaign includes wind power, solar power, geothermal power, biomass power, and hydroelectric power. Research and development are also underway in many countries around the world for power generation technologies that reduce carbon emissions by using carbon-free fuels such as hydrogen and ammonia. In the EU, there is an active discussion on whether nuclear power and natural gas should be included in the Taxonomy, a classification list of economic activities necessary for reducing greenhouse gas and achieving carbon neutrality.

If a low-carbon eco-friendly steelmaking process is introduced in the future, can the electricity used for steel production be converted into green energy? To check the possibility, we will first look at the current status of power use at the steel works, the structure of power generation required, and the prospect of future power use, and then look at POSCO’s tasks and efforts for the green energy conversion.

l Current status of power use at the steel works

How much electricity does steel production take? POSCO used about 25 TWh (terawatt hour) of electricity at Pohang and Gwangyang steel works in 2021, which is equivalent to the amount of power generated by the three nuclear reactors combined. Considering that Korea’s renewable energy generation in 2021 is 39.1 TWh according to the Korea Electric Power Corporation’s report 2021, the amount of electricity consumed by POSCO Steel works in a year accounts for about two-thirds of Korea’s annual renewable energy generation. 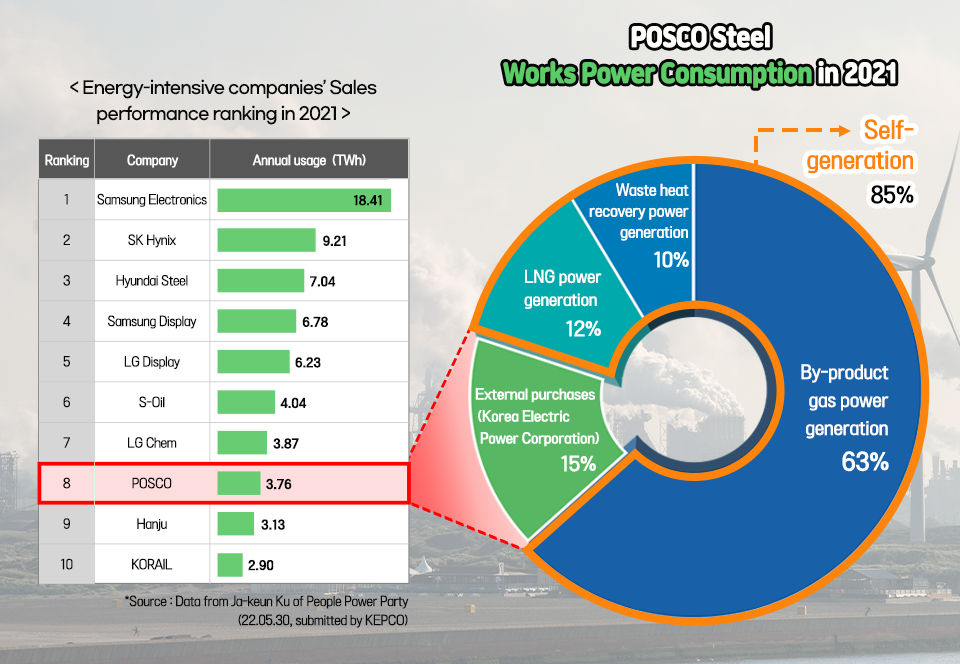 However, looking at KEPCO’s ‘Energy-intensive companies’ Sales performance ranking in 2021’, the amount of electricity that POSCO purchased through KEPCO was only 3.8 TWh, not 25 TWh. The reason why there is such a difference between KEPCO’s sales volume and POSCO’s actual power consumption is that most of the electricity is supplied by the steel works through self-generation.

The power generation structure of POSCO Works is designed based on the traditional blast furnace operation process.

Steel works use by-product gas generated during the steelmaking process as the main power source, which accounts for 63% of the total power consumption. By-product gas is emitted from facilities such as a coke oven that processes coal to fit into a blast furnace, a blast furnace and FINEX that produces molten iron by melting coal and iron ore, and a circuit for refining molten iron and contains components such as methane (CH4 ) and carbon monoxide (CO). The steel works collect all of this by-product gas and use it again for the steelmaking process, or move it to a power generation facility inside the steel works and turn a steam turbine to generate electricity on its own.

Along with the supply of self-generation, insufficient power is purchased from KEPCO, and sold to KEPCO when power remains. The Gwangyang Works actually transmitted unused power to KEPCO in 2020. In other words, the steel works can be said to be a huge power plant based on the steelmaking process.

However, if the proportion of blast furnace operation is reduced to achieve carbon neutrality and the steelmaking process is centered on electric furnaces and hydrogen reduction steelmaking, the proportion of self-generation using by-product gas as an energy source will also decrease. On the other hand, the total power consumption of the steel works is expected to increase as facilities that use relatively more power than before, such as a fluidized reduction furnace for hydrogen reduction steelmaking increase. 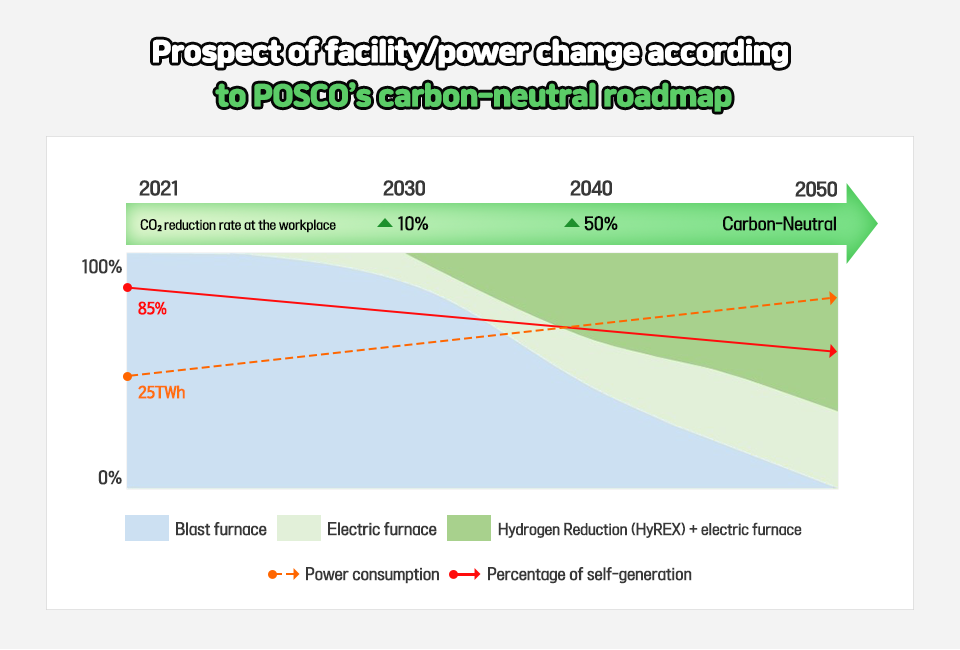 In other words, steel works have stably solved most of the power required by self-generation in the past, but in the future, as the proportion of self-generation decreases and power consumption increases, the importance of a stable green energy supply without carbon emission will be highlighted in the power generation process.

Last year, ArcelorMittal, a multinational steel manufacturing corporation, announced a plan to build a 2GW-class Offshore Wind Park in the Netherlands in cooperation with Orsted, and Baowu Clean Energy, a subsidiary of China Baowu Steel Group, started a 150MW wind power plant in Sanmenxia, a western Henan province. In the same month, Tata Power, a subsidiary of India’s TaTa Group, announced a plan to invest in solar power generation with an annual capacity of 2GW for 10 years.

1) Green premium is a method in which a company purchases renewable energy by paying a green premium fee which is separate from the existing electricity charges to KEPCO, and KEPCO opens a bidding market once at the beginning of the year.

2) REC purchase is to purchase Renewable Energy Certificates through the trading platform of the Korea Energy Agency, and it can be purchased at any time twice a month. REC is exchanged to the certificate of use at the Korea Energy Agency and provided to customer companies. The amount of electricity used will vary depending on the type of steel product. However, if 50MWh of electricity is used to produce 100 tons, 1MWh corresponds to 1REC in the case of solar power generation, and 50RECs has to be purchased and provided to customer companies. As of December of 2021, the market price of 1REC is about 40,000 won, and 100 tons of RE100 products will cost about 2 million won additionally.

However, is it possible to stably supply green energy only with renewable energy? The fundamental reason that stable electricity supply and demand is important from the position of the steel industry is that steel works operate 24 hours a day. However, renewable energy generation, which can supply power only under limited conditions, has some limitations in stably supplying power to steel works that operates non-stop for 24 hours. 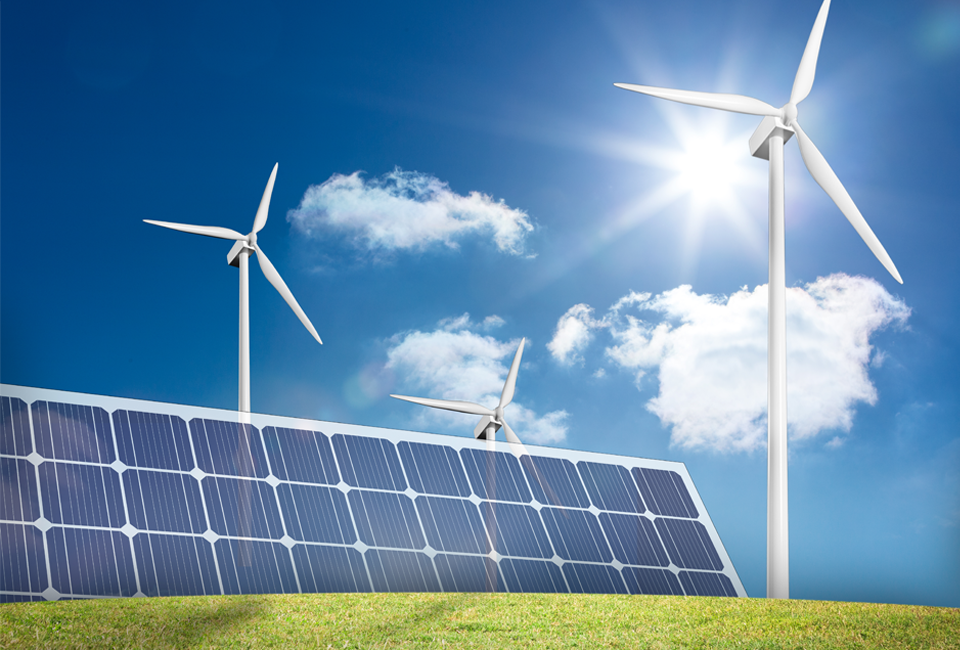 In the case of solar power generation, Korea can generate power only for an average of 3.2 hours per day due to the geopolitical nature. In particular, unlike countries located near the equator, if the amount of sunlight is not constant and the sun does not shine for a long time due to bad weather such as the rainy season or typhoon, there is a risk of unstable power supply and demand.

In the case of wind power generation, the industry assesses that in general, economic power generation is possible only when a wind of 7 m/s or more rises. However, in Korea, where there are many mountain ranges, the blowing wind is often blocked, and unlike the European North Sea or inland regions in Asia where there are no typhoons, the southwest sea, which is the main movement path of typhoons, is unstable because there is a risk of blade damage because of strong winds.

The revised bill of the ‘Act on the Promotion of Hydrogen Economy and Hydrogen Safety Management’ (Hydrogen Act), which was passed by the National Assembly plenary session last month and is scheduled to be implemented in December of this year, includes hydrogen gas turbine power generation, which produces electricity by directly burning hydrogen as a power generation fuel by breaking away from the existing method of utilizing hydrogen in the power generation sector through fuel cells at the time of hydrogen power generation.

From the position of the steel industry, hydrogen is an essential fuel not only for electricity production but also for steel production. This is because hydrogen is used as a reducing agent to reduce iron ore instead of coal in hydrogen-reduced steel, a future steel technology that does not generate carbon. 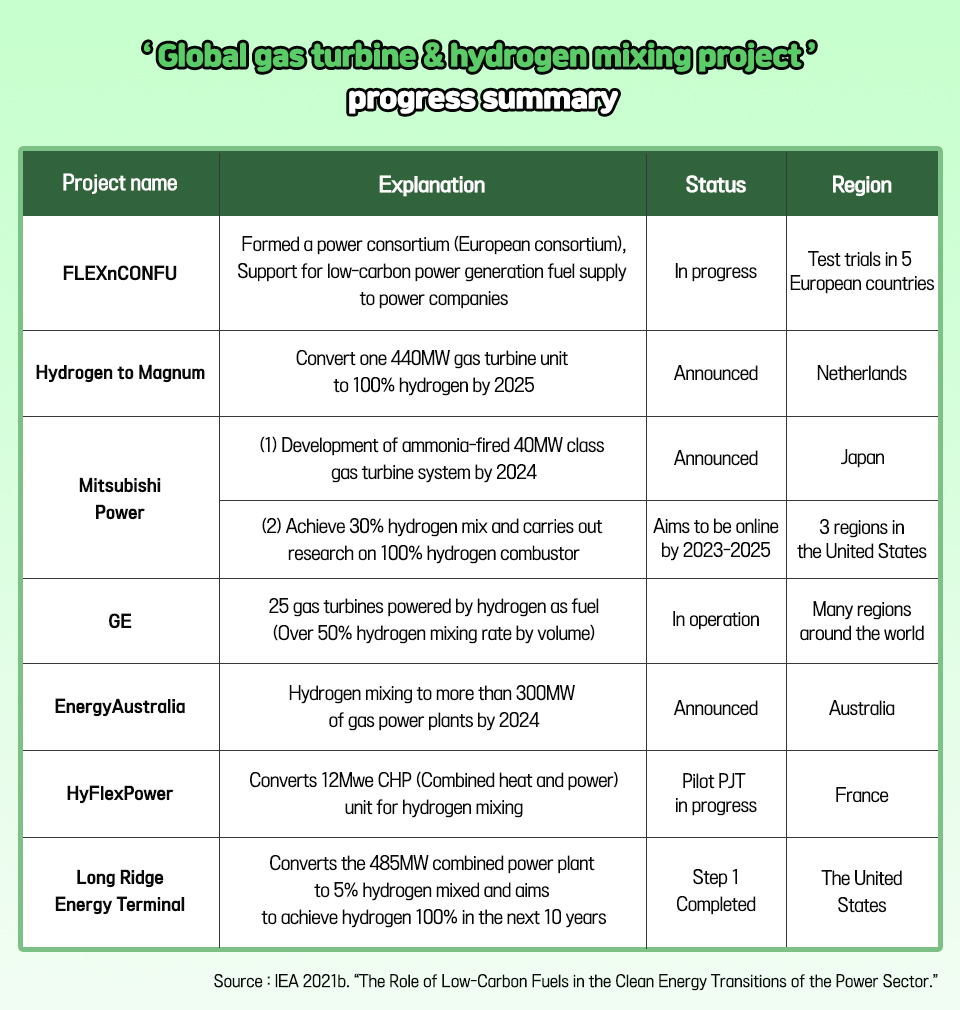 Meanwhile, POSCO Group and KEPCO signed an ‘MOU on the Establishment of a Partnership for Hydrogen · Ammonia business on May 29, and agreed to promote cooperation in three areas including ▲ joint development and investment in domestic and overseas green and blue hydrogen production projects, ▲ supply exchange (SWAP) for securing flexible supply of hydrogen · ammonia, ▲ mixed fuel power generation of hydrogen · ammonia and CCUS (carbon capture/utilization/storage) technology development. 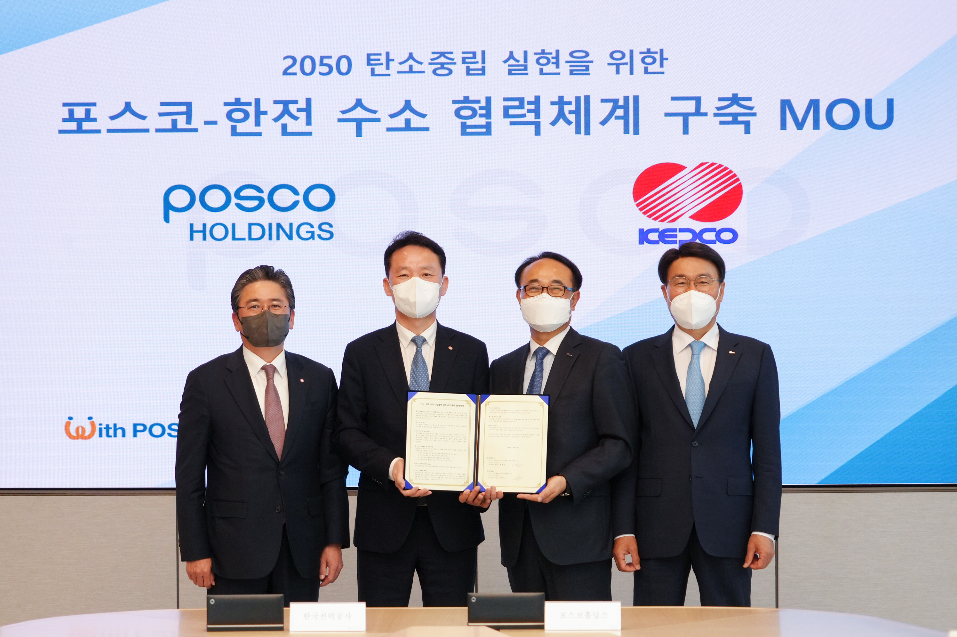 POSCO Group expects that it will become the most significant hydrogen demand in Korea thanks to POSCO’s HyREX(hydrogen reduction) and POSCO Energy’s power generation business. Also, POSCO plans to establish a hydrogen business model that actively links external sales based on stable internal demand. It aims to achieve annual sales of 2.3 trillion won and 500,000 tons of production by investing 10 trillion won in the hydrogen business by 2030. Afterward, the company plans to supply hydrogen to large-scale B2B demand sources such as steel, fuel cells, power plants, and charging stations at domestic and foreign by gradually expanding its production capacity to 3 million tons in 2040 and 7 million tons in 2050.