2021/03/16
‘Eco-friendly’ would be a milestone that all — from individuals to corporates — encounter. POSCO’s GPS (Green POSCO Solution) is also on its way towards a greener future. POSCO Newsroom presents a special series in the name of GPS, covering the story of how POSCO is leading our daily lives to become more eco-friendly.

The “Green New Deal” is what’s getting Greenie’s attention these days. The Green New Deal is about promoting sustainable development and converting energy policies centered on fossil fuel to new and renewable energy. This is something that Greenie, the protector of the environment, can’t overlook, right?

Among the many acts of the Green New Deal, wind power is in the limelight not only in Korea but also worldwide. Greenie remembers seeing from an airplane giant wind turbines standing by the beach. Today, we are going to learn about offshore wind power and POSCO’s solution behind it.

l Offshore Wind Power: The Trend For Now & The Future

Let’s see. According to the Global Wind Energy Council report, the global wind power market has grown significantly at an annual average of 24% since 2013. New installations in 2019 recorded 60.4GW. How is it going to be in the future, then? In 2024, annual installation is forecasted to be 73.4GW, and the noticeable part is that the percentage of offshore wind power is expected to increase significantly by more than 25%. Offshore has more constant and stronger winds than inland, and there are no issues regarding sunlight and noise. Hence, the popularity of offshore wind power is on the rise. 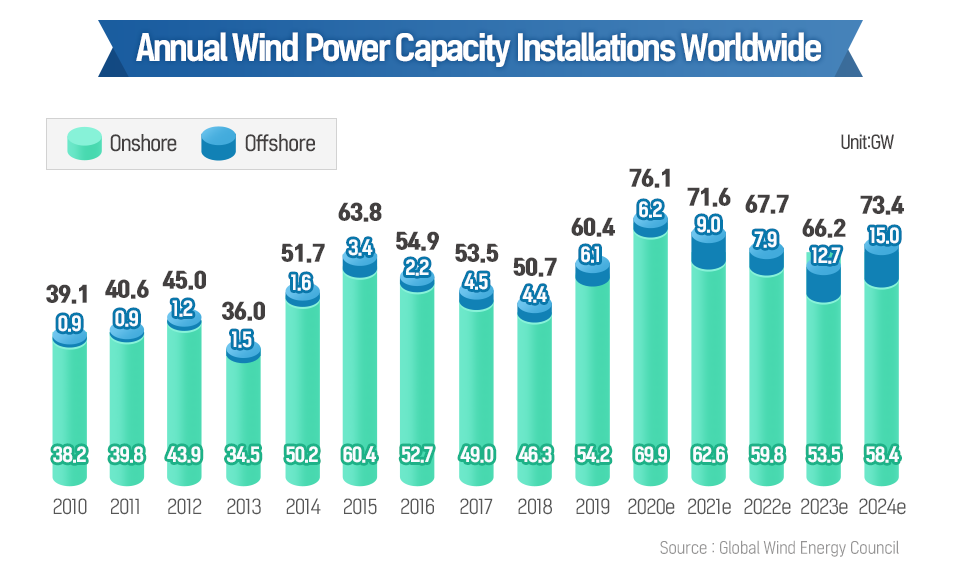 If wind power capacity expands as forecasted, we might anticipate a more eco-friendly energy consumption than coal-fired power or LNG. Now, wind turbines should be installed in places that have rough and strong winds. But wouldn’t the strong winds cause problems with the safety and durability of the structure? Also, how do offshore wind power turbines withstand seawater? Since wind turbines will certainly apply steel, I’ll have to ask Steely about it!

Steely, these days, the number of offshore wind power projects has increased tremendously. Is it safe to have such a huge structure standing in the sea like that?

Don’t worry, Greenie. POSCO has been working with wind turbine manufacturers for a long time to make safe wind power structures. As you said, wind power structures are really large and are always exposed to harsh natural environments. Also, the turbine installed on top has to keep rotating for a very long time, so there are high risks of damage or defects. That is why POSCO is equipped with various steel products for wind power structures, including the following: 1) Hyper NO: non-grain oriented electrical steel that increases energy efficiency by reducing power loss of the motor within the turbine, 2) POSCO Windpower (PosWIND): highly durable wire rods that can minimize the friction of the turbine bearing, and 3) Steel for Wind Power: steel plate that helps the tower and foundation to withstand the harsh environment. With the development of the wind power industry, Many companies specializing in wind power towers and foundations have been established. And all of these companies utilize only steel pipes. It shows that steel is an indispensable material for offshore wind power structures, and material research continues to make safe wind power structures. 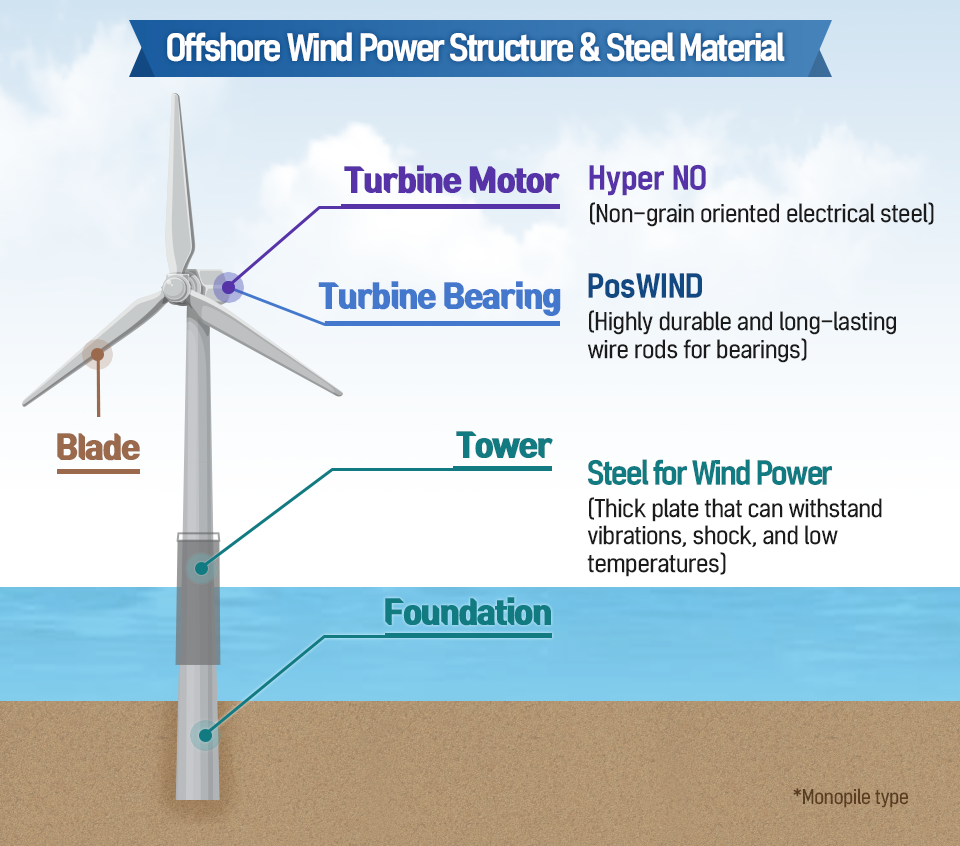 ▲ A wind power structure consists of a “tower” that provides support, a “blade” that rotates against the wind, a “generator” that isn’t visible on the outside, and a “foundation” that securely fixes the tower to the seabed.

How come steel is used as the main material for wind power structures?

It is because of the outstanding yield strength and fatigue strength of steel. The term seems complex, but the concept is simple. In general, wind power structures are designed to have a lifespan of 20 to 25 years, but they are constantly exposed to wind and waves of various directions and strength during this period. Yield strength depicts the force that a material can withstand without being deformed when subjected to an external force. If the yield strength is 355 MPa, it means that the material, when pressed with 355 MPa, can endure without any bending or deformation. However, other than 355 MPa being applied at once, it is rather the small forces repeatedly applied that can eventually destroy the material. And the strength to endure this is named fatigue strength. If the fatigue strength is 90MPa, it means that the material can withstand 2 million times of 90MPa, which is the change in stress (the difference between the maximum and minimum record). Steel plates with a yield strength of 355 MPa and a fatigue strength of 90 MPa are usually applied to the foundation of wind power structures. The steel plates used here are called “steel for wind power”.

So, you mean to say that steel for wind power is thick steel that does not easily break or bend even under repeated stress, right?

You’re right. For the foundation of wind power structures, which receives the most amount of weight, the material mainly applied is the steel for wind power with a thickness of 70 to 100 mm and the strength mentioned above. It’s really thick, isn’t it? Since the material should have various strengths, be corrosion resistant to withstand seawater, and be thick, it is difficult to produce and poses a high-cost burden to client companies. So what must be done? This is where POSCO’s solution steps in. POSCO provides applied technology securing the quality that clients desire while increasing cost competitiveness and creating optimal designs! Especially POSCO is working hard to increase the size of the material, which is the trend of the wind power structure market.

By enlarging the turbine and raising the tower higher, it becomes possible to obtain excellent wind quality and increase power efficiency. The wind power structure at Vindeby, the world’s first offshore wind farm installed in Denmark in 1991, was 54m high and had a wind power capacity of merely 0.45MW. However, recently, power structures with a height of over 190m and a power capacity of 8MW are being installed offshore. Naturally, the towers and foundations will also become bigger, right? The towers, which were formerly 5m in diameter, have been expanded to more than 6m. While the foundations, which were mainly 7m in diameter in the past, have grown to be more than 8m these days.

I’ve seen the tower above sea level, but what does the foundation of the wind power infrastructure on the seabed look like?

There are several types of foundations, and they can be largely divided into fixed and floating structures. The most popular one among them so far is the fixed structure “monopile,” which is widely adopted by global energy companies being the most cost-efficient type. The foundation of the monopile protects the tower from extreme environments, including repeated vibrations under the sea, collisions with other floating objects, and rough waves. 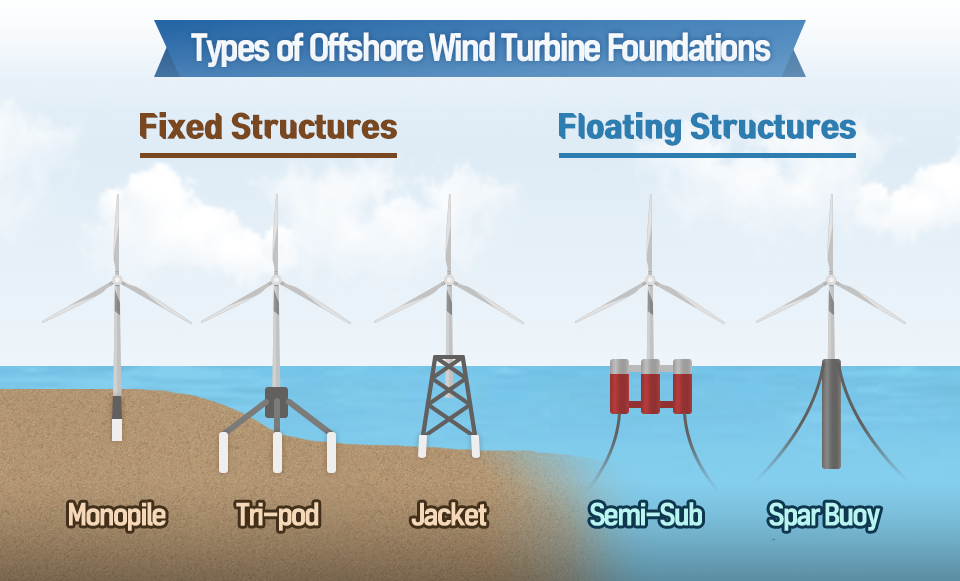 Is steel the main material for this monopile as well?

Yes. The most representative example built with this monopile type is the Hornsea offshore wind farm in England. Hornsea is the world’s largest offshore wind farm with a total of 339 wind power structures — 174 in Project 1 and 165 in Project 2 — with a total power capacity of 2.6GW. The conventional turbine capacity per structure ranged from 5 to 6 MW, but as it was increased to 7MW in Project 1 and to 8MW in Project 2, the structure became larger as well. So as of present, the monopile also reaches 8m in diameter. And POSCO’s solution has enabled the significant expansion of the Hornsea wind farm.

– “LCOE,” the hot keyword of the energy industry 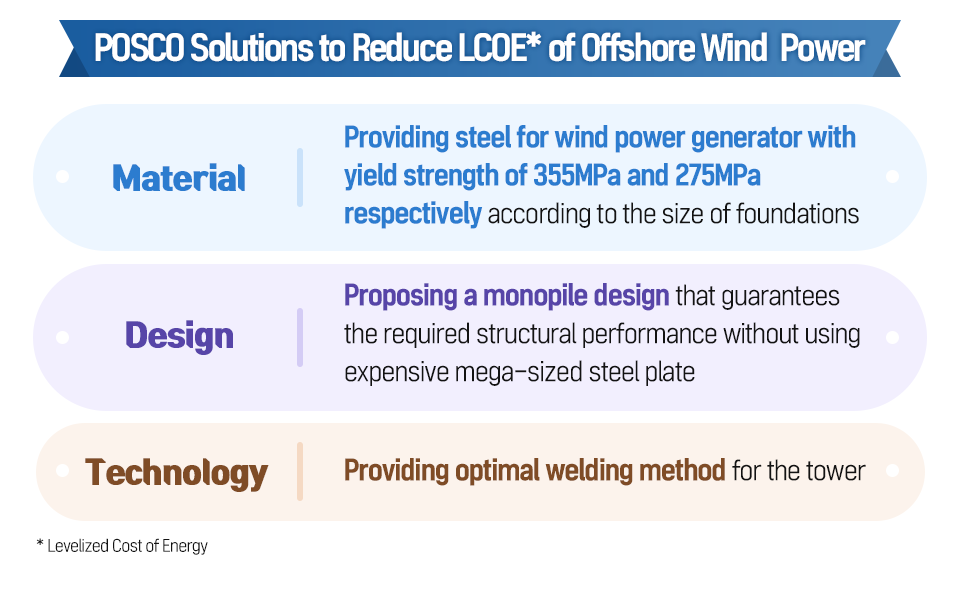 Ørsted, the global energy company operating this power plant, advanced to increase the turbine size and enhance operational efficiency. This is because high power efficiency in the long run ultimately leads to cost savings for operators. Including such cost reduction, reducing “Levelized Cost of Energy (LCOE)” is a hot keyword in the energy industry. LCOE refers to the overall estimated power production cost that includes initial investment cost, fuel cost, maintenance cost, and social costs, such as costs for environmental pollution and safety. Most of the wind farms built these days are designed to reduce LCOE. And in order to reduce LCOE, increasing the size of the power structure becomes essential.

OK. So if the power structure becomes bigger, the steel applied must be strengthened accordingly, right?

Well. You might think that it would only be sensible to use stronger steel for the towers and foundation since the structure has become bigger. But here comes the twist. Ironically, orders for steels with weaker strength began to rush in.

Huh? The tower is getting bigger, but orders are for material with weaker strength?

Think about it. For the foundation to withstand a specific load, all three factors — diameter, thickness, and strength — of the structure should be balanced. So, since the diameter and precision increase, the strength may rather weaken instead.

You’re right! The strength can be lowered because the size has increased.

Let’s suppose you were making a pillar with a diameter of 1cm with very strong material, but you decided to expand the diameter to 2cm. Since the structural performance becomes stronger, even if the strength of the material is lowered, it can still sufficiently withstand the necessary load. Besides, the change in material means that it is going to be more economical. With this reasoning and taking LCOE into account, energy companies tried to make larger foundations from steel that were a little weaker and cheaper than conventional ones. Originally, the most used steel for wind power had a yield strength of 355MPa, but now steel with 275MPa yield strength could be used as well. However, POSCO had never received an order for steel with a yield strength of 275MPa. So what do you think happened?

Well. POSCO wouldn’t have said, “Oh sorry, we’ve never made them before.”

Ah, it’s like making dumplings all at once and then deciding whether to fry them or steam them!! 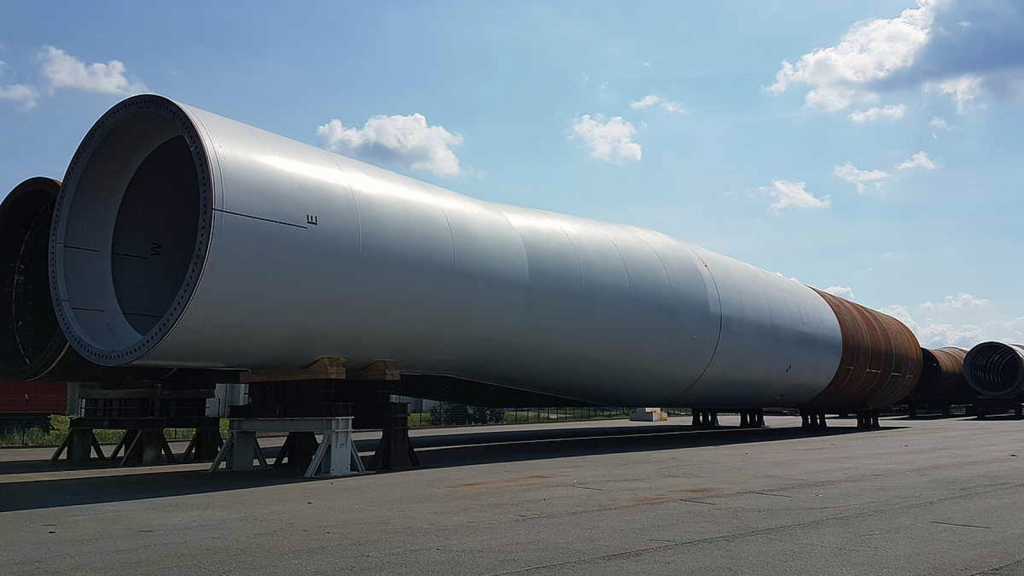 It must have been a competitive monopile design LCOE-wise!

Also, the applied technology for POSCO steel stood out. In order to ensure optimal usage of steel used in both the foundation and the tower, POSCO conducted structural analysis and mock-up tests together with the client for months and established appropriate welding technology. That’s how POSCO steel was put to use in the foundations and towers used for large wind power structures in the Hornsea 1 wind farm.

There is a reason why the world’s largest energy company chose POSCO.

Ørsted, on experiencing POSCO’s solutions firsthand, entrusted POSCO with steel supplies for the second project. As a result, about 170,000 tons of POSCO steel were used to manufacture wind power structures in the Hornsea project. You can say that POSCO’s solution is hidden behind the world’s largest offshore wind farm.

l Wind Power Growing Bigger With Steel, How Eco-friendly Is It?

Let’s take the case of the Hornsea 1 project, where POSCO steel is applied. A single wind turbine can supply 24.5GWh of clean power annually, which can reduce 11,400 tons of carbon dioxide emissions when compared to the conventional power we currently use — fossil fuel-generated power. Since a wind turbine can be operated for about 20 years, it can produce about 490GWh during its lifetime and reduce approximately 230,000 tons of carbon dioxide. It has the same effect in reducing greenhouse gas as planting 3.46 million trees.

Now that I’ve heard all about it, I hope that wind power will soon become Korea’s no.1 energy source.

According to the trend of building large wind turbines, POSCO is considering facility investment for supplying Ultra-large and thick steel and other solutions to reduce LCOE. As the global wind power market is expanding rapidly, POSCO is also trying to keep pace and provide eco-friendly solutions strategically.