An Essay on Knife by Chef Jang, a Man with Camera and Kitchen Knife 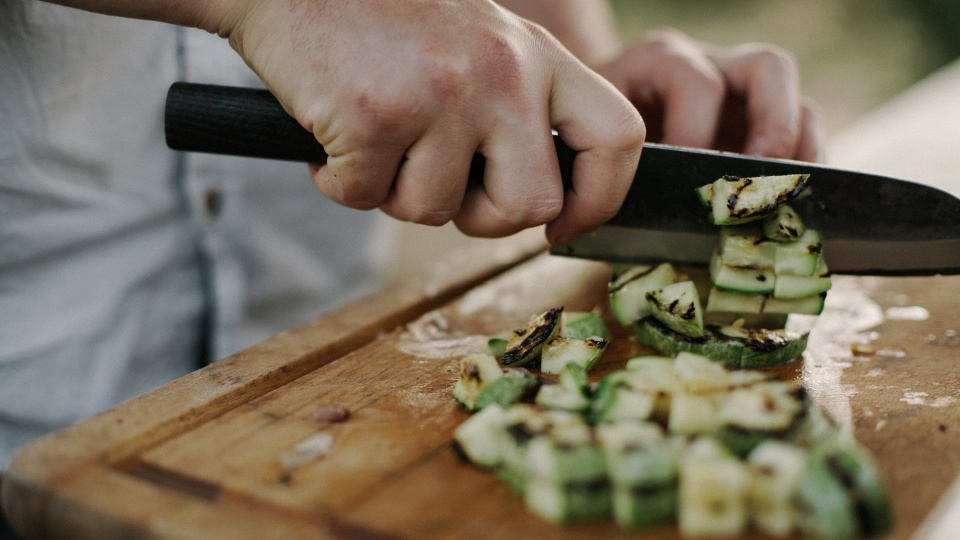 There is an old saying, “A bad workman quarrels with his tools’. Nonetheless, no craftsperson is likely to disregard the importance of a tool, and for a chef, for instance, that would be a knife. Knives come in many shapes and sizes, each made of different material. Do chefs develop a special bond with any of their knives? Do these knives come with any stories? POSCO Newsroom met with the Chef Jan Jun-Woo, a newspaper reporter who one day took off to Italy to study cooking, who is now a published author of the book, “A Chef’s Vagabonding Across Europe – avec Camera and Kitchen Knife.”

When the title of my book ‘A Chef’s Vagabonding Across Europe – avec Camera and Kitchen Knife’ dawned on me, I was prepping a meal in the small corner of a kitchen for a restaurant customer – in the town of Sicily. Of course, I didn’t travel to Europe with a knife literally in my hand. If I had, the title of my book would be somewhat different: A Guide to Food in European Prisons, perhaps. No law enforcement officials would welcome the sight of a foreign traveler with a knife in his hand.

I was fortunate enough to start my career writing for a prominent newspaper. By nature, I was a curious soul, and being a reporter would suit me, or so I thought. With each passing day, I realized news stories didn’t nurture my curious nature as much as I had expected. Bouncing around different departments within the newspaper still didn’t help spark passion inside me. The spark came from elsewhere – from cooking. I found preparing meals for and entertaining my friends and loved ones more fulfilling than scribbling away news articles on my computer. As soon as I heard myself saying, ‘If not now, when?’, I bought myself a plane ticket to Italy to learn more about cooking – before it’s too late.

As I was naturally drawn to the unfamiliar, I found myself more intrigued by Western cuisine than the Oriental cuisine. My zero knowledge in Western cuisine made me hyper-responsive to the new knowledge, so learning how to cook itself posed as less of a challenge. Without the proper contextual understanding of the food, however, I felt like a blind man touching an elephant.

I didn’t just want to learn to cook; I wanted to learn the stories behind each food. I guess I was always hungry for the answers to endless whys: why certain ingredients were preferred over others? Why did they cook pasta the way they did, etc. etc. etc. I couldn’t find answers to these questions from the confined space of a kitchen. To quench my thirst, I needed to get out – onto the streets, exploring, and talking to people. That’s how I started my journey across Europe in search of answers. In a way, I was reporting on stories about food in Europe to answer my questions. It was my cooking training guided by my – and only my – curiosity. 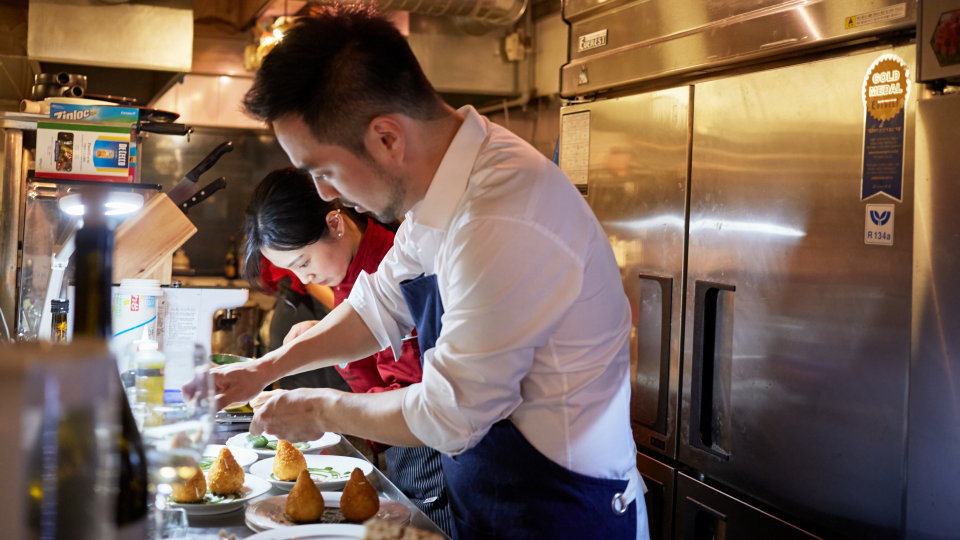 From the title of my book, ‘A Chef’s Vagabonding Across Europe – avec Camera and Kitchen Knife,’ the phrase ‘avec camera and kitchen knife’ has both symbolic and literal connotations. On the one hand, it’s an expression of my identity as a reporter as well as a novice cook telling the stories of food from a reporter’s perspective. On the other hand, both tools were my faithful companions – they were literally ‘with’ me throughout my travel in Europe. Traveling with a knife in my hand could lead to tricky situations, so to stay out of trouble, I chose a small pocket knife over a kitchen knife to carry everywhere I went.

The first knife I got my hands on was Opinel’s Slim Line 08 Beech during my travel in Italy. It was a foldable 8 cm stainless knife, small enough to carry around, and since the design was visually less threatening, I carried it inside my pocket everywhere.

Traveling in Europe, a pocket knife is essential, not optional. I came to own a pocket knife out of pure need for survival. In the land of 24-hour convenience stores like Korea, food is available 24/7 just about everywhere – but it’s a whole different matter in a small remote town in Southern Europe where one can come across a restaurant only once in a blue moon. Even if there is one, they keep their doors firmly closed except for an hour two during the meal time. Missing the right time for lunch, or dinner, meant having to starve until the next meal. No exception.

After muddling through several near-starvation, I realized I needed to do something. I decided to carry with me a few non-perishable food items like fruits, ham, and cheese, perfect for whenever I missed a proper meal. They all happened to require a tool, which was a knife. To cut salt-dried ham especially, there was simply no other alternative. A sturdy pocket knife was a good companion that allowed luxury to a tired and hungry traveler anywhere in Europe: a feast with a glass of wine.

Sadly, the Opinel pocket knife that rescued me from hunger several times didn’t stay with me for very long. Its extreme portability meant it could get lost easily. I’m not even sure when and where I lost it. Perhaps I wasn’t too attached to the knife. If the knife had been pricier, would I have been more careful with it? After losing the first Opinel, I bought the same knife again, but this time, I lost it in just three days. I decided the problem was with the knife, not me.

After vagabonding through Europe for three months, I eventually came back to Korea. I still had the chance to visit Europe a few more times after, when I finally had the chance to fill the void of my lost Opinel pocket knife. It was at a corner market in the small town in France where I met the One. The handle was made of an olive tree, and the back of the knife was quite thick, and the blade was very thin. Though it didn’t have any fancy brand name, it was a solid steel pocket knife from a nearby blacksmith. The blade had an elegant S curve, quite charming. It even came with a corkscrew hanging on one side.
Unlike the slick – perhaps too sleek – and convenient Opinel knife with which I didn’t develop good chemistry with my hand, the new steel pocket knife was quite sturdy, and I liked the feeling I got when I was holding it. To test the blade, I cut a piece of saucisson, a French-style salt-dry sausage, then the once-solid piece of saucisson was sliced like a piece of soft tofu. I’m pretty sure the knife was made by a French craftsman, and after this, this knife of no-name became my favorite. I carried it around everywhere whether in Korea or abroad – that was until it got mercilessly tossed into a trash bin at an airport security checkpoint in Portugal.

No airline would ever allow a knife inside their passenger aircraft – I KNOW. Which is why I always made sure I checked my knife with my luggage. On that particular day, however, I completely forgot to take it out of my carry-on luggage. I mustered all kinds of facial expressions and bodily gestures to gain the officer’s sympathy, but nothing worked. I still can’t forget the vivid clanking noise my beautiful knife made. My knife with an olive tree handle while getting tossed inside the cold stainless trash bin at the airport. As it dropped into the bin, my heart sank, and the sound was as good as the agonies of death. It was a break up I was neither prepared for nor wanted.

Inside the plane back to Korea, I couldn’t quite get over the feelings of loss. I knew it would be impossible to get the same kind of knife unless I fly all the way back to that small village in France, which made me even more upset. As soon as I got off the plane that day, I made up my mind like someone who recently got dumped in a relationship: that I’d never fall in love with or get attached to any other knives ever again.

After the unintended breakup with the French knife, knives became a mere tool, from an object of attachment that used to give me butterflies. Of course, if I see a nice sleek looking knife, I still want to own it, though I don’t expect to get much more than an aesthetic pleasure. Because I know it takes time to get to know a tool, and only after getting used to the tool and making it genuinely mine, it becomes an instrument that will carry out the job it’s meant to achieve. 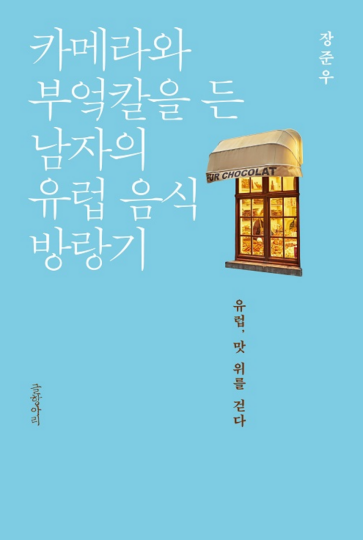 Because of the two words in the book title, ‘Camera and Kitchen Knife,’ people ask me recommendations either for a ‘good’ camera or a ‘good’ knife. I find myself perplexed every time because being ‘good’ is quite subjective depending on individual circumstances and preferences. I always give them the same answer: get the most expensive tool that their budget allows. Though it is not always the case, it’s generally true that the more expensive the price, the better the quality. We tend to get more attached to the things we pay the higher price for, and if we feel more attached to an object, we get to touch them more often. That’s how we get used to our tools.

Both cameras and knives are merely tools we hold from which we create something. Just as good cameras do not guarantee good pictures, nor do good knives automatically turn ingredients into a nice meal. At least for me, if my hands can get used to it, whatever it may be, it is a valuable tool.
Ultimately, a knife is a tool to cut something. For that, good steel material is important, but even more important is the habit that regularly takes care of the knife prepping for its use: sharpening it, for example. No matter how expensive and good quality of a knife it is, if it gets rusty or chipped, it’s just a piece of metal that can’t even cut a piece of carrot. Good for nothing.

I sharpen my kitchen knife before every use, but sometimes I ask myself: whether my mind and attitude are sharp enough; whether somewhere inside my mind, things are getting rusty.

Whenever I feel myself getting rusty, I throw myself into a new environment. My vagabonding avec camera and kitchen knife is ongoing. With a sharp perspective, I will continue traveling the world and tell stories about food and cooking. I just hope the next pocket knife I get my hands on will stay with me a bit longer.