Building exteriors and roofs are the most visible parts of buildings, while also being the most vulnerable to corrosion. Materials used in their construction should be both corrosion-resistant and aesthetically pleasing, which is why stainless steel has become a popular option for materials in a building’s exteriors. 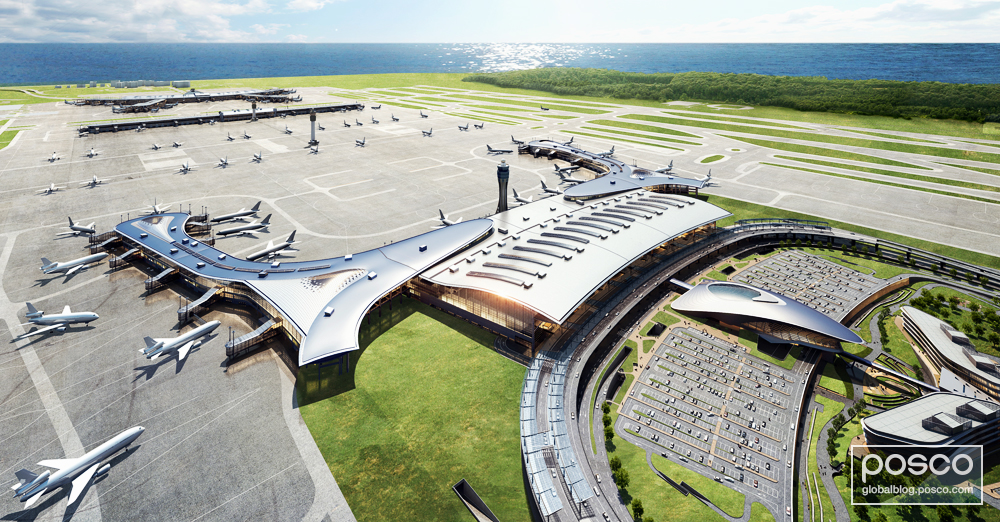 A bird’s-eye view of the second passenger terminal at Incheon International Airport. Because of its non-corrosive properties and stylish appearance, POSCO’s 446M steel will be used as an exterior material.

Incheon International Airport, the #1 in airport service quality for the last 10 years, is moving forward with construction to build its second passenger terminal to accommodate for an increase in passengers. The first passenger terminal was built in 2001 using POSCO’s 446M steel, and after 18 years, few signs of corrosion have been seen. Therefore, when planning for the second terminal, they decided to use the same type of steel along with the application of the Bead Blast process that will create a rough texture on the roof to lower the reflectivity rate for aircraft pilots during take-offs and landings.

POSCO’s 446M steel contains high amounts of chromium (26%) and molybdenum (2%) that give it superior corrosion resistance for use in exterior construction near coastal areas, like Incheon. In addition, the minimization of carbon and nitrogen make the steel easier to weld and process. Because of its low thermal expansion coefficient (the ratio of the thermal expansion of an object to temperature under a constant pressure), it is possible to make longer panels, especially when compared to materials such as aluminum or the 300 series stainless steel.

POSCO’s 329LD steel was applied to the exterior of the recently-built Kwandong Hockey Centre in Gangneung, Korea.

POSCO’s Lean Duplex 329LD steel was applied to the exterior of the Kwandong Hockey Centre , which will host events and athletes from all over the world in February 2018. The stadium is located only 7km away from the coast and it was required that the steel have at least 316L-grade corrosion resistance. Because of budget overrun concerns, POSCO recommended its Lean Duplex 329LD steel. Its corrosion resistance is above that of the required 316L steel, and because of its high strength, thinner applications of the steel could be used in the final design. In addition, vibration surface treatment was applied in order to add texture to the surface of the exterior, giving the building a more modern touch.

POSCO is also working to expand the sales of its stainless steel products in the global market. POSCO recently signed an agreement with a multipurpose apartment complex in Vancouver, Canada, and more are expected soon. Because of its corrosion resistance, beautiful aesthetics, high strength, ease of maintenance, and fire resistance, the popularity of stainless steel is expected to continue rising with architects, engineers, and the general public.